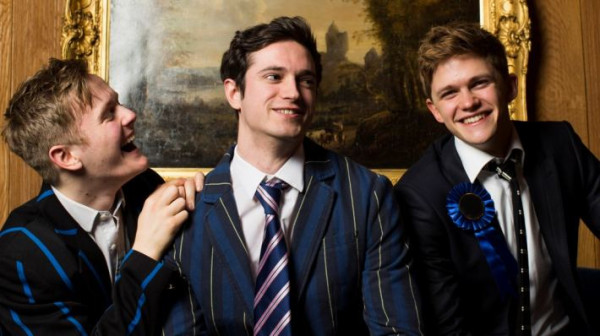 This feature was first published in Vada Magazine here:
http://vadamagazine.com/29/11/2013/arts/tory-boyz-review

Tory Boyz is a play about politics, the Tory Party, and sexuality, performed by the National Youth Theatre.

The play is particularly timely and pertinent, coming as it does in the wake of the passing of the Equal Marriage legislation by the Coalition Government led by the Tories. It addresses many questions including whether Sir Edward Heath was Britain's first gay Prime Minister, why such a high proportion of Tory MPs are gay, and whether it is now possible to be open about your sexuality as a Tory Parliamentary Candidate/MP. The writing is intelligent, sharp, funny, and perceptive, and the production showcases some exceptional young acting talent within the NYT Rep Company.

Tory Boyz is a play about politics, the Tory Party, and sexuality.

Tory Boyz originally played in the West End in 2008 and this is an updated version of the play. Written by James Graham, this production was directed by Thomas Hescott. The play is particularly timely and pertinent, coming as it does in the wake of the passing of the Equal Marriage legislation by the Coalition Government led by the Tories.

I had not seen the 2008 production, so this was my first encounter with the play, and I loved it. The writing was intelligent, sharp, funny, and perceptive, and the production showcased some exceptional young acting talent within the National Youth Theatre (NYT) Rep Company.

The play looks at the past and the present of the Tory Party by focusing on two people – the real life Sir Edward Heath, who may have been Britain’s first gay Prime Minister, and Sam, a fictional character, a gay political researcher in today’s Tory Party.

Sam is a political researcher within the Tory Party working for the Schools Minister. Right from the start, the play dispels any preconceived notions or stereotypes about who a Tory is or what he looks like. Sam is working class, from the North (Liverpool), and gay, and his Chief of Staff, Nicholas, is black. Diversity is part and parcel of the modern Tory Party in the Westminster Village, even though it may not extend to the rank and file of the Tory Party.

The play highlights the deep divide between the Tory Party’s ruling elite residing in the Westminster Village, and its grassroots supporters and activists – the blue rinse, Church of England and Daily Mail readers. The Tory Party’s rank and file are often to be found much further to the right than their more liberal leaning MPs. Grassroots Tory supporters also tend to hold more “traditional” views on sexuality and marriage, despite the Tory Party historically always having a large number of gay MPs (many of them choosing to remain closeted rather than risk being openly gay).

As one of the characters remarks, the Tory Party is the “gayest Party by a country mile”! But this ideological division between the Tory Party’s Westminster elite and its grassroots explains why the Party has often imploded over two key issues – Europe and gays. It explains why many gay Tory MPs are openly out within the context of the Westminster Village but downplay or hide their sexuality when it comes to their local constituency.

Sam’s dilemma, which is explored over the course of the play, is how far he can be open about his sexuality without damaging his prospects if he wishes to pursue a political career within the Tory Party. Whilst it is easier to be openly gay when working for the Tory Party as a Tory staffer, it is much harder if you want to climb the political ladder as a Tory MP in the public eye where you need the support of the Tory rank and file and the general public.

Nicholas, Sam’s Chief of Staff, advises Sam that it would be better, if he wants to pursue a political career, to downplay his sexuality and keep it under wraps, it may even be better to hide his sexuality altogether. During the play, it is clear that Sam is struggling with his sexuality, deliberately avoiding the Westminster gay drinks receptions, and very tentative and nervous about embarking on a relationship with James, even though he is strongly attracted towards him.

The play connects the past and the present, Sir Edward Heath and Sam, in two ways. First, Sam’s office within the House of Commons used to be the office where Heath worked as a Party Whip, and Heath’s ghost still haunts the office. Second, Sam, when he hears rumours that Heath may have been gay, starts researching Heath’s past, Heath’s files, and Heath’s writings, to try and establish Heath’s sexuality, and see if it impacted on Heath’s political career. Sam, in looking into and researching Heath’s personal life, is trying to find himself. Sam may even subconsciously be researching Heath’s personal experience to see how safe it is for him (Sam) to be openly out if he wants to pursue a political career within the Tory Party.

The play considers whether Heath was Britain’s first gay Prime Minister. It follows Heath from his childhood to his time as an MP, as he began his rapid ascent through the Party ranks. Heath’s sexuality was always open to discussion, as he was a lifelong bachelor and never married, and he remained a very private person. The play shows Heath within the Whip’s Office, keeping detailed record cards on all his colleagues’ indiscretions, including adultery, sodomy and alcoholism. But Heath’s own record card remains blank as he keeps his own personal life totally private.

The Heath sections of the play are all very strong, in particular the scenes between Heath and his childhood friend Kay, whom he was expected to marry. The scenes where Teddy and Kay are playing doctors and nurses as children; where they are courting, and Heath fails to make a move, walking away as quickly as possible in the opposite direction; and where they meet up later in life, when Kay has married someone else, having tired of waiting; are all very moving and pull at the heartstrings. Also, in relation to the Heath sections of the play, I loved the way in which the fact that Heath was a gifted musician and conductor was woven into the fabric of the play.

The play closes by bringing together the past and the present, as Heath and Sam meet and shake hands in their shared office. Heath had to be discreet and keep his sexuality under wraps to climb the political ladder. I would hope that Sam and future generations of Tory MPs are able to be openly gay without it impacting on, or hindering, their political careers.

Tory Boyz played from 23 September to 27 November as part of the National Youth Theatre’s West End Season at the Ambassadors Theatre, which comprised Tory Boyz, Prince of Denmark, and Romeo and Juliet.

Follow the link below for more information on Tory Boyz:
http://www.nyt.org.uk/tory-boyz

Follow the link below for more information on the National Youth Theatre:
http://www.nyt.org.uk/home
Collapse