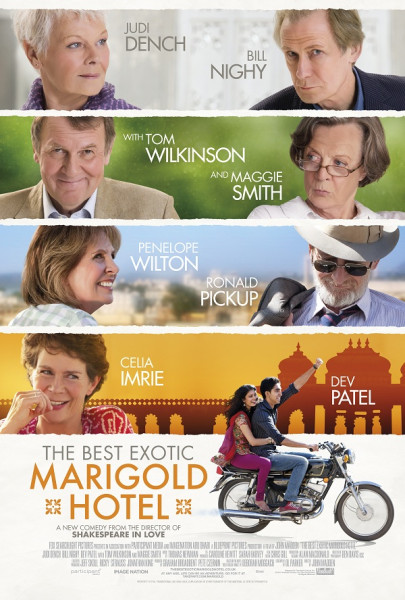 Vada Film Writers now have a Vada Film Club and every fortnight we look at a particular topic/genre and pick our favourites. This week the Vada Film Club looked at ensembles and I chose The Best Exotic Marigold Hotel.

I chose The Best Exotic Marigold Hotel which is a film about a group of British pensioners moving to a retirement hotel in India and finding that the real Marigold Hotel is very different from the luxury hotel they were promised.

The screen time is very equitably shared and each character is a detailed study of a unique individual, with all their strengths and weaknesses, foibles and prejudices. I loved the depth, richness and complexity of the relationships/marriages depicted, which are shown in all their darkness and light.

The film captures the beauty of India – the chaos, the colours, the sounds, the smells, the hustle and bustle, its sheer energy and life. And I loved the optimism that ran right the way through and its upbeat ending. Joyful.


My more detailed feature on The Best Exotic Marigold Hotel is here:
http://mycroft-brolly.livejournal.com/266101.html

You can now buy The Best Exotic Marigold Hotel on DVD at the bargain price of £3 from Amazon and it would make a great Christmas present!
http://www.amazon.co.uk/The-Best-Exotic-Marigold-Hotel/dp/B008J20Z1U/ref=sr_1_1?ie=UTF8&qid=1384692711&sr=8-1&keywords=best+exotic+marigold+hotel

You can read the Vada feature on Ensembles here to see what other Vada film writers chose as their favourite ensemble films:
http://vadamagazine.com/16/11/2013/entertainment/film-club-6-ensembles
Collapse