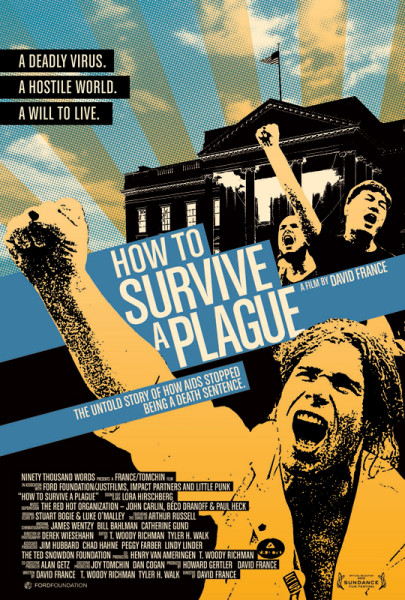 This feature was first published in Vada Magazine here:
http://vadamagazine.com/08/11/2013/entertainment/survive-plague-review

How to Survive a Plague is an uplifting and inspiring documentary which chronicles the fight by HIV and AIDS activists in the US to secure effective drugs, treatment and healthcare.

How to Survive a Plague – Review

I had the privilege of seeing How to Survive a Plague in March 2013 as part of the London Lesbian and Gay Film Festival at the BFI. I’ve waited to write about it until now because How to Survive a Plague gets a limited release in UK cinemas starting from Friday 8th November, and there are a number of special screenings taking place on 1 December 2013, World AIDS Day, at selected Picturehouse cinemas (http://www.picturehouses.co.uk/film/How_To_Survive_A_Plague/).

How to Survive a Plague is an excellent documentary which records a very important part of LGBT history. The film chronicles the fight by HIV and AIDS activists in the US, and in particular the work of activist-led campaign groups ACT UP (AIDS Coalition to Unleash Power) and TAG (Treatment Action Group), during the 1980s and 1990s to secure access to healthcare, treatment and drugs; to obtain Government money to fund research into HIV and AIDS; and to enable and empower people living with HIV and AIDS, and their carers and families, to have a say in medical research, drugs and treatment re HIV and AIDS. How to Survive a Plague is an uplifting and inspiring documentary about how HIV and AIDS activists in the US took on their own Government (one of the world’s superpowers) and won.

The documentary comprises archive footage, including in-depth interviews with key HIV and AIDS activists; films of political rallies and demos, meetings and conferences taken by the activists themselves; and news coverage. The documentary blends the personal stories of a range of individuals who became HIV and AIDS activists with the collective stories of ACT UP and TAG and is deeply moving and very powerful.

What struck me about the HIV and AIDS activists and campaigners involved in ACT UP and TAG was the strong sense of fellowship, friendship and community that they created amongst themselves. They made lifelong friends, they were a strong support network for eachother, and the activist movement itself was fun and rewarding, something that people wanted to belong to and be a part of. This real sense of friendship and community was something that came across very strongly in the film.

Another aspect that was highlighted in the film was how the HIV and AIDS activists organised themselves. They were a true collective, acting along democratic lines, and this made the organisation stronger. Everyone was allowed to speak and have a say, everyone could put forward ideas and make suggestions, and decisions were taken as a collective body. This made everyone involved in the movement feel valued and empowered and it made the organization more effective.

The film also conveyed the message that movements were stronger when people formed alliances and coalitions across traditional boundaries and acted together as one – “together you are stronger”. The HIV and AIDS movement was strongest when it worked in partnership with women’s groups, and when it was open, inclusive and welcoming to BME people as well as people from disadvantaged backgrounds. The movement was most effective when a range of people and organisations worked together to the common good.

There are two very powerful direct actions depicted in the film. The first was the Stop the Church protest staged within St Patrick’s Cathedral in New York because the Catholic Cardinal had spoken out against the use of condoms. In doing so, he was inadvertently but indirectly signing the death warrants of many Catholics. The protest included a mass die-in which was a graphic and brutal illustration that the Cardinal’s statements and policies would lead to the deaths of many Catholics, both within his own congregation and within the wider Catholic community. The second is when HIV and AIDS activists brought the ashes and bone chips of their loved ones killed by AIDS and dumped them on the White House lawn. This was a graphic and brutal illustration that the President’s inaction in response to the HIV and AIDS epidemic had resulted in the deaths of their loved ones.

One aspect of the film that is heartbreaking is when you see for yourself and realize just how many people were lost to AIDS in the late 80s and early 90s. This hit me very hard. It is very upsetting to learn that many of the inspirational activists captured in this film, fighting so hard for their rights and for the right to live, lost their lives to AIDS in the early 90s. This was one of the reasons why the activists were so motivated and driven, and why they were prepared to commit such a lot of their time and energy to the cause – they were literally fighting for their lives. HIV and AIDS was a matter of life and death for the activists involved in the movement – either they succeeded in their campaigning and secured access to drugs and healthcare or they died. This gave their campaigning an extra edge and an added urgency.

How to Survive a Plague is as much about activism and campaigning, and building and growing an effective protest movement, as it is about HIV and AIDS. It documents a very important activist-led campaign – important because it was successful and effective. It gave me hope and inspiration that no matter how strong and high the barriers in front of you, it is possible to overcome all of the obstacles in your path and win through. The film showed that activists and activism can effect change, and that direct action can and does work. It is well worth reinforcing those messages and lessons in the current political climate.

As someone who regularly campaigns on a wide range of issues, the film taught me a lot about what makes for an effective campaign and an effective direct action, what tools to use and how to go about campaigning. It also showed that political activism and campaigning can be worthwhile, effective and successful (as a campaigner, a lot of the time, you worry that your campaigning is none of these things!).

The slogan that ACT UP and TAG were using “Silence = Death” and also their chants “ACT UP, Fight Back, Fight AIDS” and “Stand Up, Speak Out, Fight Back” were new to me but they will stay with me for a long time to come because of their power, directness and simplicity.

I was hugely appreciative that the filmmakers, including David France (Director), were so passionate about their subject and had gone to such lengths to painstakingly put together this documentary to ensure this piece of activism was properly documented and preserved for posterity.

To summarize, I would say that How to Survive a Plague is an outstanding documentary and I would highly recommend it to everyone. It tells a powerful and moving story of how – when people work together collectively towards a common goal – it is possible to take on giants like the drugs companies, and even the President of the USA and the White House, to affect change and win. A truly uplifting and inspiring documentary film.