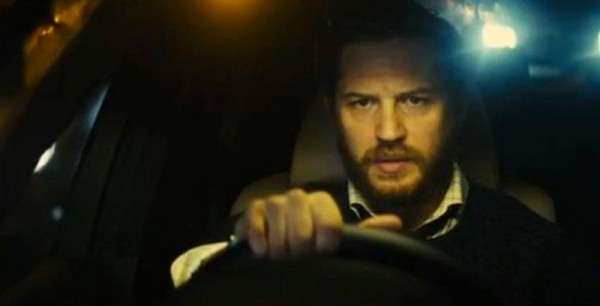 This feature was first published in Vada Magazine here:
http://vadamagazine.com/01/11/2013/entertainment/locke-review

I saw Locke as part of the BFI London Film Festival. Locke accompanies Ivan Locke, played brilliantly by Tom Hardy, on a life-changing car journey from Wales to London as his whole life unravels as a result of a single mistake. It is completely engrossing, grips from start to finish, and is a thrilling ride. The journey of a lifetime! Highly recommended.

[here be some spoilers]

Locke is a remarkable and unique film. It focuses on one character – Ivan Locke, a Welsh structural engineer (played brilliantly by Tom Hardy) – as he makes a life-changing car journey from Wales to London.

Locke is the only character you see on screen and you only encounter the other characters in this story through the phone conversations Locke has with them on his drive down to London. However you get to see all the facets of Locke’s life as you meet his employer, his work colleagues, his work associates, his wife, his children, and his one night stand, through his phone conversations.

The basic premise of the film is how, potentially, your whole life can unravel before you – despite your best efforts to hold it together – as a result of a single mistake.

In the case of Ivan Locke, that mistake is a one night stand with a work colleague which has resulted in a pregnancy and an imminent birth. Inconveniently for Locke, the baby is being born on the eve of one of the most important days of his life in terms of his work and his career. This rang true because that is often the way of the world!

At the start of the film, Locke tells his wife over the phone that another woman is giving birth and the baby is his. He has to tell her in this way, as he drives down for the birth, as the baby is being born prematurely. During this fateful car journey, as a direct result, Locke will lose his job, his marriage, his wife, his children, and his home (temporarily, if not permanently).

I found Locke a very sympathetic character because he is honest with himself that he made a stupid mistake, a mistake that he bitterly regrets, and he is taking responsibility for his actions and attempting to make amends. He wants to do the right thing by his wife, his family, his mistress, his unborn child, his employer and his building. This is a tough ask but Locke tries his hardest in very difficult circumstances. You witness exactly how much he does, and how hard he tries, in the never-ending phonecalls he makes during his drive to London. I felt very strongly that Locke was a good man with a conscience. Someone who was usually a very “solid” and reliable person, just like his concrete. But he was trapped in an impossible situation.

I admired the fact that although Locke loses his job, for abandoning the project when he is most needed, he still continues to shoulder responsibility for it, refusing to let go, ensuring that all the correct arrangements are made for the following day.

One of the things driving Locke’s actions is his father’s ghost. His dead father is a character in the film, a character that is very real to Locke, and Locke speaks directly to him on a number of occasions. We learn that Locke’s father did not do the right thing by Locke – he abandoned him when Locke needed him – and did not fulfill his responsibilities as a father. Locke is determined to be a proper father to his unborn child, not like the father he had, and that is why he is adamant that he must be there for the birth and for the baby, despite the heavy personal cost to his work and family life.

Locke tries over the course of the whole film to “fix” the situation. He is a practical man; in his work he is used to being faced with practical problems and finding solutions. However, when emotions and feelings are involved, in the case of both his wife and his one night stand, Locke comes up against problems that cannot be solved. He has inflicted long-lasting damage on his marriage through his actions and there is very little he can do now to “fix” the situation.

The film is completely engrossing, grips from start to finish, and is a thrilling ride. It does not suffer from focusing on one person’s story or from only having one character on screen. Locke was programmed in the “Journey” section of the London Film Festival and this is definitely the journey of a lifetime!

Locke observes the classical or Aristotelian unities for Drama – unity of action, a play should have only one main plot/storyline; unity of place, a play should occur in a single physical place; and unity of time, the action in a play should take place over no more than 24 hours. Locke is a film that follows one character, Ivan Locke, in his car in real-time as he drives down from Wales to London.

When Locke hits UK cinema screens I am recommending you beg, borrow or steal a ticket to see it, and accompany Ivan Locke on his life-changing journey.

Locke (2013) is a British film, written and directed by Steven Knight.

You can read more about Locke on the BFI website here:
https://whatson.bfi.org.uk/lff/Online/default.asp?BOparam::WScontent::loadArticle::permalink=locke

My features on the London Film Festival can be found here:
http://vadamagazine.com/11/10/2013/arts/bfi-lff
http://mycroft-brolly.livejournal.com/408245.html
Collapse