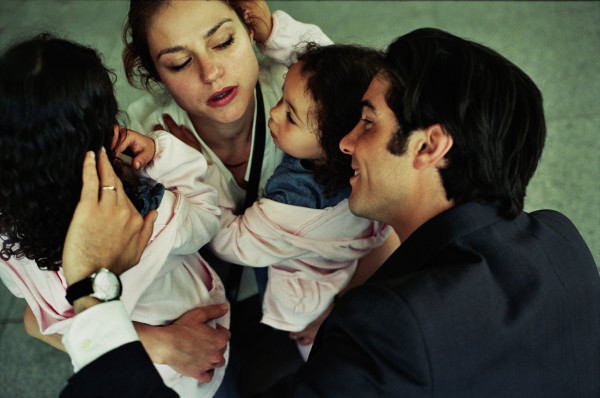 This feature was first published in Vada Magazine here:
http://vadamagazine.com/25/10/2013/entertainment/children-review

Our Children is a powerful and disturbing film, looking at depression and anxiety and based on real-life events, that will haunt you for a long time to come.

Our Children is a very difficult film to write about because of its subject matter. It is based on real events.

Our Children is an in-depth exploration of depression and anxiety and looks at the potentially far-reaching and very damaging effects of living with these mental health conditions. It explores these difficulties specifically within a family unit where there is little understanding and appreciation of these conditions, and where you may often lack support and help.

Our Children focuses on a young couple, Murielle (Émilie Dequenne) and Mounir (Tahar Rahim). We meet them when they are in the first flush of love, a young couple who are very happy and very much in love. Mounir proposes and Murielle could not be happier. She is excited and we can see her joy and excitement as she tries on her wedding dress. They are a young couple with the world at their feet and a rosy future ahead of them.

Mounir and Murielle are a young professional couple; Mounir is a doctor and Murielle is a teacher. The only slight complication is that Mounir lives with his adoptive father, André (Niels Arestrup), who is married to Mounir’s sister. André brought Mounir and his sister from Morocco (their home country) to Belgium. Mounir’s mother and his brother, Samir, remain in Morocco.

Mounir and Murielle therefore live in an extended family unit, with André and Mounir’s sister. This situation makes it very difficult for Mounir and Murielle to have any time alone together. In fact, André buys them their honeymoon as a gift and accompanies them on it!

The film then focuses on Murielle’s journey. She becomes a mother (by the end of the film she has four children, three daughters and a son); she is prone to anxiety and depression, and starts taking anti-depressives and having therapy sessions; and she has to eventually give up her job as her teacher as she becomes increasingly unable to cope. She is often alone at home, struggling with the four children, and Mounir even goes to Morocco – saying that his mother is ill and needs help – when in reality this is just a ruse because he needs a break and wants to get away. Murielle is forced to stop therapy when her therapist starts to ask too many questions and discovers that Murielle and her family doctor (André) are living under the same roof.

After that, Murielle spirals downwards. She becomes subject to crying fits, constantly feels tired and worn out, starts sleeping during the day, and her clothes and appearance become more unkempt. She is totally unrecognizable as the happy and beautiful bride of only a few years back.

Murielle starts to voice her desire to have her own place, where she can live with Mounir and her children, as one family unit. She starts to consider moving to Morocco, where they would be able to own their own house with just one salary. However the deal that is eventually struck is very different from Murielle’s dreams and aspirations. Mounir buys a bigger house in Belgium and takes André on as a paying tenant and André has paid 15 years rent in advance. Murielle’s dreams of her own home, or an escape to a different country, are shattered.

There is one particularly moving scene where Murielle is driving back from the airport. She is singling along to a track on the radio, but is overwhelmed by the power of the lyrics and the music, and she pulls over her car and, hunched over the steering wheel, breaks down, crying uncontrollably. This one scene conveys her innermost feelings of overwhelming sadness and despair.

It is interesting that Murielle’s life is, on the surface, almost perfect – she has a “happy” marriage (they are a seemingly golden couple), a handsome and caring husband, four beautiful children, and a beautiful big house. But, in reality, Murielle feels imprisoned, walled in, with no escape, and she finds it harder and harder to go on. There is no specific reason or rationale for her sadness and her despair, but they are ever-present in her life.

Murielle does cry out for help – towards the end of the film she calls her therapist again to try and seek help and support. Unfortunately, the therapist is not there and she is only able to leave a message. I have decided not to reveal the story’s ending, as that would be a major spoiler and no one would thank me for it. It is better if you go on the journey yourself, alongside Murielle.

To summarise, I would describe Our Children as powerful and disturbing. It presents a very detailed and in-depth portrait of depression, and how it can affect you so deeply that it completely incapacitates you and dominates your life. A very strong film, which will make you think and haunt you for a long time to come.

Our Children is written and directed by Joachim Lafosse and is a French-language Belgian film. It was received very favourably at the Cannes Film Festival in 2012, and is available on DVD/Blu-Ray from Monday (28th October).