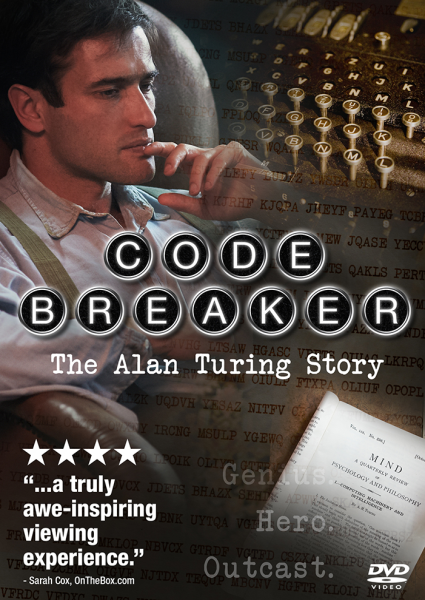 This feature was first published in Vada Magazine here:
http://vadamagazine.com/04/10/2013/entertainment/codebreaker-review

Codebreaker: The Alan Turing Story is a unique drama-documentary looking at the life and work of Alan Turing, the father of computer science and artificial intelligence, and an individual who was instrumental in helping Britain to win the Second World War by cracking the German naval Enigma Code. It is a powerful, moving and truthful account of Alan Turing’s life, his work and his achievements, based on Turing’s writings, historical records, and the accounts of those who knew him. A remarkable film about a remarkable man.

Codebreaker is a unique drama-documentary looking at the life and work of Alan Turing, the father of computer science and artificial intelligence, and an individual who was instrumental in helping Britain to win the Second World War by cracking the German naval Enigma Code.

What I valued and appreciated about Codebreaker was that it was authentic and had integrity as the drama in the film was based on Alan Turing’s writings, historical records, and the accounts of those who knew him.

In the last 18 months of his short life, Turing visited a psychiatrist, Dr Franz Greenbaum, who tried to help him. Codebreaker dramatises many of the conversations/therapy sessions between Turing (played by Ed Stoppard) and his psychiatrist, Dr Greenbaum (Henry Goodman). I liked this approach because it privileged Turing and gave him a voice, allowing him to tell his own story. Stoppard has a very expressive face and when he spoke you believed he was revealing what he was genuinely thinking and feeling; you felt as though you could see into Turing’s soul. This was an accurate representation of the therapy sessions as Turing and Greenbaum became good friends over the course of their sessions together and Turing was very open and honest with Greenbaum.

Codebreaker also features a range of interviews with Turing’s family, his friends, his colleagues, and others who knew and remembered him – talking about Turing the person – alongside interviews with contemporary experts from the world of computers, mathematics and science, speaking about Turing’s achievements. Woven together, these interviews formed a powerful, moving and truthful account of Turing’s life, his work and his achievements. The film splits its time very evenly, spending an equal amount looking at Turing the man, and Turing’s work and achievements.

I am a Social Sciences graduate obsessed with arts and culture, and I often find it difficult to understand, appreciate and/or follow scientific discussions. What I will say about this film is that I was able to follow the mathematics and the science and it allowed me to understand and appreciate Turing’s incredible contribution to the world in which we live today. Turing was an original thinker, the thoughts he had were ideas that no one else was having at the time, and his groundbreaking work laid the foundations for everything that computers do today. Put very simply, Turing’s ideas changed our world.

Codebreaker is a film that is rich in depth and detail. It would be impossible for me to write about all the aspects of the film so I have selected to write about those that spoke to me.

In terms of Turing’s work, there were two key achievements that stood out for me. First, Turing invented computers and his paper on “The Universal Machine” laid out in principle everything that modern computers do today. His subsequent post-war work at Manchester University searching for the answer to the elusive question “Can machines think?” was right at the forefront of the work in the newly emerging field of artificial intelligence. Turing was the father of computer science and artificial intelligence. Second, working as a Codebreaker at Bletchley Park, Turing cracked the German naval Enigma Code and therefore played a crucial role in helping Britain win the Second World War.

There were several aspects of Turing’s personal life that spoke to me. Turing was a loner by nature and, even though he was athletic, his preferred sport was running; a solitary sport. At his school of Sherborne he only had one real friend, Christopher Morcom, the “love” of his life (although their relationship was innocent). But fate was to deal Turing a harsh blow. No sooner had he found his soulmate than he was cruelly taken away. Morcom died from TB, leaving Turing completely crushed. His world had fallen apart before his life had even started.

Another significant person in Turing’s life was Joan Clarke. Clarke was a rarity at Bletchley Park – a woman who did the same work and had the same status as the men there and, in this, she was unique. Turing and Clarke became close and Turing made a stab at normality by proposing to, and becoming engaged to, Clarke. But Turing broke off the engagement, unable to go through with the marriage because to do so would mean living a lie. At this time it was common for homosexual men to cloak their sexuality by marrying, whilst continuing to have gay encounters and relationships outside of their marriage. The fact that Turing was not prepared to do so showed him to be a very honest person with a high degree of integrity. Turing was attempting to be true to himself at a time when this was near impossible.

But Turing’s honesty was to prove his downfall. Turing had met a young man, Arnold Murray, and had taken him home. Turing was later burgled, he suspected by an acquaintance of Murray’s, and he went to the police to report the burglary in an attempt to recover his father’s watch which had been taken. Turing put his faith in the system because he believed it would protect him, but the system let him down. The police were not interested in the burglary, or in recovering Turing’s watch; they were interested in what Turing was doing with a young man behind closed doors in the privacy of his own home. Turing told the truth and admitted that he and Murray had had sexual relations. At this time, homosexuality – in public or in private – was illegal and a criminal act. Turing was tried and convicted of “gross indecency” under the same law as Oscar Wilde and suffered the same shame, humiliation and public disgrace as the infamous writer.

Turing’s choice was to go to prison or have a chemical castration; he chose the latter. He was told the effects were reversible but this was not the whole truth. Chemical castration destroyed a man’s libido, made him impotent, shrunk his testicles, and caused him to grow breasts. Leaving aside the physical damage, which was much more long-term than doctors led their patients to believe, a chemical castration also wrecked a patient’s mind and his intelligence, making it difficult to think and to concentrate. Turing’s treatment, prescribed for him by the State, left him a physical and mental wreck. This left him very bitter and his faith in the system was destroyed. Turing’s suffering became too much for him to bear and he reached the point of no return.

In 1954, at the young age of 41, Turing committed suicide by eating an apple laced with cyanide. The British State had destroyed one of the finest mathematical minds of the day and had, in effect, killed the individual who had played a crucial role in helping Britain win the Second World War.

Codebreaker is a powerful, moving and truthful account of Turing’s life, his work and his achievements, based on Turing’s writings, historical records, and the accounts of those who knew him. A remarkable film about a remarkable man. Highly recommended.

You can watch the Trailer here:

Codebreaker is now available to rent or buy on DVD in the UK.
Collapse