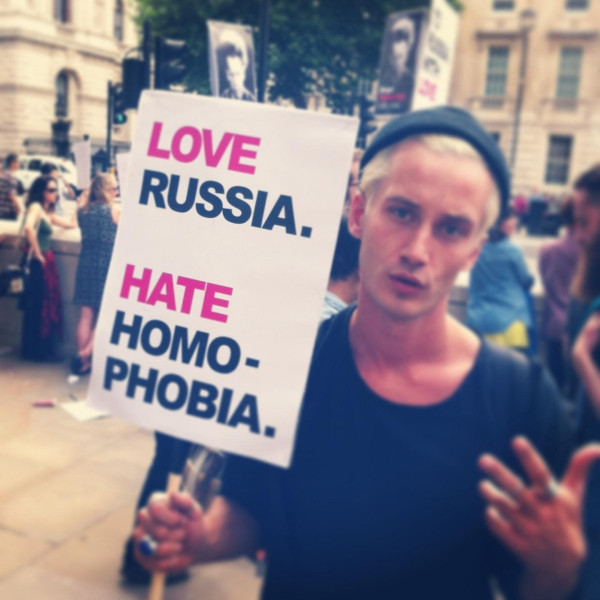 This feature was first published in Vada Magazine here:
http://vadamagazine.com/27/09/2013/arts/love-hate-human-rights-review

Love, Hate, and Human Rights by Kibo Productions was a night of new writing, comprising eight short plays on LGBT and human rights themes. The collection of eight plays was a response to the new anti-gay laws passed in Russia and other human rights violations worldwide. The plays were inspiring, engaging and thought-provoking; and all of them were exceptionally well written, directed and acted.

Last week I went to see Love, Hate, and Human Rights by Kibo Productions. Love, Hate, and Human Rights was a night of new writing, comprising eight short plays on LGBT and human rights themes, and was a response to the new anti-gay laws passed in Russia which have received international attention, sparked an international outcry and prompted international protests. Kibo Productions brought together some of London’s emerging playwrights, directors, and actors to create short plays in response to this and other human rights violations worldwide.

I have seen a lot of political theatre over the years and it can often be quite dull and dry, although worthy. What I will say about Love, Hate, and Human Rights was that I was very impressed by the quality of the writing, the directing and the acting in all of the plays; there was not a single weak link.

Based on the law of averages, I had gone along hoping that a couple of the plays would inspire and engage me. I was very surprised to find that I found all of the plays inspiring and engaging, and they all spoke to me in different ways. All eight plays were intelligent, thoughtful and thought-provoking; and they were all directed and acted exceptionally well. I would like to commend all the playwrights, directors and actors involved in Love, Hate, and Human Rights on their hard work and their talent.

It is very difficult for me to choose which plays to talk about from the collection of eight because they were all excellent, but I am going to write about four plays that particularly spoke to me. I stress that these are very much my personal choices – I am sure others who saw the production will have their own personal favourites.

Conflict Tourism by Roz Wyllie and directed by Bethany Pitts. I found this the funniest of the eight plays. It centres on three women (Mel, Donna and Cassie), childhood friends, who go on a girls weekend away together every year. The three different and contrasting personalities are brought out very strongly. Whilst Mel and Donna look forward to their weekend away with huge anticipation and excitement, poor Cassie dreads it. Cassie is the “activist”, who is always campaigning and asking the others to sign petitions, write to world leaders etc. Interestingly, both Mel and Donna put Cassie’s activism down to her not having a man which means she “overcompensates” with charity work. Finally, frustrated and fed-up, Cassie lets rip on what she really feels about their weekend away. Although initially shocked by her outburst, Mel and Donna try to understand, and their friendship survives. What I liked about this piece was its humour and its three strong women characters, all very different but 100% authentic. All three actors had their characters down to a tee. Don’t Ask, Don’t Tell by Michael Ross and directed by Victor Correia. This play was deeply unnerving. Bradley (now Chelsea) Manning is on leave and, having been dumped by his boyfriend, is having a night of wild passion with Scott, someone he has just met. Bradley explains he is a soldier, working in military intelligence. He thought the US was fighting for freedom but he feels betrayed because the invasion is “fucked up” and many of the soldiers are no better than animals, hungry for blood. He speaks of a specific incident, where he has proof that the US army killed innocent people claiming them to be insurgents, and he talks conspiratorially of his plans to leak his evidence to Wikileaks. The tone of the play then completely changes as Scott reveals he is from the army, that he has been tracking Bradley all along, and now Bradley will pay for his disloyalty. Scott goes from being a “hot guy” to a trained hitman. The punishment he metes out to Bradley is horrifying. However, Scott is merely playacting; he just wanted to see Bradley’s reaction. But the play is chilling because Bradley will be found out, the cruelty depicted will be the punishment he suffers in real life, and Bradley (now Chelsea) will be sentenced to 35 years in prison simply for telling the truth and attempting to bring war crimes to light. This play shone a light on the very high price that some individuals have to pay merely for attempting to tell the truth.

Security by Will Howells  and directed by Sarah Meadows. This play was very powerful because it looked at what happens in Britain now the new anti-terror laws have been implemented. Keith, an innocent British citizen, is taken into custody by the police (MI5) and told he is “helping them with their enquiries”. As he has not been arrested or charged, he does not need a phonecall or a lawyer, even though he is entitled to both. He is interrogated by a police officer and everything he has done is viewed as suspicious, including researching a city break in Brussels and ordering a pizza (“hold the mushroom” must be a code!). The play brought into focus how Britain, supposedly a free country and the bastion of civil liberties, has become very Big Brother in some of its activities, snooping on private citizens and their internet activities, keeping people in custody without charge, and threatening them and their families. If you dare to challenge the police, you must have something to hide. It made me think very seriously about whether the war on terror, and the new anti-terror laws, was turning Britain into something verging on a police state. Definitely food for thought. Against the Law by Tina Jay and directed by Sharon Willems. This play was very moving. It concerns the real life case of Peter Wildeblood who was tried and convicted for homosexuality in 1954 and imprisoned for 18 months for his “crime”. He was one of the first men in the UK to openly declare himself a homosexual. Wildeblood states clearly that homosexual love is real love, something to be proud of and cherished; not something that is abnormal, perverted, dirty or sick as it was perceived to be at the time. I was moved by Wildeblood’s determination to tell his story – about what it was like to be a homosexual and how cruelly he had been treated by the British establishment and the criminal justice system. The actor playing Wildeblood beautifully conveyed his fragility and his vulnerability but also his strength of character in the face of adversity. Wildeblood testified to the Wolfenden committee and its report recommended the decriminalization of homosexuality in the UK. Wildeblood’s confident assertion that things will be different one day was very powerful. Things are different today and one of the reasons is because Wildeblood’s writings on homosexuality helped to drive change.

In summary, a collection of eight short plays on LGBT and human rights themes that were all exceptionally well written, directed and acted, and that were inspiring, engaging, intelligent, thoughtful and thought-provoking.

I am going to end with a quote from Kibo Productions’s Artistic Director, Sharon Willems, who explains why they staged the plays and what they were hoping to achieve:

“My hope is that our festival will bring important political topics to the forefront with theatrical abandon, encourage everyday people like us to speak and take action on important issues effecting the world we share, and remind LGBT people living in fear in Russia and beyond that they are not forgotten. We must all stand up for communities who are being forced into silence through violence and intimidation, and at Kibo Productions we are proud to stage work that encourages debate and advocates for human rights everywhere”.

Kibo Productions’s Love, Hate, and Human Rights played from 17 to 22 September 2013 at the Barons Court Theatre. All eight plays were performed every night.