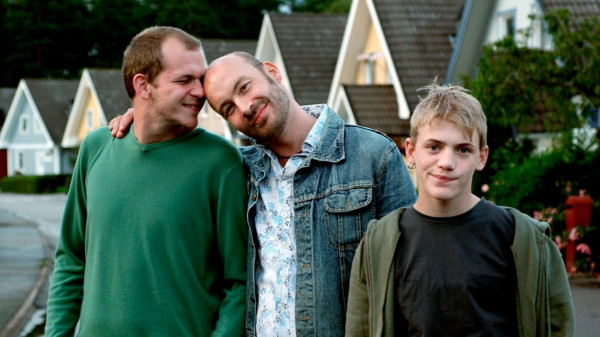 This feature was first published in Vada Magazine here:
http://vadamagazine.com/20/09/2013/entertainment/patrik-1-5-review

Patrik 1.5 is a Swedish drama film about a married gay couple who agree to adopt a 1.5 yr old toddler but get a 15 yr old teenager. It is a funny, moving, and heart-warming film looking at same-sex adoption.

I saw Patrik 1.5 (very) belatedly at the BFI last week and loved it so much I had to write about it. Patrik 1.5 is a romantic comedy, but it takes an in-depth look at a range of serious issues including relationships, same-sex marriage and adoption, and homophobia.

The premise of the film is how much chaos can result from a misplaced decimal point. A married gay couple (Göran and Sven) want to adopt and agree to take on a 1.5 year old toddler, Patrik. However the Patrik that arrives (due to aforesaid misplaced decimal point!) is a 15 year old juvenile delinquent with a criminal record. The film then follows Göran, Sven and Patrik’s interlocking stories.

To begin at the beginning, the film opens with a garden party/barbeque in a typical smalltown. Göran is new in town and his neighbours are keen to meet him and his “wife”. They are slightly taken aback when Göran instead introduces his husband, Sven. Göran and Sven proudly announce they will soon be starting their own family: they are going to adopt a child.

You see Göran and Sven preparing to welcome their new arrival and it is fairly clear that Göran wants this more then Sven. Sven already has an ex-wife and a teenage daughter. He is less of a “homemaker” anyway: smoking, drinking, and valuing his freedom. As his ex-wife sarcastically comments, on being shown around Göran and Sven’s new home, she had never expected Sven to settle down and set up home again. For Göran however, you can see and feel how important it is to conform to a “normal” life, i.e. one with a beautiful house and a lovely garden, in a respectable neighbourhood, and to have a husband and children. That is the life he craves and aspires to. The tension in their relationship because one person wants to settle down and have a family and the other wants to hold on to their carefree lifestyle is one that most couples (gay and straight) will be able to identify and empathise with.

Göran and Sven, although married, are individuals and their contrasting personalities are clearly differentiated. Göran is a family doctor; patient, kind and caring, fiercely loyal; the homemaker, who appears to have few, if any, faults. Sven, on the other hand, smokes, drinks, has a roving eye, a quick fiery temper, and is capable of aggression and violence.

I was saddened to see the routine homophobia that Göran and Sven encountered and experienced in their daily lives, and which they had to suffer and endure, even in their “respectable” neighbourhood. The homophobia they were accustomed and almost immune to ranged from local children ringing the doorbell and running away, destroying their mailbox, and shouting homophobic abuse, to the kind of hurt that cuts right to the bone when you find out by chance that one of your neighbours is having a house party and has invited everyone on the street except you.

Göran and Sven have agreed to provide a home for a 1.5 year old toddler and they have newly decorated the spare room as a “nursery”, complete with a crib and a baby monitor. However the Patrik who arrives on their doorstep is a 15 year old juvenile delinquent with a criminal record! The Patrik who arrives is so unlike the Patrik they are expecting that Göran mistakes him for their new postman. To complicate matters further, Patrik is initially very homophobic in his attitudes, accusing Göran and Sven of being paedophiles, and he is not at all happy about being sent to live with a gay couple. Patrik’s arrival marks the start of their shared adventure together.

After Göran and Sven realize they can’t simply return Patrik to social services like faulty goods because he is not quite what they ordered, the two men start to try and build a relationship with Patrik. Sven, often behaving like a teenager himself, e.g. returning home totally drunk one evening, is not really cut-out for parenthood, but the developing father-son relationship between Göran and Patrik is touching and moving. When it comes to the crunch, Göran proves his parental credentials by putting Patrik first and prioritising him over Sven because Patrik needs him and it would be very difficult for Patrik to cope with yet another rejection.

Like many children and young people brought up in care, the one thing that Patrik lacks in his life more than anything is love. I was deeply moved by Patrik’s statement that he would rather die than go back to the children’s home where he has been living which is his only option if Göran and Sven do not agree to let him stay with them. Patrik wants to be loved and to feel part of, and belong to, a family. His tough exterior conceals a soft centre which comes to the fore under the loving care of Göran. He thrives under Göran’s care and becomes a real community asset, taking on gardening jobs and teaching the local children skateboarding tricks. The film shows the transformative power of love and that it is never too late to give a child or a young person love as it can enable them to turn their lives around. Over a period of time, Patrik overcomes his earlier homophobic prejudices and sees the relationship between Göran and Sven is a loving and committed relationship that deserves respect.

The film gives a very accurate reflection of the stresses and strains of any long-term relationship over an extended period of time. At the start of the film, Göran and Sven are married, preparing to start a family, but over the course of the film their relationship comes under severe strain and they separate, only to reconcile and be reunited at the end of the film. The film’s portrayal of the ups and downs, the highs and lows, of any committed long-term relationship, was very honest. Showing the “lows” of a relationship is very unusual in a film which is, on the whole, light-hearted in tone and content, and the filmmakers are to be commended for doing so. The effect of showing both sides of the relationship was to make the relationship more believable and real.

Sven has an amicable relationship with his ex-wife, even though their marriage ended when his wife found out he had been cheating on her with Göran. Again, this was an honest depiction of real-life because when a child is involved, in this case a teenage daughter, parents have to remain civil regardless of how and why their relationship fell apart if the child is to continue to see both parents. Sven’s ex-wife and his teenage daughter are very much a part and parcel of Sven and Göran’s family and rightly so.

Unusually for a film focusing on a gay relationship and same-sex adoption, Patrik 1.5 has a happy and upbeat ending, and the closing shot is of a unique and unusual family unit that is nonetheless bonded by love.

In summary, this is a funny, moving and heart-warming film, with an upbeat message and a happy ending. Highly recommended.