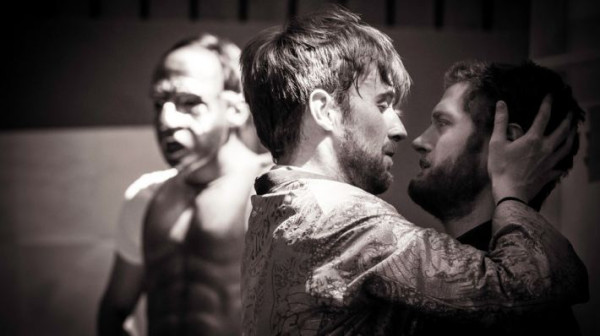 Would you risk your kingdom for love?

My 11th feature for Vada Magazine was about Edward II by Christopher Marlowe - the new National Theatre production which opened this week. I thought the production was ambitious, innovative and very powerful.

My feature in Vada Magazine can be found here:
http://vadamagazine.com/06/09/2013/arts/edward-ii-review

The National Theatre’s new production of Edward II by Christopher Marlowe opened this week. The production will undoubtedly divide critics and audiences – like Marmite, you will either love it or hate it. I will put my cards on the table upfront and say that I loved it!

For those unfamiliar with the play, Edward II tells the story of King Edward II’s reign, from his coronation to his untimely death, covering his love for his favourite Gaveston (a gay relationship), for whom he is prepared to risk everything, including his Kingdom, and who ultimately precipitates the King’s downfall; his power struggles with the Barons and the Church; Edward’s imprisonment and resignation; and the ongoing battle for succession and England’s throne. The play has had many incarnations throughout history, with a particularly noteworthy film adaptation by Derek Jarman, but I was pleased to see it hit the stage of the National Theatre. The full title of the play is The Troublesome Reign and Lamentable Death of Edward II, King of England, with the Tragical Fall of Proud Mortimer which is – in itself – a short synopsis of the whole play!

When you enter the Olivier to see this production, the first new addition you notice are two giant screens, up high, one on either side, framing the stage. These screens have a very significant role to play in this production … more later!

The play opens very strongly, with the Coronation of Edward II. Kings and Queens of England, past and present, play on the two screens as a backdrop, drummers march onto the stage, Edward II sweeps onto the stage in a regal gold cloak, swears the oaths of Kingship, and is crowned amidst much pomp and ceremony, including the singing of the national anthem. This is an attention-grabbing start to the play.

Gaveston’s entrance is ingenious. Following Edward’s Coronation, he takes the audience by surprise, springing out of a seat in the tiered side stalls – mischievous and cocky, with a swagger to match. Now Edward is King, Gaveston’s banishment will be ended and he can return to Court – to Edward, his lover and his King. As the King’s favourite, he knows he will have all the power, wealth and titles his heart desires. His star is in the ascendant.

When Gaveston returns from exile, Edward and Gaveston’s meeting clearly conveys the desire and the love they have for eachother, and the sheer delight and pleasure Edward takes in Gaveston’s company. Edward showers Gaveston with gifts, wealth and titles, much to everyone else’s displeasure, but Edward is blinded to this because he is just so happy to be reunited with his beloved Gaveston.

Coming back to the twin screens, on high, framing the stage. Throughout the production, there are scenes that the audience cannot physically see (the action is taking place behind a screen, at the back of the stage, or off-stage), but which are filmed live with hand-held cameras and projected onto the twin screens – sometimes the screens are playing the same images but, more interestingly, sometimes they are playing the same scene from different camera angles or different vantage points. This is a multi-media production, combining theatre and cinema, stage and screen, and this production merged my two favourite art forms to increase impact and effect.

One of the first times it is used is when the Barons, the Bishops and Queen Isabella go behind “closed doors” (still on stage but behind a screen) to plot how they will force the King to banish Gaveston. This device effectively conveys the political machinations and power struggles that go on behind closed doors, in secret – treason and treachery are never carried out in the open. The hand-held filming makes it feel as though you are spying on proceedings, which adds to the atmosphere, the excitement and the tension.

The contrast between Gaveston and others in the Court is highlighted by the costuming. Gaveston wears a black leather jacket, skinny jeans, and modern dress. He is dressed for a rave, for a good time, and represents informality, pleasure, fun and freedom. Edward’s other favourites, introduced to him by Gaveston, Spencer and Baldock, who appear later in the play, are dressed in a similar fashion. Meanwhile, the Bishops wear ceremonial robes; and the Barons military armour; representing formality, authority, and the heavy duties and responsibilities that Edward, as King, is burdened with. It brings out the contrast between the very different aspects of Edward’s life – his Kingship and ceremonial duties as Head of State; his military role in protecting England and keeping her safe; and his personal life, encompassing love and leisure.

The play raises questions about what is more important – power or love? Whether a Sovereign’s first duty is to his/her Nation and its people or his/her own immediate family has long been a bone of contention. For most people, it is their personal life that brings them the most happiness and contentment. That is the case for Edward and it explains why he is willing to risk everything, even his throne, for Gaveston (many generations on, another English King Edward would abdicate the throne for his Mrs Simpson).

In the ensuing power struggle between Edward and the Church, the Bishops win through and are able to force Edward to banish Gaveston again. At this time in England, there was a continuous power struggle between the King, the Church and the Barons, often resulting in Civil War, and this theme is brought out very strongly in this play. Edward’s frustration boils over and he rails against a situation where the King of England is overruled and forced to act against his own wishes. Edward poignantly remarks that the banishment papers are signed not in ink but with his tears.

The scene where Edward and Gaveston are parted, when Gaveston is banished for a second time, was 100% convincing. Their desire, their love, and their despair at being parted, was tangible. Their kiss, that seems to last forever, so full of longing, was heartbreaking. 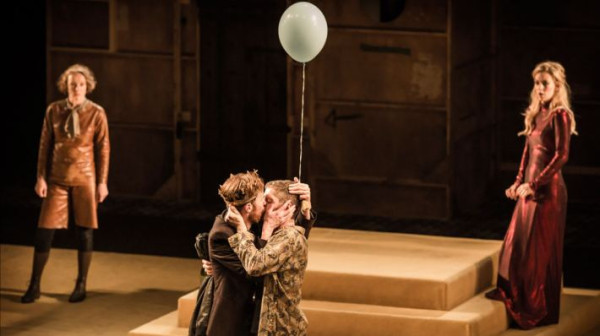 The twin screens are also used to “subtitle” the play. As someone who is unfamiliar with this play, I found it very helpful as it told me in one sentence – effectively a “headline” – what was happening in the next section of the play. This meant it was easy to follow the play’s plot and its action.

The final sections of the play, covering Edward’s imprisonment, his forced resignation, his torture, and his death, were very powerful and moving. You get a real sense, for Edward, of the walls closing in around him, of any resistance being pointless and futile, of simply giving up because his will to live has been curtailed with the loss of Gaveston. What point is there in going on when you have lost forever the one thing you truly desired and wanted? I really felt for Edward and shared in his pain. Given what is happening around the world today, I found the scenes of Edward’s torture and his own description of his suffering, including intensive sleep deprivation, deeply distressing and almost unbearable to watch. This is a bleak and cruel play, reflecting the brutality of life in England both at the time the events took place and when the play was written.

One of the most effective uses of the twin screens, and the live filming and screening, is towards the end of the play. You see Mortimer and Isabella enjoying the spoils of victory, Mortimer dressed in Edward’s gold cloak, but in the background, at the back of the stage, Edward stumbles back and forth, with the camera directly on his face. The audience sees projected onto the twin screens, for a long period of time, a close-up of Edward’s face, bewildered, disorientated and frightened, not quite taking in or believing what is happening to him. The screens are filled with Edward’s face, everyone in the Olivier can see his shock up close and personal, and those sobering images will stay with me for a very long time to come. 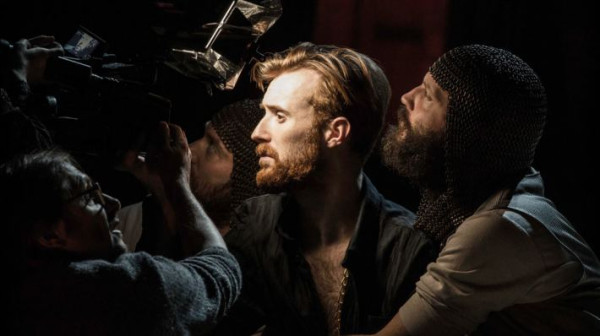 There is an unusual piece of doubling in the play. Kyle Soller plays Gaveston, Edward’s lover, and also Lightborn, Edward’s murderer. Having murdered Edward, and served his purpose, Lightborn is in turn murdered. He falls next to Edward, and they lie side by die, with Lightborn’s arm draped across Edward. They are even dragged off the stage together. This was a kinder end to the play, as it made you consider the possibility that Edward and Gaveston could be reunited in an afterlife. The two lovers lying side by side was, in itself, a powerful and moving image.

Right up until the end, I was puzzled as to why they had cast an adult rather than a child as Prince Edward/Edward III. The last ten minutes of the play answered my question as the play closes with a very rousing speech from the new Edward III which could only be delivered with such power, force and impact by an adult.

I was pleased that this was playing in the Olivier, not in the Lyttelton as I had originally thought, because the production is epic in its ambition and scope, and it deserves, and benefits from, the Olivier’s grander setting.

In terms of the acting, there are some exceptional performances, including a towering performance from John Heffernan as Edward II, Kyle Soller as Gaveston and Lightborn, Kirsty Bushell as Kent, and Bettrys Jones as Prince Edward/Edward III. The verse speaking across the whole ensemble was excellent, which meant the play was easy to understand and follow, even thought they were using Marlowe’s Elizabethan language.

Edward II by Christopher Marlowe, starring John Heffernan as Edward II and Kyle Soller as Piers Gaveston, and directed by Joe Hill-Gibbins, is playing in repertory at the Olivier, National Theatre until 26 October.

Edward II is part of the National Theatre’s Travelex Season where almost half of the seats for the production (500 tickets for every performance) are just £12 – with no booking fee.

For full production details and to buy tickets follow the link below:
http://www.nationaltheatre.org.uk/shows/edward-ii

My reaction to, and review of, Derek Jarman's 1991 film adaptation of Edward II can be found here:
http://mycroft-brolly.livejournal.com/401571.html
Collapse