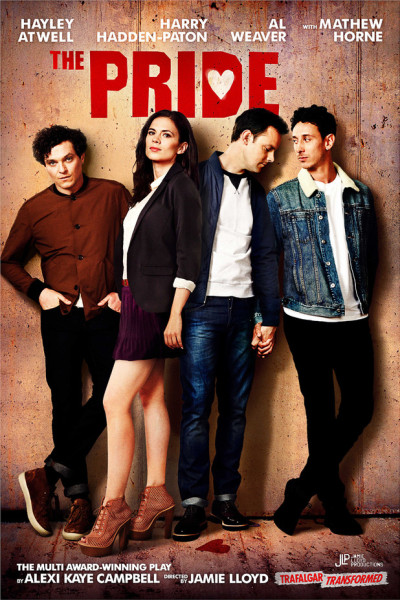 My 10th feature for Vada Magazine was about The Pride, a play examining the lives and loves of gay men in Britain in 1958 and today (50 years on). It focuses on people’s attitudes towards homosexuality and societal “norms” and how these impact on the lives gay men were/are able to lead. It is an intelligent and thought-provoking play with pitch-perfect performances from all the actors.

My feature in Vada Magazine can be found here:
http://vadamagazine.com/30/08/2013/arts/pride-review

The Pride looks at the lives and loves of gay men in Britain in two very distinct time periods – 1958 and today (50 years on). It focuses on people’s attitudes towards homosexuality and societal “norms” and how these impact on the lives gay men were/are able to lead. The play switches back and forth in time, contrasting attitudes, norms, and different lives and lifestyles.

There are three main characters in the play – Philip, Oliver and Sylvia. In 1958, Philip is married to Sylvia but is a closeted homosexual. He embarks on a short-lived affair with Oliver which he regrets because of the serious repercussions on all three people involved and on his marriage. In today’s world, Philip and Oliver are a gay couple, living together but with relationship issues, and Sylvia is Oliver’s best friend.

I found the 1950s sections of the play the most powerful. Philip is a closeted homosexual, married to Sylvia and attempting to live a “normal” life. When Oliver, who is working with Sylvia on a book, pays a visit, there is an instant spark between Philip and Oliver and they embark on an affair. Their story is heartbreaking because so much misery is caused by the simple fact that at this time (1958) society’s laws, norms and attitudes did not permit Philip and Oliver to be together as a couple.

A scene where Philip and Oliver meet to discuss their relationship highlights the contrast between Oliver who values integrity, wants to be true to himself, and to allow the relationship to develop; and Philip who insists the relationship is a mistake and must be ended immediately. It saddened me to see Philip filled with so much self-loathing and adamant that the only decent thing to do was to conform to societal norms and deny a key part of themselves (their sexuality) which he has attempted to do through his marriage to Sylvia.

One of the most moving scenes is when Oliver and Sylvia meet, a few months after Oliver’s first visit to Philip and Sylvia’s flat. As the scene unfolds, it becomes clear that Sylvia has discovered her husband’s infidelity and his affair with Oliver. To her credit, she blames neither Philip nor Oliver, and only hopes that Oliver was able to make Philip happy, something she herself has been unable to do. The pain and heartache of all involved in this hopeless situation undercuts the scene, and I found it very painful, almost unbearable, to watch.

One of the most chilling sections of the play deals with aversion “gay cure” therapy. Philip seeks medical help to “cure” himself of his homosexuality. From the Doctor’s line of questioning, it is clear he believes that all gay men have been sexually abused by older men when they were children and that these early experiences are what has made them gay. He sees homosexuality as a direct result of sexual abuse as a child, not something that someone could naturally be. The treatment to “cure” Philip was cruel and inhuman. It was also later proven to be wholly ineffective, damaging many gay men for life. This whole section made me feel very uncomfortable and sent shivers up and down my spine. I found it deeply distressing to witness the “treatment” Philip subjected himself to in his attempt to “cure” himself of his attraction to other men and, specifically, his love for Oliver. He was desperate not to be “one of them” (gay) but to be “normal”, a happily married man with a wife and children. The “treatment” does not work.

The 1950s sections of the play showed very vividly the combined effect of laws, societal norms, and people’s attitudes towards homosexuality, on the lives of gay men. It led to stigma, shame, and self-hatred; to gay men living closeted repressed lives, attempting to be straight but resorting to clandestine gay encounters; and often trapped in loveless marriages where both partners were unfulfilled and unhappy. It was a real wake-up call for me, showing how gay men lived their lives in Britain until very recently, and how gay men continue to live their lives in countries around the world.

The modern-day sections of the play are much lighter in tone and the problems faced by Philip and Oliver are contemporary relationship issues which are solvable. Philip and Oliver are a gay couple living together, but Philip takes the painful decision to leave Oliver because Oliver is addicted to sex with strangers and keeps cheating on him. The play explores what a committed relationship means and the damaging consequences of infidelity in longer-term relationships because it undermines all trust. Sex with a stranger, even if there is no connection above and beyond the sexual act, is still a betrayal of trust.

Sylvia, Oliver’s best friend, brings Philip and Oliver together for a reconciliation picnic on the day of the Pride parade and the ending is left open. In today’s Britain there is definitely a real chance for Philip and Oliver to get back together and to live a happy life together, as an out gay couple, if Oliver can find a way of staying faithful.

There are only four actors in the play and this piece relies very heavily on the quality of the acting. All four actors have to deliver believable and sympathetic in-depth character studies. In this production all four actors were excellent, delivering pitch-perfect performances on the night I went to see the play.

The continued pertinence of the play is vividly brought home during the nightly curtain call. The situation for LGBT people in Britain, although far from perfect, has improved significantly over the last 10 to 15 years. There has been real progress on LGBT rights and equality, culminating in the Marriage (Same Sex Couples) Act 2013 allowing same sex couples to marry in England and Wales. However in other countries the persecution of LGBT people continues, and certain countries have gone backwards and become more oppressive. In Russia, President Putin has recently introduced new laws criminalizing any public expression of LGBT identity or any advocacy of LGBT equality, stoking the fires of homophobia and making life for LGBT people in Russia increasingly difficult and dangerous. At the curtain call all four actors carry placards saying “To Russia With Love”, reinforcing the fact that, whilst the situation may have improved for LGBT people in Britain, the worldwide fight for LGBT rights and equality goes on.

Follow the link below to see a photo of the four actors carrying their placards at the curtain call:
http://www.standard.co.uk/showbiz/celebrity-news/curtain-call-to-arms-hayley-atwell-and-pride-cast-stage-gay-rights-protest-8760556.html

Sadly there are many men like Philip (the 1958 version) around the world today who still have to live closeted lives, at great personal cost to themselves and their loved ones. Their lives are often overshadowed with unhappiness because they cannot live lives true to themselves. I look forward to being part of a world where this is no longer the case and where people are able to live their lives openly and freely, without fear of discrimination or persecution.

In summary an intelligent and thought-provoking play, with outstanding pitch-perfect performances from all four actors. Highly recommended.

Follow the link below to The Pride's official website, which has all the production details and where you can buy tickets:
http://www.thepridewestend.com/index-thepride.php

The trailer for The Pride is here: