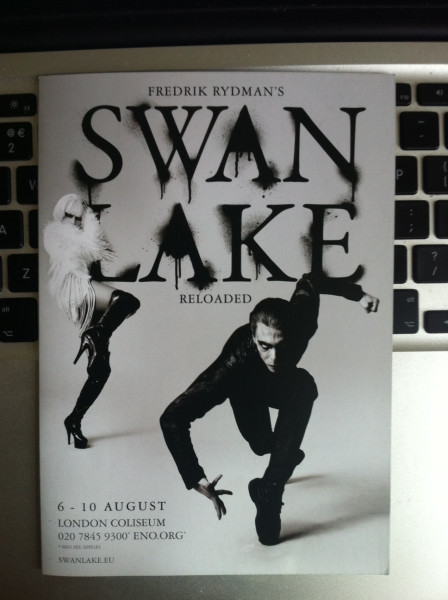 Created by Fredrik Rydman, Swan Lake Reloaded uses remixed music of the Tchaikovsky original combined with a host of Swedish and international pop and rock writers.

There are no sorcery or supernatural events in Rydman's interpretation of this Tchaikovsky classic. The story of Prince Siegfried and Odette is transported to modern times, where Rothbart uses drugs to gain and keep control over his surroundings. The swans in Rydman's production are prostitutes in white furs and shiny high heeled boots, all completely dependent on Rothbart's protection and the drugs he supplies them with.

In the struggle between good and evil, the desire for drugs and love plays a central role. Can true love break the spell just like in the original? How does the story end this time?

Swan Lake Reloaded is performed to a specially conceived and mastered soundtrack.

I see a fair amount of dance but I rarely write about it. However when I see something that completely blows me away, I write about it. Swan Lake Reloaded is one of those shows!

This has now closed but it is on tour around Europe at the moment so it is worth writing about it. Plus it may come back sometime soon - you never know!

I booked to see this show purely on the basis of the tube poster I saw for it (see image above) and the concept of "Tchaikovsky Meets Street Dance". I LOVE the music of Swan Lake, and I enjoy choreographers/companies taking the original and putting a new spin on it. I LOVE Matthew Bourne's Swan Lake with the male swans and am booked to see that when it returns to London over Christmas.

I saw Swan Lake Reloaded on Friday 9 August and I was so taken with it that I immediately booked to see it again the next day (on Saturday 10 August), which was its closing night in London and so the last chance I would get to see it. I never see dance shows more than once so that just goes to show how much I loved the show!

As the synopsis above states very clearly, this is a modern Swan Lake for today's world. I thought the way the traditional story of Swan Lake was transposed to the modern world was highly effective. Rothbart has control over the women, including Odette, not through spells and black magic, but through drugs. He is their drug dealer, and their pimp, and they are prostitutes (presumably) to fund their drug habit. This is a believable story. Rothbart is "evil", and you feel real sympathy for the women, who would like to break free of their chains, but are unable to do so because of their drug dependency. By using this lens, the production speaks about the dangers of drugs, and also the control that some men are able to exercise over women - their minds, their bodies, and their money - because they are drug dealers/pimps. I myself found Odette to be much more tragic in this production, and her desire and her attempts to find true love and break free of Rothbart's chains, much more moving. The last section of the piece is very brutal but I found it to be realistic and true to life. Rothbart rapes Odette with Siegfried looking on, which is a graphic illustration of the fact that, whilst Odette remains dependent on drugs, Rothbart will always have power and control over her no matter how much she loves Siegfried and struggles to break free.

I really enjoyed the modern setting, the street dance, the new choreography, and the scenes of the dark side of a thriving city's night life. I thought that by having a contemporary setting, telling the story in a new and different way, and by using street dance and a remixed modern score, this production was much more powerful and impactful, and it moved me profoundly and deeply. It also made Swan Lake accessible and understandable to new audiences, especially young people, who would find this version, and this telling of the traditional story, much easier to relate to.

The dancing by the whole ensemble (only 10 dancers in total) was out of this world. The energy and zest they brought to the production was phenomenal. I genuinely think you can tell when actors/dancers really believe in the work, and "feel" the work. I sensed that all the dancers were very passionate about this piece and believed in it - that came through very strongly.

I loved the two male leads who were both utterly convincing as their characters - Robert Malmborg as Siegfried and Daniel Koivunen as Rothbart. I also wanted to make a very positive comment about the female dancers and the body shapes used in the production. I am so used to seeing ballerinas/dancers, especially in Swan Lake, who are size zero, bordering on anorexic, with no breasts, and sticks for arms and legs. What I thought was so refreshing about this production was that you got to see normal female body shapes (UK sizes 12/14/16) on stage. Real women, with breasts, and real arms and legs, not sticks. This was absolutely fantastic and should be commended and recommended.

The ending? All I will say is that it remains true to the original but has an added "kick". At the end, with Odette killed, the other prostitutes finally break free from Rothbart's chains and leave him en masse. This was an uplifting and liberating ending.

I love the music in Swan Lake and what I loved about this version was that it retained much of the original music, although it was "remixed" to give the music a more modern flavour/vibe. This worked very well.

The production ran for 90 mins, straight through with no interval. I much preferred this format because you enter the world of the modern Swan Lake, you watch the story unfold, and you are there until the end, all in one sitting. It makes the whole experience much more absorbing and intense.

In summary, this production had it all - imagination, invention, energy, and mind-blowing choreography. It was totally unique. I found it completely absorbing and utterly captivating. Loved it! Bravo!

If you have a chance to catch it on its travels, or at a future date, I would highly recommend you doing so :) 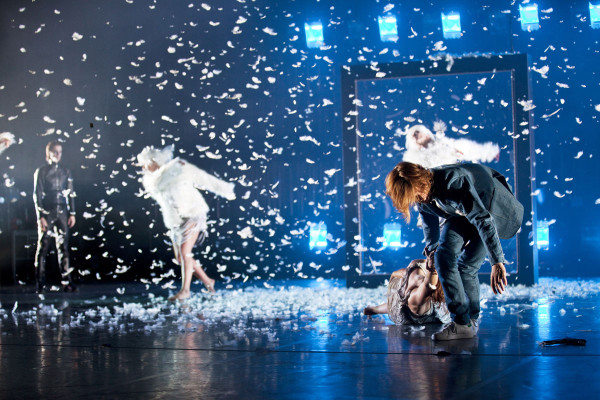 I am posting the long trailer below. It runs at 5 mins and so is a much longer trailer than I would normally post but I am posting this version because I wanted to give readers a real flavour of what I witnessed and experienced. This trailer does that!