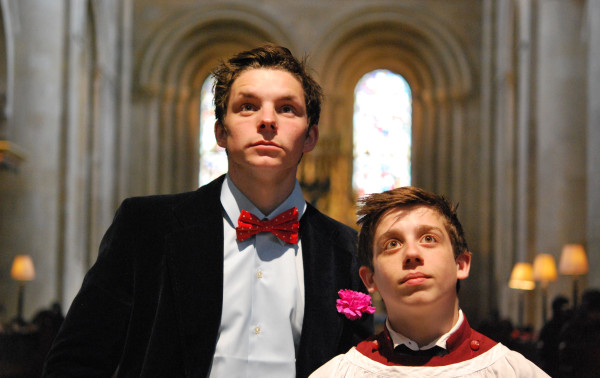 My sixth feature for Vada Magazine was about Sandel, Glenn Chandler's (creator of Taggart) new stage adaptation of Angus Stewart's 1968 cult novel of forbidden gay love between an Oxford undergraduate and a choirboy for the Edinburgh Festival Fringe.

Summary: Love among the Oxford cloisters. Beautiful coming of age gay love story. Thought provoking, challenging and powerful piece of drama. Superb performances from all three young actors. I came, I saw, I was conquered!

My feature in Vada Magazine can be found here:
http://vadamagazine.com/02/08/2013/arts/sandel-theatrical-preview

Sandel is set in the 1960s and tells the story of a gay romance between a 19 year old undergraduate at Oxford University, David Rogers, and a 14 year old choirboy, Antony Sandel.

My preview is based on seeing a rehearsed reading of the play in late May and one of its final London dress rehearsals last week.

I came to this new stage adaptation “blind” – before seeing the play, I knew nothing about it or the novel it was based on. But I was immediately gripped by the acting and the story, and drawn into the world of the three characters and their inter-locking relationships.

David Rogers (Oxford undergraduate) meets Antony Sandel (choirboy) by chance one day in the Quad. They begin a conversation, arrange to meet again, and the relationship develops from there. Bruce Lang, Rogers’s school and university friend, tries to dissuade Rogers from pursuing the relationship, influenced strongly both by his deep religious faith and his well-founded fear of what will happen to Rogers if the relationship is discovered (such a relationship was illegal then, as it is now, as Sandel is underage). However, Rogers and Sandel have very strong feelings for each other, feelings that could potentially be love, and they continue to meet, risking everything. The relationship grows. The question is where will the relationship lead them?

If you wanted to look at the play in a very binary, black and white, way you could see the Rogers’s character as being torn between the forces of good (his friend Lang) and bad (his lover Sandel). One of the audience members at the rehearsed reading even described Sandel as a “poison dwarf”. It is true that Sandel is the one continually propelling the relationship forwards and is a very manipulative character. But real life and real people are much more complex than this. Everything is not black and white; there are many shades of grey.

I did not see Sandel as “evil”. I saw him as a young boy, used to having his own way, who saw someone he wanted. He then set about pursuing the object of his desire with zeal. I believed Sandel genuinely cared for, and loved, Rogers and was prepared to do anything to allow the relationship to develop and flourish. He was happy to take risks and to hell with the consequences.

Equally, I did not see Lang as all “good”. Whilst I believed Lang’s primary motivations were to ensure Rogers’s life was not destroyed and to protect his spiritual soul, Lang himself had feelings for Rogers and this may have affected his actions. Lang had denied himself love because of his deeply held religious beliefs, and may not be able to bear seeing his best friend enjoy something that he could never have himself.

As for Rogers, I felt he had fallen in love with Sandel. He had no choice but to pursue the relationship, even though he realized it was very dangerous and, by continuing with the relationship, he was risking everything – his good name, his career and, ultimately, his freedom. I admired his courage in hazarding everything for love.

I found the romance between Rogers and Sandel believable and touching. I did not find the play “controversial”. I saw it as a very moving coming-of-age love story, pure and simple; a love story that everyone could understand and empathise with.

Most gay love stories at this time ended in tragedy and suicide as men had to be seen to be paying the price for their “sin” and their “deviant” lifestyles. What is unusual and uplifting about this play is it has an open ending, so theatregoers can decide for themselves what happens to Rogers and Sandel when the play closes. The ending can therefore be hopeful and optimistic, and not the usual tragedy that accompanies gay love stories.

My favourite form of theatre is when the onus is on the actors to tell the story and carry the play. This is a fringe theatre production and the staging, the props and the costumes are simple and spare, although highly effective. What makes this production a must-see is the quality of the acting, which is outstanding. All three actors are young (in Sandel’s case, Tom is only 18) and yet the acting is exceptional, with all three actors making their characters fully rounded human beings with real richness and depth.

The play is very effective at challenging any preconceived notions you may have about relationships where one person is underage (whether gay or straight). As the play is thought provoking and challenges you, it is a very powerful piece of drama.

Having seen the play, I was very keen to read Angus Stewart’s original novel, and this is exactly what a good adaptation should make you want to do – explore the source material in more depth. Interestingly, the novel is semi-autobiographical. Angus Stewart went to Oxford University where, as a young undergraduate, he had a relationship with a choirboy at Christchurch.

Based on the rehearsed reading and the dress rehearsal I saw; the subject matter and the content of the play; and the superb performances of all three young actors; I am making this my hot tip for the Edinburgh Festival Fringe. I came, I saw, I was conquered!

Sandel is A Boys of the Empire Production, adapted for the stage and directed by Glenn Chandler (the creator of Taggart), and based on the 1968 cult novel of forbidden gay love by Angus Stewart. Follow the link below to the official Sandel website:
http://www.sandeltheplay.com/Sandel/Home.html

Sandel will play at The Space, Surgeons Hall, venue 53, Nicolson Street, Edinburgh from 2 to 24 August at 4.05pm. 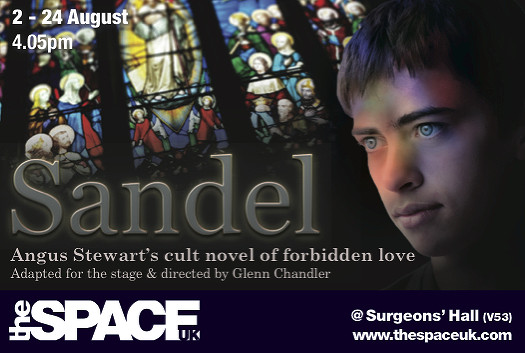 The original novel of Sandel, which has been out of print for many years, is being re-issued by Pilot Productions. The new edition of Sandel will be launched on Monday 5 August at 6pm at Word Power Books, 43-45 West Nicolson Street, Edinburgh, and Glenn Chandler will discuss his new stage adaptation of Sandel at the launch. Following the official launch, the book will be available in all good bookshops and from Amazon.

Follow the link below for details of the Sandel book launch:
http://www.word-power.co.uk/viewEvent.php?id=3070
Collapse