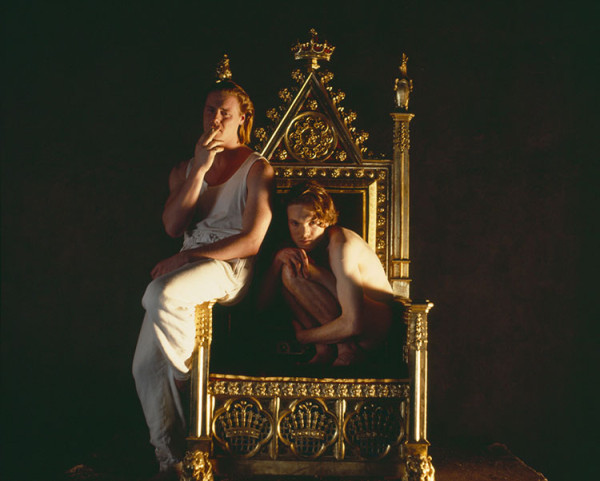 My fifth feature for Vada Magazine was about Derek Jarman's Edward II, a 1991 postmodern film adaptation of Christopher Marlowe’s play. The 1980s politics in the film remain pertinent today. Jarman was a political filmmaker and, in Edward II, Jarman uses the historical narrative to make contemporary political points.

I decide to feature Jarman's Edward II as the National Theatre is putting on a new production of Edward II, offering its own contemporary take, which will play at the National from August to October this year.

My feature in Vada Magazine can be found here:
http://vadamagazine.com/26/07/2013/arts/derek-jarmans-edward-ii-review

Edward II is a play by Christopher Marlowe published in the 1590s. Marlowe found the material for the play in Holinshed’s Chronicles and one of the reasons Marlowe may have been drawn to this particular history was the homosexual relationship between the King and Gaveston. The plot revolves around Edward II’s infatuation with Piers Gaveston, which ultimately proves to be the downfall of both men.

Derek Jarman’s Edward II was released in 1991 and the film is a postmodern take on Marlowe’s play, combining the gay love story in the play with the modern themes of homophobia and the fight for LGBT rights in Britain. Jarman was a political filmmaker and made films to make political statements and convey political messages. In Edward II, Jarman uses the historical narrative to make contemporary political points.

Edward II reflects back on the 1980s – a time of Thatcher; HIV/AIDS; the notorious Section 28, prohibiting local authorities from “promoting” homosexuality; homophobic hate crimes, attacks and murders; and a general climate of homophobia, especially rife within the State and the Church.

Edward II is a film I had wanted to see for a very long time and last year I was lucky enough to see the film on a big screen with an audience.

In the play, Edward is prepared to give up/sacrifice everything for his lover, Gaveston. For the play to work, you have to believe that. I believed that in this film. Andrew Tiernan, playing Gaveston, had a charisma and a presence that made you see why Edward would be prepared to risk everything for him. If you walked into a room you would be drawn to him, like a moth to a flame. Tiernan was completely mesmerising. After the screening, audience members spoke about the unease that he made them feel, his malevolence. I am not denying that. But dark characters can be appealing and attractive and Tiernan had a magnetic quality that made you understand the hold that he had on Edward.

There is a very powerful scene that will stay with me always. Gaveston is banished and has to leave. He walks down, a line of priests standing either side of him. As he walks down the line, they all spit at him. This was a very powerful image of the rejection of Gaveston by the establishment and the hierarchy, and I also felt Gaveston’s dejection and pain at being shunned by society and treated in this way. It was a very powerful portrayal of how the establishment can sometimes treat minorities, of how cruel the establishment can be, and how it chooses to yield its power very brutally. This started the process of Banishment, which is when society rejects you and casts you out into the wilderness; cold, isolated and alone.

The villain of the piece is Edward’s Queen, Isabella, played by Tilda Swinton. She is cold, icy, aloof, and wicked. In her portrayal of Isabella here, I saw the makings of the White Witch that she later played in the Chronicles of Narnia. Isabella had no scrap of humanity to her, no warmth, no love. She was the ultimate Ice Queen.

The police and the army, the twin agents of state control, are very much the enemy. The film is of its time and, during the urban riots and the miners’ strike in the 1980s, the police were seen as Thatcher’s agents. The film’s depiction of the police in all their riot gear was a realistic and true representation of the encounters between minority communities (including LGBT), the working classes and the police during the 1980s. The film is still relevant today as the police continue to be viewed with suspicion and distrust, and even hatred, in many minority communities.

The setting, which appears to be an old medieval castle, was perfect for this piece. It was exactly the type of place where you could become very paranoid, a place of many corridors and secret passages, where there are many places for whispers, and for treachery and treason to flourish.

The image above, which was used to promote the film, speaks volumes. Gaveston, the evil commoner, a cuckoo, squatting on Edward’s throne; usurping Edward’s rightful place on the throne; the power behind the throne.

In summary, I would say that Edward II was an excellent example of political and LGBT activism and has plenty to say to today’s audiences, 20 years after it was originally released. It remains as relevant today as when Jarman made the film and when Marlowe wrote the play.

Derek Jarman’s Edward II is available to buy or rent on DVD. A new production of Edward II, also offering a contemporary take, will play at the National Theatre from August to October this year.

Derek Jarman (1942-1994) was an English film director, diarist, artist, gardener, writer and political activist. Jarman was outspoken about homosexuality, gay rights and his own personal struggle with AIDS. He was diagnosed as HIV positive in 1986 and died of an AIDS-related illness in 1994, aged 52. His enduring legacy is his work, including Edward II.
Collapse