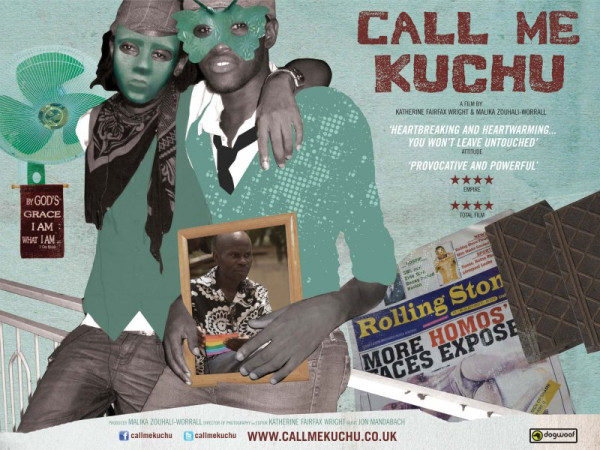 My fourth feature for Vada Magazine was about Call Me Kuchu a documentary film highlighting the fight for LGBT rights in Uganda.

In Uganda, LGBT men and women are called “Kuchus”. The documentary film Call Me Kuchu tells the story of a group of Ugandan Kuchu activists, led by David Kato, as they fight for LGBT rights in a hostile society, where homophobia is being fuelled by politicians, tabloid journalists and fundamentalist Christian pastor, and where the “Kill the Gays” Bill is before the Ugandan Parliament.

My feature in Vada Magazine can be found here:
http://vadamagazine.com/19/07/2013/arts/call-me-kuchu-review

In Uganda, LGBT men and women are called “Kuchus”. The film Call Me Kuchu is the story of a group of Ugandan Kuchu activists, led by David Kato, as they fight for LGBT equality in a hostile society, where homophobia is being fuelled by politicians, tabloid journalists and fundamentalist Christian pastors.

The “Kill the Gays” Bill is in front of the Uganda Parliament. This Anti-Homosexuality Bill proposes life imprisonment for gay sex and the death penalty for “aggravated homosexuality” (HIV positive people who have gay sex or serial offenders). The promotion of homosexuality would also be criminalized and people who fail to report gays, lesbians or bisexuals to the authorities could be jailed for three years.

I was very keen to see the film because I knew next to nothing about the day to day lives of LGBT people in Africa. I had heard what the Ugandan and Nigerian Governments were planning to do (the Ugandan Parliament is considering the “Kill the Gays” Bill and the Nigerian Parliament has passed the “Jail the Gays” Bill) and I wanted to find out what daily life was like for LGBT people living in these countries. I had heard about the pioneering work of David Kato in Uganda and I was keen to learn more about the fight for LGBT rights and equality in Uganda.

On first viewing of this film, it really packs a punch. That was largely due to the fact that I was unaware that David Kato had been murdered during the making of this film and so when this was revealed it really hit me hard in the pit of my stomach.

The American Evangelical Preachers visiting Uganda, preaching that homosexuality is a sin, against the word of God, that gays would be damned, and spreading lies about gays recruiting young people in school and sodomising them, really were the scum of the earth. Using God’s name, Jesus’s name, to spread lies and deceit, and to stir up hate, encouraging persecution and harassment, was completely beyond the pale, and sickening.

I thought this film was very effective for three key reasons:

Firstly, it showed the Kuchus as a community as it captured those times when they came together as a group to celebrate their difference and their lives, when they gathered together to fight for their freedom and their equality, and when they just met together to provide mutual help and support. I liked the fact that it showed them as part of a family and as part of Ugandan society. This breaks the myth that is all too often bandied around in Africa; that myth being that homosexuality is a Western import. It is not. Homosexuality has been part and parcel of all societies since the dawn of time.

Secondly, the film allowed me a glimpse into the daily lives of LGBT people in Uganda. The film enabled and empowered the kuchus to tell their own personal stories, in their own words, direct to camera. The filmakers of Call Me Kuchu, straight white Western women, had managed to bring these real-life Ugandan (African) LGBT stories to a wider Western audience, in a way that was accessible to a layperson who might not be informed about Africa and/or LGBT issues. This was very much appreciated by me and is to be highly commended.

Thirdly, this film was about the resilience of the human spirit. All the Ugandan activists and campaigners depicted in the film were living in fear of their lives, having to constantly move around to ensure they were safe, and were facing relentless persecution and death threats. Yet they continued being “out and proud” and doing their work because they believed in what they were doing and knew their work was helping and supporting other LGBT people in Uganda. That takes a huge amount of strength and courage and it highlights the triumph of the human spirit in the face of extreme adversity.

To sum up, I would say this film was informative and educational, and also powerful, moving and emotional. It really packs a punch.

Call Me Kuchu was released in UK cinemas last year but is now available on DVD, to watch online, to download on iTunes, or you can host your own community screening.

You can see the trailer here:


And the official UK website is here:
http://callmekuchu.co.uk/
Collapse