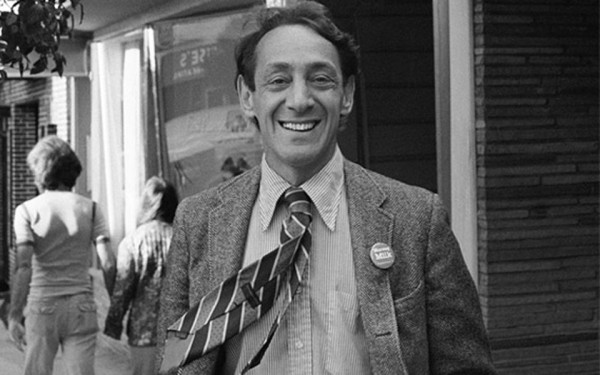 I have joined the writing/contributing team of Vada Magazine.

Vada describes itself as:
"Vada Magazine offers a new perspective, an alternative way of looking at things. Focused on the issues other magazines might not cover, or presenting the angles that others don't. We aim to be honest; we aim to encourage independent thought. Most of all, we aim to be fabulous!"

My third feature for Vada Magazine was about Harvey Milk: A Pioneer And An Inspiration For Everyone.

The feature basically uses the film Milk as a jumping off point to profile the political pioneer and LGBT rights campaigner Harvey Milk and his legacy.

Harvey Milk was a US campaigner, activist and politician who I knew very little about prior to seeing this film (Milk). Milk was the first openly gay man to be elected to major public office in the US - he was elected to the San Francisco Board of Supervisors in 1977. I was inspired by the film and it made me want to learn more about Milk and to share his remarkable life story and achievements with a wider audience.

My feature in Vada Magazine can be found here:
http://vadamagazine.com/12/07/2013/arts/harvey-milk

Harvey Milk: A Pioneer And An Inspiration For Everyone

The film Milk was released in 2008, and stars Sean Penn as Harvey Milk a US campaigner, activist and politician who I knew very little about prior to this film. Milk focuses on the final decade in the life of Harvey Milk, the first openly gay person to be elected to major public office in the US – he was elected to the San Francisco Board of Supervisors in the state of California in 1977. I was inspired by the film – it made me want to learn more about Milk and to share his remarkable life story and achievements with a wider audience.

The film has an excellent framing device in that it opens and closes with Milk sat at his kitchen table, talking into a dictaphone, recording his testimony in the event of his death by assassination. If you do not know Milk’s story it is not a spoiler for me to say that he was assassinated as this is revealed less than five minutes into the film, with the real-life footage of the President of the Board of Supervisors announcing to the press that Milk and the Mayor have been shot and killed. This is a very effective opening because it grabs your attention straight away and you want to find out who Milk was, what he did, why he was assassinated, and by whom. I thought it was a very clever way to end the film because it showed that although Milk was assassinated, his ideas, his words, the change he initiated, and the movement he galvanized, live on after his death to the present day. The assassin was able to kill Milk the man, but not the ideas or the movement.

The film shows how Milk set up his camera shop in the Castro district and how this soon began to attract a mixed group of like-minded people, and how it rapidly became a place for people to come together, talk, meet, mix, connect and hang-out. This was how Milk was able to build a grassroots community movement, with the active involvement of many young people, and it was during this time that Milk acquired his unofficial title – the “Mayor of Castro Street”. Both the US and the UK often put too much stress and emphasis on the importance of the individual, and this film shows the power of community. Milk himself was always very clear, it was not about him, it was about the community, the movement and the change that they were fighting for.

The film really captures the joy in the gay community in the Castro district at the time despite the discrimination they faced, the prejudice they endured, and the persecution they suffered from many sources, including the police who were as likely to persecute the gay community as they were to protect them. In this way, by highlighting the free spirit within the gay community, the film speaks about the resilience and the triumph of the human spirit in difficult times.

Milk believed if you wanted politicians to take gay rights seriously you needed “one of our own in office” so he decided to stand for public office to address issues such as the violent homophobic attacks and gay murders across the city. But he understood and appreciated that to run for and win public office you had to represent everyone. This meant having a very broad inclusive platform – something for everybody.

Milk ran for public office several times and failed before he was successfully elected onto the San Francisco Board of Supervisors. He even makes a joke in the film that “winning is not my strong suit”. This highlighted the importance of persistence and determination; if you want something, you should go after it and keep at it. If at first you don’t succeed, try, try and try again. Never give up.

Milk was only a City Supervisor for less than a year before he was assassinated but, even during that very short time, he managed to pass a gay rights bill in San Francisco that outlawed discrimination based on sexual orientation. This was a major achievement.

One of the key campaigns featured in the film, after Milk became a Supervisor, was the campaign against Prop 6. The Prop 6 Campaign was led by Anita Bryant and John Briggs and supported by a coalition of fundamentalist Christian organizations and Churches. Prop 6 said that gay teachers should be sacked because of their sexual orientation. Their argument was that gay people were perverts and paedophiles, and should not be trusted around children, as gay teachers would recruit school children to their deviant lifestyles. As Milk argued, Bryant and Briggs were essentially trying to “legislate bigotry in this State”.

The film depicted very clearly how religion, in this particular case fundamentalist Christianity, can be misused and misappropriated to promote hate and to persecute people. The fundamentalist Christians described the homosexuals as “evil forces”, whereas I would argue the evil forces were those that were promoting hatred of, and advocating persecution of, their fellow human beings.

A powerful speech Milk makes centres on the wording in the American Declaration of Independence “all men are created equal and endowed with certain inalienable rights”. As Milk says, “no matter how hard you try, you can never erase those words from the Declaration of Independence”. In a free and democratic society, everyone should have equal rights, and any attempt to curtail those rights and civil liberties for any group of people is normally a dangerous warning sign.

One of the tactics that Milk used to fight Prop 6 was how he asked all gay people to “leave the ghetto” and “come out” to their parents, their families, their friends, their colleagues, their employers and their neighbours. At this time because of the levels of discrimination, prejudice and persecution against gay people, often whipped up by religious fundamentalists, it was very difficult to be “out” even to parents, families and friends, as you could be thrown out of your home, shunned and ostracized, and left isolated, friendless and alone.

It took a great deal of personal courage to be “out” to your parents, families and friends, let alone to wider society, including employers, colleagues and neighbours. Milk believed that if everyone realized they knew “one of us” (ie that they knew a gay person) their feelings and attitudes towards gay people would change. He made a very strong argument that if gay people wanted real political power it was important they started to tell the truth about themselves and who they were. You had to stand up and be counted – too many people were afraid of doing so. On this firm foundation, you could build a strong activist movement, campaigning for equality and change.

This definitely inspired me never to be afraid of standing up and being counted, even if this made you different, an outsider and a minority; ultimately you have to stand by your principles and stand up for what you believe to be right.

Unbelievably, against all the polls and the predictions, and surprising even himself and his team, Milk won the campaign. He achieved the unthinkable and defeated Prop 6. This win, against all the odds, restored my faith in humanity – you can win a campaign if you have right on your side and ordinary people are perfectly capable of making the right decisions and the right choices if you appeal to their humanity and their better nature.

Milk wanted his legacy to be a movement that would continue onwards and upwards, going from strength to strength. A movement for equal rights and equality, that was not just about gay rights, but encompassed Blacks, Asians, Seniors, Disabled, and other disadvantaged groups. I would hope others would take this on board and sign up to campaigning for equal rights and equality for everyone, not just their own particular special interest group.

Milk was the first openly gay man elected to major public office in the US – this was a remarkable achievement and Milk was a true pioneer. But being a pioneer often involves following a very long, hard and lonely road, and making a huge number of personal sacrifices for the greater good. During the course of the film his long-time partner Scott Smith leaves him because Milk’s life has become a series of campaigns with little time for a personal life, and his new lover Jack Lira hangs himself as he feels neglected by Milk. Towards the end of the film, Milk is back to being a single man, often lonely, with no one to share his life with although Smith remains a very good friend. The film vividly shows how Milk achieved what he did at great personal cost to himself and to his partners. Power often comes with a very high price tag.

Like Mahatma Gandhi, Martin Luther King, Malcolm X, and numerous other civil rights campaigners and activists, Milk ended up paying the ultimate price for his activism and his campaigning – he was assassinated. He had received numerous death threats since the start of his campaigning, and they grew in intensity and ferocity as he became more successful and gained political power. Milk never let death threats stop him from doing anything; he carried on regardless. He had even resigned himself to the fact that he probably would be assassinated and had prepared for it by recording his testimony to be played in the event of his death by assassination. That takes a huge amount of personal courage and resilience. It brought home to me the hard work that so many people have done, and the very high personal cost that they have often paid, over so many generations to win for us the civil liberties and the freedoms that we often take for granted.

But I wanted to end on an uplifting note so I will close with one of Harvey Milk’s most powerful messages, which will stay with me always, and it centres on ‘Hope’. Milk was very clear that you had to give everyone, and in particular young people, hope – “Hope for a better life; hope for a better world; hope for a better tomorrow. You can’t live on hope alone but, without hope, life is not worth living”. I concur wholeheartedly.
Collapse