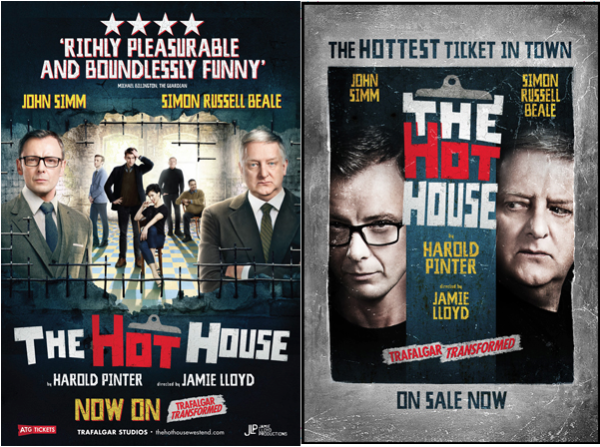 It's Christmas Day in a nameless state-run mental institution where the inmates are subjected to a tirade of mindless cruelty. A maniacal and self-obsessed leader breeds a contagion of hierarchical savagery amongst his staff, who thrive on a noxious diet of delusion and deceit.

The day got off to a lousy start! A death and a birth. Absolutely bloody scandalous! Is it too much to ask - to keep the place clean?

Under a veil of devilish wit and subversive humour, Pinter's biting political commentary on the perils of unchecked power is as vital and pertinent today as when it was written in the 50s.

Follow the link for all the details and to book tickets:
http://www.thehothousewestend.com/index-hothouse.php

I have wanted to see this play ever since it opened for two key reasons - the subject matter of the play (I have a morbid fascination with asylums!) and John Simm. Later on, I discovered that John Heffernan (Peter in Emperor and Galilean) was also going to be in the play and so I was even more tempted to go and see the play. However, ticket prices at the Trafalgar Studios are expensive so I had to wait until I could find a special deal. I eventually managed to get a theatre and meal deal through lastminute.com which was just fab!

I FINALLY got to see the play tonight - Thursday 11 July. I was very excited in the run-up to seeing the play and my expectations were sky-high. I was not disappointed!

I arrived to find I had been given an on-stage seat which I was thrilled by. It meant I could see all of the actors up close and personal and that always gives me a thrill. Although my on-stage seat was at the back of the stage what I will say about this production is that it is truly played in the round, so the fact that I was facing in the opposite direction to the vast majority of the audience did not matter and did not affect my enjoyment of the play one jot. It is very hard to genuinely play in the round and so all the actors are to be commended for pulling it off!

All I wanted to say about the play and the production was that I absolutely loved it and I thought it was outstanding. For me, it was one of the best things I have seen this year and it would definitely make my top three, along with The Low Road at the Royal Court. The play was very dark but also incredibly funny - a very rare combination!

In closing, I will make a very random comment. Having seen John Simm's performance in The Hothouse I would be very interested in seeing him take on Malvolio in Twelfth Night - if you have seen this production of The Hothouse you will know what I mean!