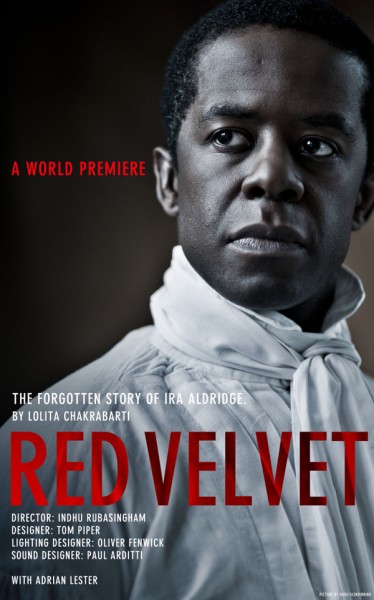 The multi award-winning production which became one of the must-see shows of 2012 returns to the Tricycle for a limited run prior to its New York transfer!

Theatre Royal, Covent Garden, 1833. Edmund Kean, the greatest actor of his generation, has collapsed on stage whilst playing Othello. A young black American actor has been asked to take over the role. But as the public riot in the streets over the abolition of slavery, how will the cast, critics and audience react to the revolution taking place in the theatre?

Lolita Chakrabarti's play creates imagined experiences based on the little-known, but true, story of Ira Aldridge, an African-American actor who, in the nineteenth century, built an incredible reputation on the stages of London and Europe.

Follow the link for all the details and to book tickets:
http://www.tricycle.co.uk/current-programme-pages/theatre/theatre-programme-main/red-velvet/

I was privileged enough to see Red Velvet during its original run at the Tricycle last year - I saw it on Monday 19 November 2012 and I absolutely loved it!

I was blown away by the piece - especially the quality of the writing (new writing, genius writing) and the ensemble acting - and I was mesmerised from start to finish. I thought it was outstanding and it quite simply took my breath away.

What I loved about the play and the production was the high energy, the drama and the passion brought on to the stage by the whole of the ensemble, all of whom were excellent. The piece was acted with real passion, drive and 100% commitment by all of the actors, and I felt their performances were all very heartfelt. I felt their energy and their passion for the play and the actors made me care about the characters in the story.

The play itself blows the lid off race and racism in Victorian London, and I felt that the themes, the issues, and the emotions explored in the play were still relevant and pertinent today. The play made me think - and that is what I go to the theatre for. The play examined and analysed race in the Victorian era by exploring Ira Aldridge's life story. This made the the play's subject matter and "politics" accessible and engaging to everyone.

Finally, the play's focus is "Othello", one of my favourite three Shakespeare plays of all time (the others being The Merchant of Venice and The Tempest), which was yet another reason why I fell in love with it!

It is returning to the Tricyle next year (2014) for a limited run prior to opening in New York so my strong advice is for you to get your tickets in now!
Collapse