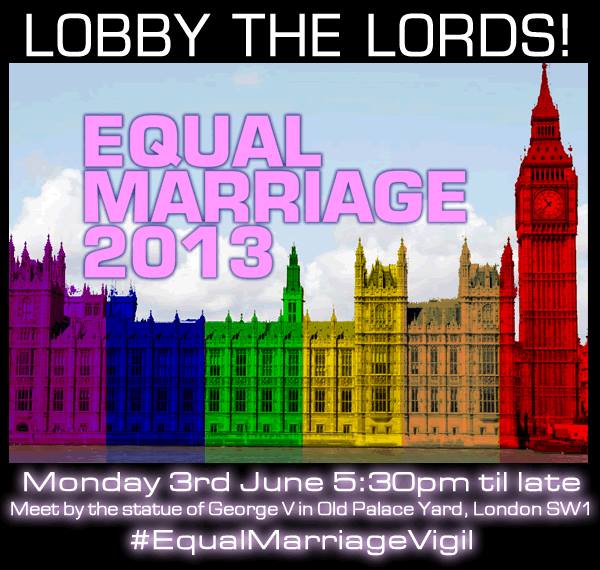 On Monday 3 and Tuesday 4 June the House of Lords will be debating and voting on the Marriage (Same-Sex Couples) Bill - the Equal Marriage Bill.

If you support Equal Marriage, and are in London, please join us for an Equal Marriage Vigil outside the Lords on Monday 3 June, 5.30pm till late, as the Lords debate the Bill.

The crunch vote will be on Tuesday and the outcome of the vote hangs on a knife-edge, so it is really important to have a strong visible presence outside Parliament to show our Peers that the vast majority of British people support the Bill and Equal Marriage.

Read about how close the vote is here:
http://www.gaystarnews.com/article/gay-marriage-knife-edge-majority-just-10-ahead-uk-lords-debate310513

If you can't come and join us at the Vigil, you can still use your voice by lobbying a Lord. Find out how to do so here:
http://lobbyalord.org/

If you are coming on Monday, see you there, if not please Lobby a Lord! 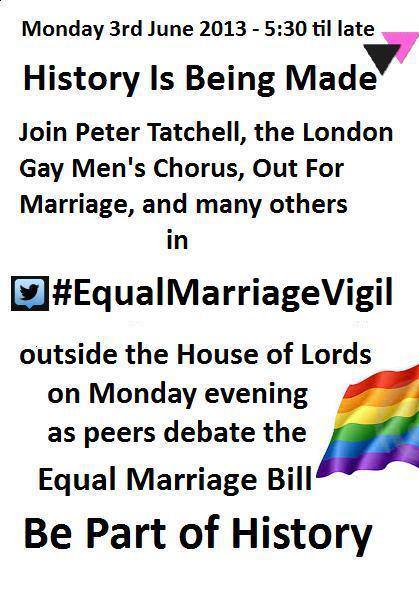 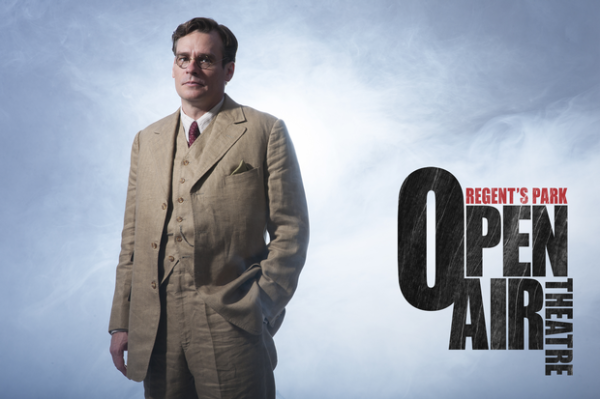 Today (Saturday 1 June) I went to see the matinee performance of To Kill A Mockingbird at the Open Air Theatre in Regent's Park.

Cut and pasted from the Open Air Theatre website:

“Mockingbirds just make music; they don’t do one thing but sing their hearts out. That’s why it is a sin to kill a mockingbird”

Set in the Deep South, Harper Lee’s Pulitzer Prize-winning novel sees racial injustice envelop a small-town community. Through courage and compassion, lawyer Atticus Finch seeks the truth, and his daughter, Scout - a young girl on the cusp of adulthood - brings new hope to a neighbourhood in turmoil.

Following his productions of The Crucible and Lord of the Flies, Artistic Director Timothy Sheader rediscovers this enduring classic in the open air.

Follow the link for all the production details and to buy tickets:
http://openairtheatre.com/production/to-kill-a-mockingbird

I booked to see this because I LOVE the novel "To Kill A Mockingbird". I was taught it at school by my favourite English teacher, Mr Birks, who gave me my passion for drama and theatre. I re-read the novel every few years, and have many different versions, including a couple of lovely editions.

To Kill A Mockingbird is one of my favourite novels of all time and it really speaks to my heart.

What I like about the novel is that it is told entirely from Scout's point of view - so you see these events as a child sees them and experiences them.

I have always found the character of Atticus Finch to be truly inspirational, because he stands by his principles, stands up for what is right, against pretty much the whole of the white population of Maycomb county.

He sticks to his guns because he firmly believes that what he is doing is the right thing to do. A strong theme in the novel is standing up for what you believe to be right and following your conscience.

Atticus Finch is a character I aspire to be.

The novel clearly depicts how Black people (negroes) were treated in the Deep South at that time and reveals the racism that ran through society, infecting hearts and minds.

Tom Robinson, an innocent Black man, is convicted of rape, even though as Jem observes so clearly, the evidence is very clear that Tom is innocent.

I love all the characters in the novel, White and Black, but especially Atticus, Jem and Scout Finch. I also love the portrait of small-town America, in the Deep South - its characters, its attitudes, its accents.

I was really looking forward to seeing this production because I have really loved and valued the work of the current Artistic Director at the Open Air Theatre, Timothy Sheader.

I loved his Lord of the Flies, The Crucible and also Into the Woods.

So I was really looking forward to seeing what he had done with To Kill A Mockingbird, as Timothy is the Director of this production. I was not disappointed!

- It had the most inventive - and the best - opening I have seen for a long time. The cast were dispersed amongst the audience, on all levels, on all sides. One after another they got up, with the novel in their hands, stood on their seats, and read out a few sentences from the novel, setting the scene. Once they had all read a section, they got down, and walked towards and onto the stage. I LOVED that! The effect was to integrate the cast with the audience, and to draw the audience into the world of the play right from the off.
- When you arrive at the theatre, all there is on the stage is a tree. When the actors get onto the stage, they each take a piece of chalk and draw some of the set onto the floor of the stage. What you have at the end of 5 minutes is a map of the street that the Finches live on, with the road, its houses, and arrows pointing to the town, the jail, the dump, the school etc. I thought that was a stroke of genius!
- Robert Sean Leonard, the star name playing the heavyweight role of Atticus Finch, does not arrive onstage until half an hour into the production. But you barely notice because that first 30 mins recreates the street that Atticus and his children live on and the town of Maycomb County which is their home.
- After the interval, a fair proportion of the action takes place in the courtroom, and the audience of the play becomes the jury. You are very much a part of the packed courtroom that hot and fateful day in Maycomb county.
- For me, the cast brought the novel vividly to life on the stage - all the nuances, all the key scenes, all the characters, were there. I can't give a production higher praise than to say that it stayed true to the novel, brought it to life, and recreated the whole world of the novel on the stage.
- The whole of the cast was AMAZING. Most were playing multiple roles. But I wanted to give a special shout out to the three child actors playing Scout, Jem and Dill. They are all big parts in the production, the production hinges on their performances, and they were all just brilliant - very natural too.

I would like to congratulate both the creatives and the cast for bringing a novel I love so much so vividly to life on the stage and for staying true to the book and holding to its integrity.

I would like to close with one of my favourite quotes from the novel, which is a piece of advice that Atticus Finch gives to his daughter Scout:
"You never really understand a person until you consider things from his point of view - until you climb into his skin and walk around in it."

This production captured the spirit of the book and I LOVED it! Absolutely outstanding. Perfection. Bravo to creatives and cast!