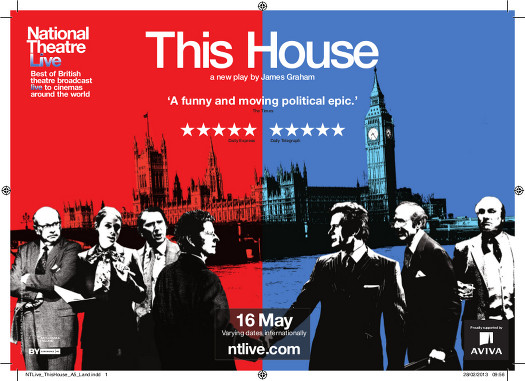 This House gets its NT Live today, so it will be broadcast live from the National Theatre into cinemas across the UK and around the world.

1974. The UK faces economic crisis and a hung parliament. In a culture hostile to cooperation, it’s a period when votes are won or lost by one, when there are fist fights in the bars and when sick MPs are carried through the lobby to register their vote.

Let those on the continent cooperate and hug and kiss each other on the ruddy cheek. Here in Britain, one party governs and we get things done.

It’s a time when a staggering number of politicians die, and the building creaks under idiosyncrasies and arcane traditions.

A minority government? No one with any sense or gumption gives you more than a matter of weeks. You’re gonna fall, and fast, and hard. So start finding things to land on. Now.

Set in the engine rooms of Westminster, James Graham’s This House strips politics down to the practical realities of those behind the scenes: the whips who roll up their sleeves and on occasion bend the rules to shepherd and coerce a diverse chorus of MPs within the Mother of all Parliaments.

This country is being kept alive on aspirin when what it needs is electric bloody shock therapy.

Following a sell-out run in the Cottesloe, James Graham’s acclaimed play transfers to the Olivier Theatre from February 2013.

I have been lucky enough to see this production live at the National Theatre, both in its original home in the Cottesloe and also in the Olivier.

The set in both theatres is simply stunning. A key part of the set is a recreation of the House of Commons. As a civil servant, I have been to the Commons many times and I can honestly say that the first time I walked into the Cottesloe, with the This House set in situ, it really felt like walking into the Palaces of Westminster. In both the Cottesloe and the Olivier the National Theatre have managed to have audience members seated on the benches in the Commons and this really adds to the atmosphere of the piece.

I actually think the show is better in the Olivier than it was in the Cottesloe. I feel the play benefits from having a bigger space to fill and play in. After all, the play depicts momentous events and affairs of state and I feel the Olivier is a better stage for the play because it gives it added grandeur and gravitas, which is what the Commons should have!

To capture the play in a nutshell, it puts British Parliamentary democracy, and all its associated procedures, customs and traditions under a microscope, and examines its strengths and weaknesses in depth, with a huge amount of attention to detail. I found it to be a very enjoyable night out at the theatre.

From a personal point of view, looking at the Labour and the Tory Whips Offices, and the goings-on in each, if I had to choose between the two I would definitely choose to hang out with the Tories - they appeared to be more fun and have more fun! I thoroughly enjoyed Charles Edwards's performance as Tory Whip Jack Weatherill - I really felt that Charles captured the essence of a typical Tory man.

To summarise, I would recommend this play to everyone, but especially to those with an interest in British politics and current affairs, who want an insider's guide into the nuts and bolts of British Parliamentary democracy and how Westminster actually works.

Highly recommended and in cinemas across the UK and worldwide today!
Collapse