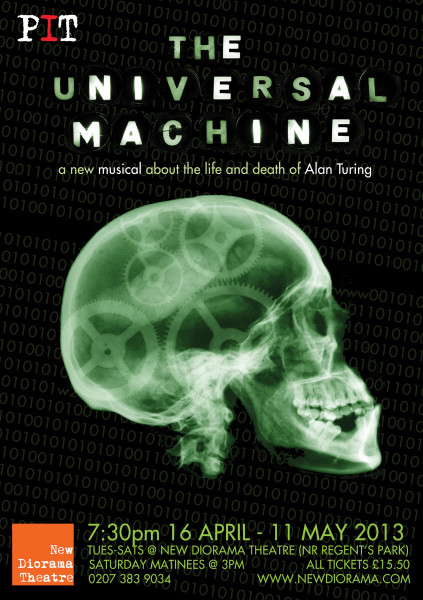 Cut and pasted from the New Diorama Theatre Website:

The Universal Machine: A New Musical about the Life and Death of Alan Turing
16 April to 11 May 2013

It’s 1927. Young Alan Turing is at school developing the work of Einstein and Newton while doing anything to get out of PE.

It’s 1942. Newly engaged Alan Turing has done the impossible and broken the Nazi Naval Enigma Machine and secured the Battle of the Atlantic for the Allied Forces.

It’s 1954. After being arrested, Alan Turing is found dead at his home next to a half-eaten apple laced with cyanide.

The Universal Machine tells Alan Turing’s dense life story from his school days at Sherbourne, his time at the infamous Station X at Bletchley Park during World War Two, and his arrest for homosexuality and tragic death. This complex re-examination of Alan’s life and work tells the story of a man who could make machines think but struggled to make connections with those around him.

For full details and to book tickets, follow the link:
http://newdiorama.com/whats-on/the-universal-machine

I went to see The Universal Machine tonight (Wednesday 8 May) at the New Diorama Theatre and this is my very personal reaction to the piece.

The first section is about Turing's school days at Sherbourne. There is a whole sequence about the school's focus on sports, games and on competition, and how this was not Turing at all. It very effectively conveyed his sense of isolation at the school, until he meets Chris, a fellow student, with whom he shares a love of Maths, a highly intelligent mind, and with whom he forms a very deep friendship and a profound bond. The school shared Turing's mother opinion of her son which was that he was not "normal", whatever normal is. Turing and Chris make plans to go to Cambridge together, but Chris dies of TB before that comes to pass, and Turing is left isolated and alone again. This quite broke my heart, and I really felt Turing's loss of the one person in his life so far who understood him and truly cared about him.

I actually really identified with Turing because I was also absolutely useless at all sports and PE at school, no one would ever pick me to be on their team, and I was also very geeky and introverted, preferring my own company and that of my books, to the company of the other girls in the school.

The action then moves to Bletchley Park and World War 2 and the various attempts to crack the Enigma code. It is here that Turing has the genius idea of designing and building a machine to crack the code, as machines can think so much faster than humans. You get the impression that when Turing was working, and using his brain to its maximum potential, he found real fulfilment in his work. Turing was one of the key people who helped win the War for Britain by cracking the Enigma code, although his personal contribution was secret and therefore never acknowledged or recognised as it should have been. The musical also explored Turing's engagement at this time - his attempt to be "normal" and to lead a "normal" life, one that would be accepted by society.

With the War won, and over, Turing's work is done, his papers and his machines destroyed, and you get the feeling that with his top secret and very important work gone, his life going forwards would be empty and without purpose. Most especially because he could not live the life that he wanted, openly and without shame and persecution - the life of a gay man.

The final section deals with Turing's fall from grace (he admitted a relationship with another man), his prosecution, his chemical castration, and his suicide. For me personally, a man loving another man, and having a sexual relationship with another man, is not "gross indecency" - it is a deep and lasting love, pure and simple. But in those days, a gay relationship was illegal, it was "gross indecency", and Turing undergoes a chemical castration. Unable to live a life true to himself, and with his work gone, there is little point in going on and he commits suicide.

I found it very touching and moving that his mother refused to accept that her son had committed suicide - "he was not weak". She wanted to prove that it had all been an accident; a scientific experiment that had gone wrong.

The focus of Turing's work was on looking at the question "Can machines think?". In this, as in so many other ways, he was of course well ahead of his time. We do indeed now have machines and computers that are intelligent, that can "learn", and that can adapt based on their "learning" ie we now have machines that can "think" (up to a point!).

So Turing's story was about someone who was a genius, who contributed significantly to winning the War for Britain, but who was not normal but different, and the high price that he paid for being different at a time when you had to conform to society's norms.

The whole cast were excellent but I particularly wanted to commend Richard Delaney, playing Alan Turing. He brought Turing to life, as a fully rounded 3-dimensional character, who had integrity. An exceptional performance.

Turing's story hit home for me as I myself am "different" - I am also "not normal". I am British, of Indian heritage, someone who chose to marry for love outside of the Asian community. I am now divorced, and I am not a wife or a mother. I feel I have no worth within my "home" community - the Asian community. I am a middle-aged single woman, living a free life down in London, away from her family and her community, a Public Sector worker, not a doctor, lawyer, accountant etc, with a passion for the Arts not the Sciences. I definitely do NOT conform to the Asian society's norms. I am most definitely an outsider, and I will never be accepted within my community, because of who I am and the life choices that I have made. Very luckily for me, in today's British society, being different is allowed and permitted. It is something that can be celebrated.

I booked to see this because I wanted to learn more about Alan Turing. The production really works and I really enjoyed it. It brings that period in British history to life (I was transported back to Sherbourne, Bletchley Park, and Manchester post-war), and tells Turing's personal story in depth and with integrity and compassion. I found the production deeply moving and very powerful. It told the story of a truly extraordinary and remarkable individual. In summary, this was excellent. An outstanding production. Highly recommended.

It closes this Saturday so if you want to see it I am afraid you will have to get your skates on!

More people should know about Alan Turing, his life, and his contribution.
Collapse