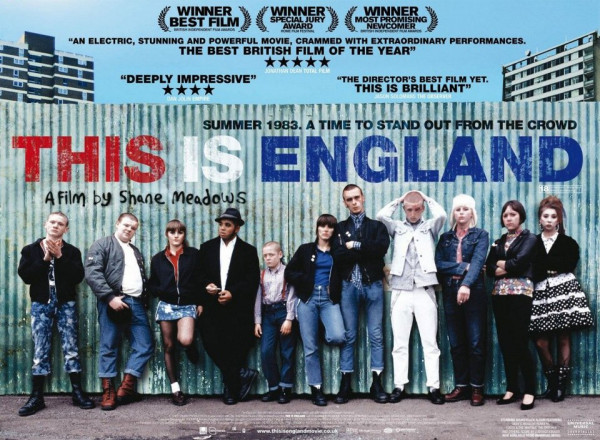 I have never seen the original "This Is England" film before although I have wanted to see it for a long time. I was unsure what I would make of it, or what I would feel about it, given that it is about a gang of English skinheads.

However, the film took me completely by surprise. I genuinely found it to be one of the most powerful, deeply moving and affecting films I have ever seen. I LOVED it. Highly recommended.

As it moved me very deeply, I decided to write about it. The film is set in 1983, in the Thatcher era. The two sequels - set in 86 and 88 - are also set during Thatcher's reign. It therefore seemed particularly pertinent to be writing about it this week.

Growing up in the aftermath of the Falklands War, Shaun is in search of companionship and identity when a gang of friendly skinheads adopt him. When the dangerous Combo enters their lives, the gang is divided and Shaun is exposed to the nastier political elements of the culture and the times. A brilliantly evocative portrait of Thatcher’s Britain, and characteristically funny and poignant, this is Meadows’ finest work to date.

The film has an official website which you can find here:
http://www.thisisenglandmovie.co.uk/

This Is England ’86, C4 2010
Award-winning follow up to This is England, returning to characters as they struggle with life in the floundering industrial towns of the Midlands.

Returning three years after the events of This Is England, ’86 saw Meadows, and collaborator Jack Thorne, taking a magnifying glass to the pasts and inner workings of their characters as they struggle with life in the floundering industrial towns of the Midlands. The results, which were often explosive, gifted us with startlingly honest performances that created unforgettable moments of humour, alongside unimaginable pathos.

Continuing the success of the critically lauded and multi-award-winning This Is England ’86, this three-part mini-series picked up the story during Christmas 1988, 18 months after the tragic events of ’86.

Lol is struggling to juggle parenthood and the emotional burden of past events, and Woody, heartbroken by Lol’s betrayal, is in the midst of a self-imposed exile from the group. 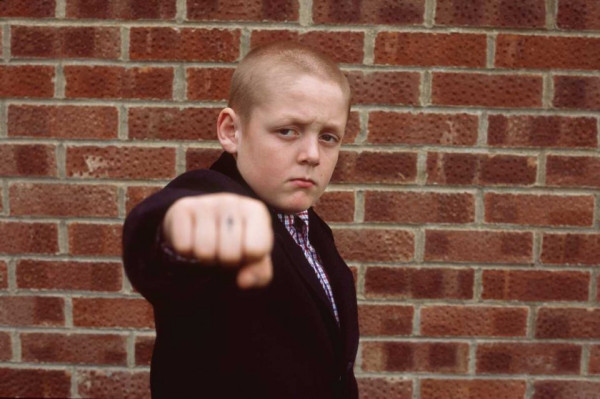 Thomas Turgoose as Shaun Field, This Is England

Topline Summary:
One of the most powerful, deeply moving and affecting films I have ever seen. Highly recommended.

I saw the whole "This Is England" trilogy, and I will write about all three parts of the trilogy, but I wanted to focus on the original "This Is England" film because, for me, this was the strongest piece of the three. It was the film that really moved me, touched me, and deeply affected me.

We are in England, 1983, in Thatcher's era, at the time of the Falklands, and rising unemployment. A time when the rich got richer, and the poor got poorer, and those at the bottom of the ladder truly suffered.

The trilogy is an ensemble piece but this film focuses on Shaun and his story. Shaun is a 12 year old boy, an only child, living with his mum, and his dad has been killed in the Falklands War.

The film opens with Shaun being bullied and picked on at school and getting into a fight. He returns home despondent, feeling very much alone, and missing a father figure in his life.

Shaun chances upon a gang of skinheads, led by the friendly and welcoming Woody. They listen to him, sympathise with him and his problems, and invite him to join their gang. Shaun does so, joins in all their escapades, and has fun. At last, he has found a family and a community; people who care about him and will look out for him. He becomes an integral member of the gang - adopting the look (skinhead) and the uniform. So far so good.

I have to say at this point that I loved some of the comic touches in the film. The scene where Shaun and his mum go to a shoe shop, Shaun with his heart set on a pair of Doc Martins, and his mum with her heart set on some sensible school shoes, is just superb.

The film has a key turning point, which is when the leader of the gang, Combo, returns after a stint in prison. Combo returns and everything changes. The fun-loving happy-go-lucky days of Woody are over, and Combo brings with him menace, violence, nationalism, and racism. The leadership of the gang is contested, and the gang splits. Shaun chooses to stay with Combo not Woody because he wants to make his dad proud. That sentiment quite broke my heart.

Combo now takes over from Woody as being the dominant male influence in Shaun's life.

The tone of the film then completely changes, and there are some shocking scenes, eg a National Front rally, threatening Muslim boys playing football, and stealing from and smashing up the local Pakistani shop.

Shaun's story - that of the young innocent, caught up in this menace and violence, and corrupted by Combo's influence - is truly touching and moved me profoundly.

However, Combo is a complex character, and has light and shade, and depth. He is a fully rounded three-dimensional character, not a pantomine villain. I completely "got" who he was, where he was coming from, why he thought what he did, and why he acted the way he did. I understood who he was and what he was about.

The film climaxes with a very shocking and brutal scene which both explains why Combo is the way he is, and what is missing from his life, and also highlights the violence bottled up inside him, and what can happen when it is unleashed.

The aftermath is also shown, when Shaun realises the horror of what has happened, and he makes a decision as to what his future path will be.

For me, one of the key themes of the piece, was the importance of having friends, having a family, and being part of a community - the importance of having people who cared about you and looked out for you. The real human need to have these things, and how isolating and lonely it can feel when you don't have these things. The real and damaging impact of not having these simple things on your character and on your soul, and the destruction and violence that that loss can cause.

The whole film was incredibly powerful - it was shocking and moving, and it really affected me. The ensemble cast were exceptional, especially the three male leads - Shaun, Woody and Combo. All the characters were three dimensional and fully rounded. And you really got a sense of the people, the community, and that specific moment in time.

The film, its story, and its characters will stay with me for a very long time. That is the strength of the piece.

To touch briefly on the other two films in the trilogy - both of which were screened as mini-series on Channel 4:

This was the one film in the trilogy that I had seen before - on Channel 4 when it was originally screened in 2010. The film picks up the story three years on from the original film, using the same ensemble cast, but the focus shifts from Shaun to Lol. This film is Lol's story - her past and her present.

The film tackles the very difficult subjects of child abuse and rape. As a viewer, it makes for very uncomfortable viewing because you see where the action is headed and you want to stop it, not be a witness.

One of the final scenes, featuring just Lol and her father, is shocking and brutal. It is filmed to maximise the horror and the reality of the crime (twin crimes) that take place.

And this is the film, where Combo comes into his own, comes to Lol's rescue, and takes the rap for a crime he didn't commit. By doing so, he saves Lol.

I saw this in 2010 but because of the story, and the tough and powerful themes it tackles, the film and all of its details had stayed with me, and I remembered it vividly. Again, this is a testament to the power and the strength of the film-making.

For me, this was by far the weakest element in the piece, because it did not have a central theme/storyline/character. However, it picked up the stories of all the characters in the first two films, and I was more than happy to spend extra time in their company, and to see how they were all getting on in their lives.

This Is England 90 has been mooted and is currently in development. I very much look forward to finding out where all the characters are a further two years down the line, and what they are all doing.

To recap, if you have not yet entered the world of "This Is England", I strongly recommend that you do!

I am happy to recommend all three films in the trilogy, but if I had to choose only one to recommend I would go for the original 2006 film. For me, Shaun's story is the most powerful film in the piece.