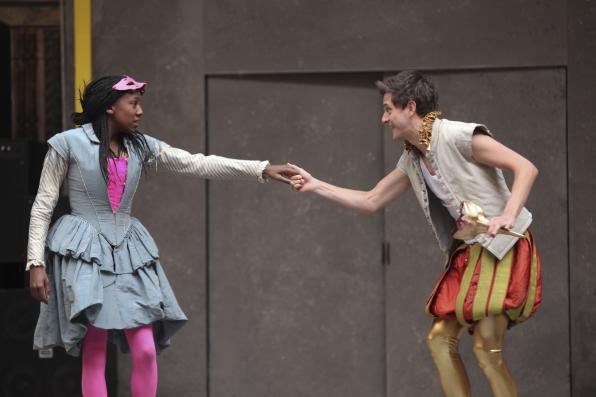 I went to see this on Saturday 30 March, at their final performance at the Globe. The production was absolutely amazing and so I had to write about it!

I went to see this on Saturday 30 March, in what should have been English Springtime but was, in actual fact, bitter Winter. I had opted to be a Groundling because those are actually the best "seats" in the house, but that meant that I was going to be exposed to cold, wind, rain etc and so I wrapped up warm and hoped for the best!

The production totally blew me away - it was AMAZING! I have seen countless productions of Romeo and Juliet over the years, but I would definitely put this production up there as one of the best I have seen.

I LOVED the contemporary setting and the contemporary references eg knife crime, drug dealing. I thought that these really worked and brought Shakespeare's work bang up to date. All the actors were exceptional and it would be wrong of me to single any one of them out - this was ensemble cast playing at its strongest and its best. The verse-speaking was extraordinary - it really brought Shakespeare's language to life - it was clear, it was accessible, and it was beautiful. The amount of energy that the actors brought to the stage was incredible - they really rocked the House! The fight sequences were very good - very believable, very gritty, very raw and very authentic; and with knife crime on the rise in urban centres like London, this was an aspect of the production that young people could really relate to. The death scene was done brilliantly - it was shocking, especially because whilst Romeo takes poison to kill himself, Juliet, ever the warrior, actually stabs herself with a knife.

Finally, around half-way through the performance, it started snowing, at first just a bit, but then very heavily. It is a real credit to the performers and the production that no one left; we all stayed on. To be honest, I was so gripped by the actors and the production that there was no way I was going anywhere - even though I know how it all ends! Luckily the snow eased off and stopped after about 10 mins so it was really no problem at all.

Finally, I wanted to say a BIG THANK YOU to Deutsche Bank for being the corporate sponsors for this and for supporting the production. It would be very difficult for the Globe to do this work without the backing of a corporate sponsor, and it shows that businesses - even banks! - can do good things and be socially responsible.

Specially created for schools, Playing Shakespeare with Deutsche Bank features CPDs, workshops, web resources and a stunning production on the Globe stage. The project is designed to promote active and practical approaches to the teaching of Shakespeare at Key Stage 3 and 4.

For the seventh year, Deutsche Bank funded a special production for young people at Shakespeare’s Globe, Romeo and Juliet.

In preparation for their visit to the Globe, students had access to the Playing Shakespeare with Deutsche Bank web resource, providing them with insights into creating a production for the Globe Stage and featuring interviews with actors and key company members.

Playing Shakespeare with Deutsche Bank offers a collection of Award Winng free online resources with a variety of creative ways to engage with language, character, themes and performance. Explore the microsite from the Romeo and Juliet production here:
http://2013.playingshakespeare.org/

The microsite is just EXCELLENT - do check it out and take your time exploring!
Collapse