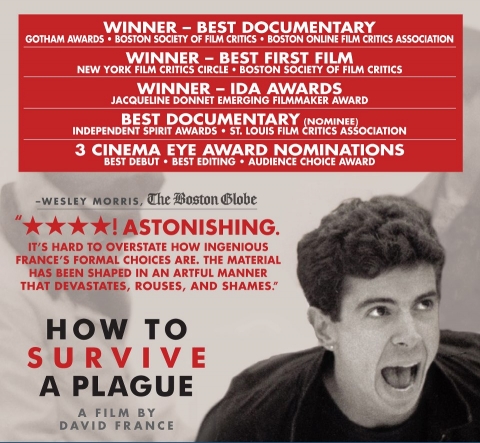 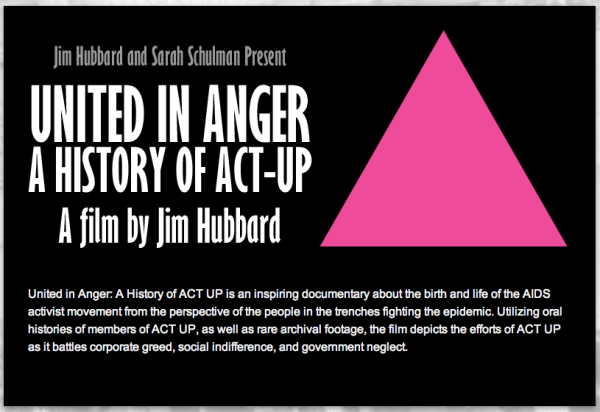 I had the privilege of seeing both of these films today (Monday 18 March) at the BFI as part of the London Lesbian and Gay Film Festival. As they both cover HIV and AIDS in the US and the activist-led campaign group ACT UP, I decided to write them up together. I saw them very much as companion pieces.

How to Survive a Plague, USA 2012
A vital, Oscar-nominated chronicle of how a community united to fight for their lives in the face of government resistance to seek new cures for the AIDS epidemic.

Greenwich Village, the mid-1980s. With the city’s formerly thriving gay population hit hard by the AIDS epidemic, the community became increasing despondent by the lack of treatments available and the apparent resistance from both the government and drug manufacturers to seek new cures.

With time running out, hundreds of activists took to the streets, demanding research into new drug development. In the face of such crippling adversity, a community was forced to become its own doctors, its own pharmacists and ultimately its own saviours.

Largely comprised of astonishing archive footage of political rallies, activist workshops and interviews with inspirational activists, How to Survive a Plague is a deserving nominee for Best Documentary at this year’s Academy Awards®.

A vital and rousing chronicle of how a community united to fight for their lives, demanding change and the respect they deserved.

United in Anger: A History of ACT UP, USA 2012
An inspiring insiders' account of the radical protest group, the Aids Coalition to Unleash Power, generally known as ACT-UP.

Out of the darkest days of the Aids epidemic a vibrant and urgent protest movement was created. The group started in New York and was a powerful and dynamic force orchestrating some extraordinary protests which captured imaginations and went on to save lives. Health education and medical research is difficult to make sexy and compelling but this coalition of artists and activists managed it. And they recorded everything they did on video.

Jim Hubbard brilliantly condenses a huge amount of material into a coherent and balanced account of these activists’ stories. Lesbians and gay men took joint action and had great fun doing it. The die-in at New York cathedral was one high point of the campaign.

This is my reaction to the two films:

- It was a real privilege to see both of these films - I was inspired and uplifted by both
- The films were deeply moving and very powerful
- The films are as much about activism and campaigning as they are about HIV and AIDS. They document a very important activist-led campaign - important because it was successful and effective. I was hugely appreciative that both these filmmakers were so passionate about this subject that they had painstakingly put together these films and ensured that this piece of activism was properly documented and preserved for posterity
- I learnt how much of a difference it can make when activists are fighting for their lives - this issue was a matter of life or death to these activists - either they got access to the drugs and to decent healthcare - or they died
- I learnt how much more effective an organisation is when it is a true collective, acting on democratic lines. It is very important that everyone is allowed to speak and have a say and that decisions are taken as a collective
- In the United in Anger film, I was shocked to learn that the original definition of HIV and AIDS specifically excluded women and so women were unable to access benefits or healthcare
- Together you are stronger. The movement was strongest when it worked in partnership with women's groups, and when it was open to BME people and poor people
- I loved the sense of fellowship, friendship and community that was created amongst the activists - they made lifelong friends, they were a strong support network for eachother, the movement was something that was fun and rewarding, and was something you wanted to be a part of
- The films showed that activists and activism CAN effect change - direct action can, and does, work!
- The two most powerful direct actions for me, depicted in both films, were:
a) the Stop the Church protest staged within St Patrick's Cathedral in New York, including a mass die-in, because the Catholic Cardinal had spoken out against the use of condoms and therefore would indirectly cause the death of many many many people,
b) bringing the ashes and bone chips of loved ones killed by AIDS and dumping them on the White House lawn as it was the President's inaction in response to the HIV and AIDS epidemic that had directly resulted in their deaths
- I was struck by just how many good people were lost in the late 80s and early 90s; it is moving and upsetting to learn that so many of the inspirational activists captured in these documentaries, fighting so hard for their rights and for the right to live, lost their lives in the early 90s to AIDS
- Finally, I very much enjoyed both films as they both taught me a lot about what makes for an effective campaign, an effective direct action, what tools to use, how to go about it, etc - ie I learnt a lot about campaigning and effective political activism from both films.

This Slogan spoke to my heart:

These Chants spoke to my heart:

ACT UP
Fight Back
Fight AIDS

Stand Up
Speak Out
Fight Back

In summary, what I would say is that both films are excellent and exceptional and I would VERY HIGHLY recommend both films to everyone because they tell a very powerful and moving story of how when people work together collectively you can take on giants like the pharmaceuticals companies, and even the President and the White House, and effect change and win.

Further details on "How to Survive a Plague": 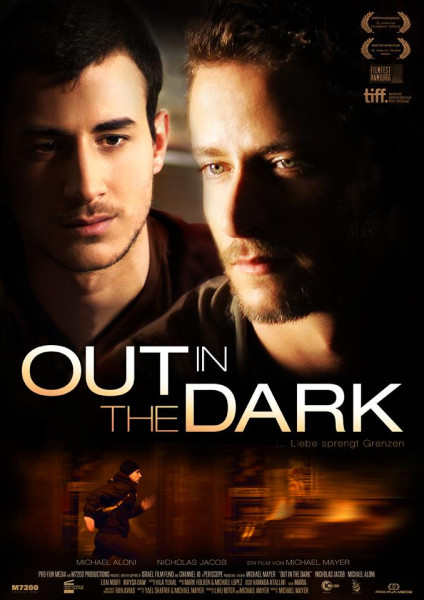 Out in the Dark (Alata), Israel-USA 2012
A powerful and sensitive love story from Israel, set against the backdrop of political conflict.

When Nimr, a Palestinian graduate student, meets Israeli lawyer Roy in a nightclub, their attraction to each other is immediate. Despite some initial hesitation, Nimr calls Roy a few days later and the two begin dating, quickly falling in love and looking towards a future together.

Forced to confront the realities of a Palestinian society that will not accept his sexuality, and an Israeli society that rejects his nationality, Nimr finds solace in Roy’s arms, and dreams of a day when he can continue his studies in the United States. Keeping his sexuality a secret from his conservative family, the difficulty of Nimr’s situation deepens with his brother’s increasingly violent activism as part of an extremist group.

As personal and political tensions grow, Nimr realises he must make a choice between his love for Roy and his dreams of a life abroad.

Tales of forbidden passion are frequently told in gay cinema, but here director Michael Mayer approaches his subject with striking originality and a compelling immediacy, deftly weaving the backdrop of the Israel-Palestine conflict into his sensitive love story. At heart a hugely affecting relationship drama, propelled by two heartfelt performances from Nicholas Jacob and Michael Aloni as Nimr and Roy, Out in the Dark is guaranteed to get pulses racing with both its taut thrills and sweeping romance.

I saw this today - on Tuesday 19 March - at the BFI as part of the London Lesbian and Gay Film Festival.

Although this is a gay love story, and I saw it as part of the London Lesbian and Gay Film Festival, this film is for everyone. It is a profoundly moving love story, of the love that dare not speak its name, between an Israeli and a Palestinian, who meet in a Tel Aviv nightclub, and the trials and tribulations that then ensue.

I was totally blown away by this film - it gripped me by the scruff of the neck right from the start and it did not let go! I thought it was simply superb.

It is primarily a love story, so its focus is very much personal, but it is set against the political backdrop of the Palestine/Israel Middle East conflict.

The political dimension is very much covered eg permits required by Palestinians to access Israel, the Palestinian fight back / "terrorism", LGBT Palestinians having to flee their homeland if they are "outed", their subsequent fight for asylum, what happens to "Israeli collaborators", the work of the Israeli Security Services etc. However, the focus is always on the personal - the two leads and their families, and their love story - so the politics is accessible and not too "heavy".

The love story is very moving and both lead actors are amazing. The instant spark and attraction, and the growing and deepening love between the two men, is 100% believable. You "buy" the fact that both men would pay a heavy price to be together.

The Palestinian attitude to LGBT people shocked and saddened me. The film has not yet been shown in Palestine, presumably because of the "controversial" content (ie it features a gay Palestinian man). I find it deeply depressing when one human being can't relate to another human being on the grounds of ethnicity, nationality, sexuality, gender, disability etc.

The ending is left deliberately open, so you will ultimately decide the fate of the doomed (?) lovers.

The film has a UK distributor and will hit UK cinemas in June. I am getting in early and saying that you will DEFINITELY want to see this film - it is highly highly highly recommended by me!

Finally, this was the Accenture Gala and I wanted to say a big THANK YOU to Accenture for the free chocolate (Green and Black's no less!) and free water that they gave to all their audience members - it was very much valued and appreciated - a real treat! :)
Collapse