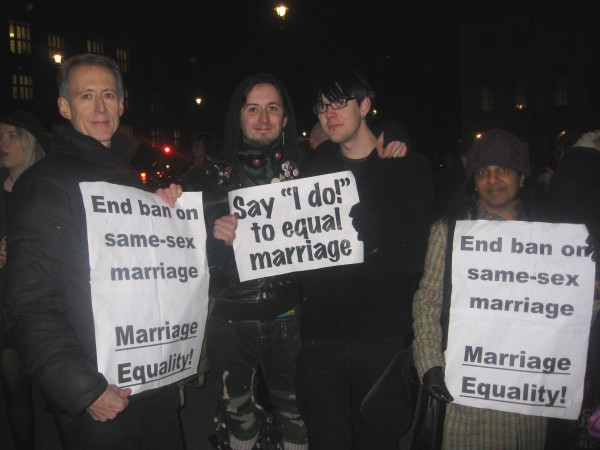 I have written a piece outlining why I am a passionate advocate of Equal Marriage and Operation Black Vote (OBV) have run it on their website. It can be found here:
http://www.obv.org.uk/news-blogs/equal-marriage-vote-victory-love-and-equality

The text (unedited version) is reproduced below:

Equal Marriage Vote: A Victory for Love and Equality

Tuesday 5 February was a truly historic day in Parliament as the House of Commons voted overwhelmingly in favour of Equal Marriage after a full day’s debate – 400 MPs voted for the Marriage (Same Sex Couples) Bill and 175 against.

I am writing this piece because I know that Equal Marriage (Same Sex Marriage) is a contentious issue in BME communities, especially amongst people of faith.

I am heterosexual (straight) and Christian (Church of England). I have been a longtime supporter of Lesbian, Gay, Bisexual and Transgender (LGBT) rights and I am a passionate advocate of Equal Marriage. For me, Equal Marriage is about the principle of equality and having equal rights under the law.

Most BME people have an understanding of prejudice because they usually have direct personal experience of being discriminated against because of their ethnicity. Another group of people who understand prejudice and discrimination is the LGBT community. Until recently, many inequalities remained enshrined in law and it is only in the last 13 years that most homophobic laws have been repealed, including an end to the criminalisation of homosexuality and the abolition of consenting, victimless anti-gay offences.

At present, LGBT people cannot get married, they can only have a Civil Partnership. A Civil Partnership is not the same. Aside of some key differences (eg pension rights), it is an entirely separate system – and separate is not equal. Surely, in a democratic society, everyone should be equal under the law?

Banning LGBT people from marriage makes them second class citizens and devalues their love. Many LGBT people are in loving lasting long-term relationships and want to get married. For them, a Civil Partnership is second-best and not good enough.

Whilst the debate took place inside the Commons, supporters of Equal Marriage (including me!) held a Rally outside Parliament for love and equality, and to make a visible presence for equal rights against the vociferous homophobic minority.

The Commons vote in support of Equal Marriage was a historic victory for love and equality, bringing joy and hope to tens of thousands of LGBT couples, because (when the Bill becomes law) it will give them the opportunity to get married just like everyone else.

Although the vote has been won in the Commons, the fight for Equal Marriage goes on. The Bill will now go to the House of Lords where it will face stiff opposition.

I would ask everyone who genuinely cares about equal rights and equality to lobby a member(s) of the House of Lords (by writing or emailing) to encourage them to stand up for the principle of equality and to support the Marriage (Same Sex Couples) Bill.