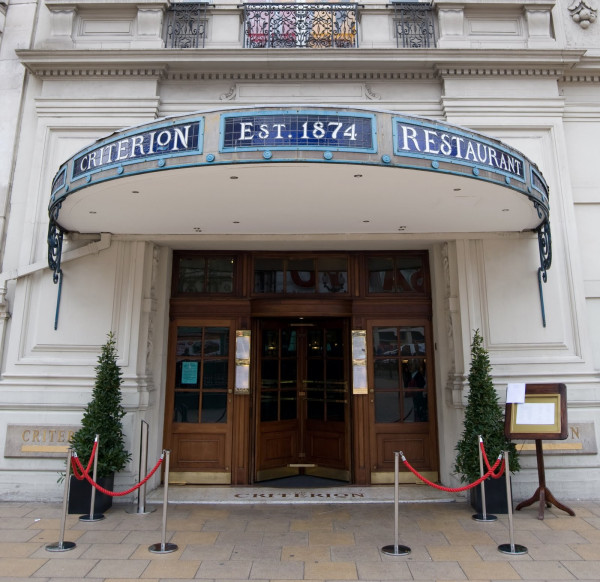 Today, as part of The Sherlock Holmes Society of London's January Weekend, I went to the Criterion Restaurant for the unveiling of a new plaque. The new plaque was commissioned and donated by the Japan Sherlock Holmes Club. 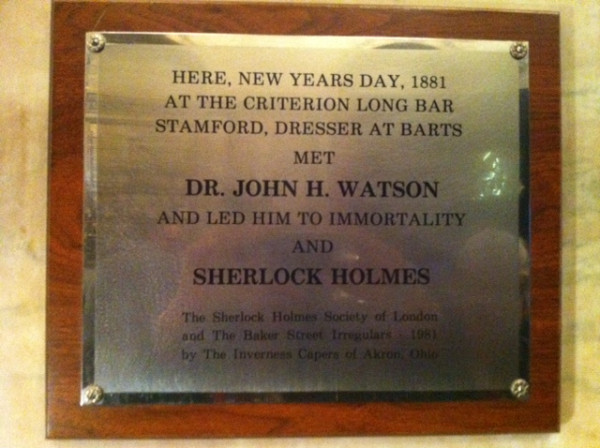 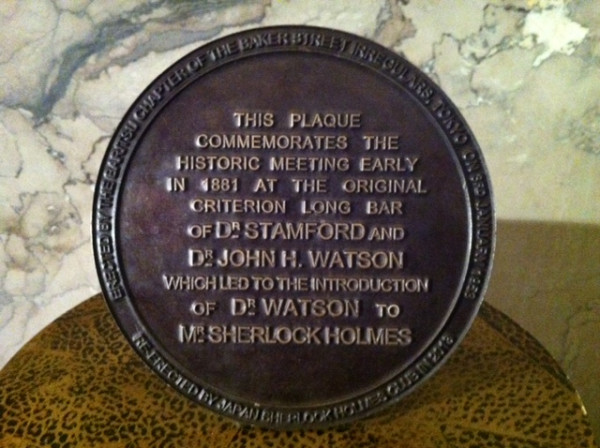 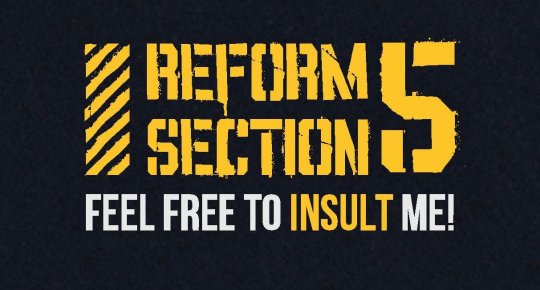 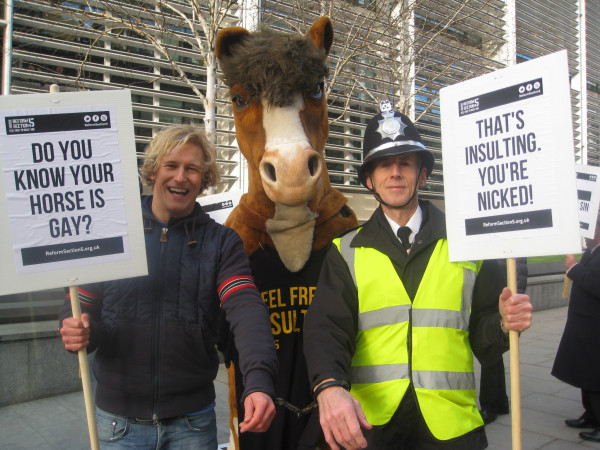 You will recall that on Monday 10 December 2012 the Reform Section 5 Campaign staged a protest. Peter Tatchell (dressed as a police officer), a student, and a pantomine horse gathered outside the Home Office HQ at 2 Marsham Street, London to highlight the case of an Oxford student who was arrested in 2005 under Section 5 of the Public Order Act for joking that a police officer's horse was gay.

This is the video of our protest (featuring my purple woolly hat and my hand - FINALLY my 5 seconds of celebrity!):

Why did we do this?

The Reform Section 5 Campaign was about ending the criminalisation of mere insults.

“The insults clause of Section 5 menaces free speech. It has been misused too many times to suppress freedom of expression. Reform of the law is supported by the present and previous Director of Public Prosecutions, the former Lord Chancellor Lord Mackay, the Independent Police Complaints Commission, Liberty, Justice and the Equality and Human Rights Commission, as well as the Reform Section 5 campaign. The Association of Chief Police Officers has no objection to reform,” said Peter Tatchell, Director of the human rights organisation, the Peter Tatchell Foundation, which is backing the repeal of the insults clause.

“The criminalisation of insults is far too subjective and constitutes a dangerously low prosecution threshold. Anyone who values free speech and robust debate should welcome its removal from Section 5.

“The Section 5 ban on insults has been abused to variously arrest people protesting peacefully against abortion and campaigning for gay equality and animal welfare. Other victims include Christian street preachers and critics of Scientology.

“Freedom of expression is one of the most important of all human rights. It should be only restricted in extreme circumstances. The open exchange of ideas - including unpalatable, even offensive ones - is the hallmark of a free and democratic society,” he said.

Section 5 of the Public Order Act 1986 criminalises “threatening, abusive or insulting words or behaviour... within the hearing or sight of a person likely to be caused harassment, alarm or distress thereby.”

“There is no requirement to prove that anyone has been harassed, alarmed or distressed. The mere likelihood is sufficient to secure a conviction. Moreover, an offence is committed regardless of the offender’s intention. Innocently intended words can result in a criminal record. The police and the courts can decide if a person might feel insulted. This is a threat to free speech.

“What constitutes a criminal insult is completely elastic and subjective, which is why people have been arrested for criticising homosexuality and Islamist extremists.

"This legislation has been on the statue books 26 years. It was initially introduced to tackle football hooliganism and public disorder. The legislation is now being misused to criminalise people for trivial comments, including those who were simply expressing their views or beliefs.

“The Reform Section 5 campaign includes all shades of opinion, from the Christian Institute to the National Secular Society, Freedom Association, Big Brother Watch and the Peter Tatchell Foundation. On this issue, we’ve sunk our differences and are working together to defend free speech and the right to protest," said Mr Tatchell.

On Monday 14 January the Home Secretary, Theresa May, told the House of Commons that the Government would accept the Lords amendment to remove the word “insulting” from Section 5 of the Public Order Act 1986.

Theresa May told the House that the Government respected the view of the House of Lords and said comments by the Director of Public Prosecutions, Keir Starmer, meant the Government was “not minded to challenge the amendment” made in the Lords.

She said: “Looking at past cases the Director of Public Prosecutions could not identify any where the behaviour leading to a conviction could not be described as abusive as well as insulting. He has stated that the word insulting could safely be removed without the risk of undermining the ability of the CPS to bring prosecutions.”

This vital free speech reform will not come into effect for a period of months as the Crime and Courts Bill must complete its passage through Parliament.

This represents a victory for free speech in the United Kingdom.

You can see and read the coverage of the Reform Section 5 Campaign Victory here:
http://reformsection5.org.uk/2013/01/coverage-of-victory-to-reform-section-5/

You can read all about the Reform Section 5 Campaign on its website here:
http://reformsection5.org.uk/ 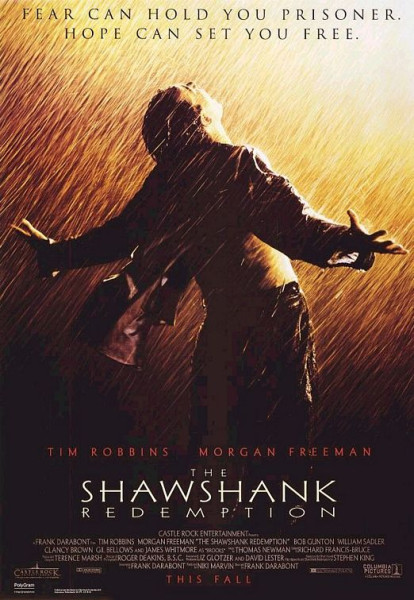 I went to Future Cinema's The Shawshank Redemption on Friday 18 January. I knew what film I was going to see in advance which was why it was presented by Future Cinema not Secret Cinema (with Secret Cinema the film that you have booked to see remains a mystery until you see it!). This had been a Secret Cinema at the tail end of 2012, and it had proved to be so popular that they had turned it into a Future Cinema presentation at the start of 2013.

As per usual, the experience immersed you in the world of the film that you were about to see. You turned up at Court with your Summons, were promptly sentenced by the Judge, and then bundled into a blacked out bus/van which transported you to your new home, prison. You were stripped of your clothes and possessions, given a prison uniform, and locked up in a cell, with Bibles on the beds for company. Later on you got to roam the prison, and get into all kinds of adventures and scraps, which were all related to the film in some way eg laundry room, library cards etc. The attention to detail was phenomenal, the actors were all spot-on, and it was a totally immersive experience.

Eventually, when we got to watch the film after all the build-up, I was reminded of just how powerful and moving a film The Shawshank Redemption actually is (I had not seen the film for many years). It is a film where, ultimately, good wins over evil, and justice is done, and it speaks very powerfully about the strength and the resilience of the human spirit, and how the human spirit can and will overcome any adversity.

This Future Cinema production is very expensive but I am still recommending it because it is unique, exciting, innovative, and fun.

There is a great write-up of the Secret Cinema Shawshank experience in the Telegraph here:
http://www.telegraph.co.uk/culture/film/filmreviews/9718783/Review-Secret-Cinema-presents-The-Shawshank-Redemption.html

This is the trailer which gives you a very good idea of what you will get to experience: