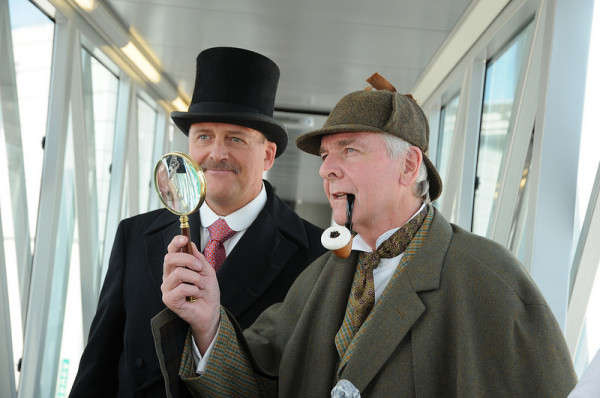 The photo above is taken from The Sherlock Holmes Society of London's Swiss Pilgrimage in 2012. If you are interested, the full photoset can be found here:
http://www.flickr.com/photos/switzerland_tourism/sets/72157631180752068/

This weekend (Saturday 19 and Sunday 20 January) is The Sherlock Holmes Society of London's annual January weekend, including its Annual Dinner at the Houses of Parliament and a morning after lunch down the pub! I am going and I am really looking forward to it! :)

Cut and pasted from The Sherlock Holmes Society of London Website:

The Society's 60th Annual Dinner will be held in the Members' Dining Room at the House of Commons, London. The title assigned to this year's function is THE STRANGER’S ROOM REPAST.

For our 2013 Annual Dinner the Society is delighted to welcome novelist, critic and broadcaster Kim Newman as our Guest of Honour.

He was born in Brixton, the family later moving to Aller, a village in Somerset where his parents set up Aller Pottery. He read English at the University of Sussex, graduating in 1980. He became interested in monsters, movies, literature and comics at school and worked on theatre and with various music or comedy groups, acting with the Bridgwater Youth Theatre. After university, he moved to London, and a number of his plays and musicals were staged at the Bridgwater Arts Centre in the early 1980s, including My One Little Murder Can’t Do Any Harm, which introduced the characters of Edwin Winthrop and Catriona Kaye, who still appear in his fiction.

He began working regularly as a film critic in 1982, writing for City Limits, the London listings magazine, and Venue, the Bristol equivalent, among others. A year later Proteus Books took up his Nightmare Movies on the basis of an outline and a sample chapter. He sold his first short story, ‘Dreamers’, to Interzone. He began broadcasting in the mid-1980s, reviewing films, books and plays on Radio 4’s Kaleidoscope. He worked in television from 1986, briefly as a film reviewer on ITV’s Night Network, and then on Channel 4’s breakfast show, The Channel 4 Daily. He has written documentaries and appeared on many documentaries, arts and entertainment programmes, including a number of ‘100 Best’ programmes. He works regularly for Empire and Sight & Sound and contributes audio commentaries and liner notes to DVDs.

Kim has won a number of awards, among them the 1989 Bram Stoker Award (presented by the Horror Writers of America) for “Best Non Fiction 1989? for Horror: 100 Best Books and the Children of the Night Award (presented by the Dracula Society) for “Best Novel 1992?, the 1994 Fiction Award of the Lord Ruthven Assembly, the 1994 International Horror Critics’ Guild Award for Best Novel and the 1999 French Prix Ozone for Foreign Fantastic Novel, all for Anno Dracula.

The Sherlock Holmes Society of London’s Morning After will be held at The Centre Page, 29-33 Knightrider Street London EC4V 5BH.

The original building of 1665 was The Horn Coffee House in Doctors Commons, 10 Godliman Street, off Carter Lane on the south side of St Paul’s Churchyard. The Horn Tavern, as the late 18th century pub was known, is best known as being mentioned in Charles Dickens’ The Pickwick Papers - Mr Pickwick sent his friends to the tavern to fetch a bottle of wine for his supper, he being incarcerated in the Fleet Prison at the time. It was fairly recently restored and renamed The Centre Page. (While Holmes did visit Doctors’ Commons in “The Speckled Band”, it was sadly to Somerset House that he went, the building housing it here having been demolished in 1867).

If you are going along to either event, see you there!
Collapse