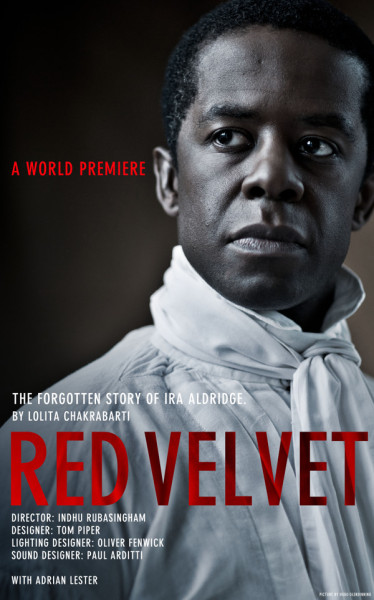 Tuesday 15 January was the date of the Critics' Circle Theatre Awards. These awards are voted for by a panel of professional theatre critics, who decide the winners based on their personal preferences.

Cut and pasted from the Telegraph:

Adrian Lester and Lolita Chakrabarti (husband and wife) both won awards for the play Red Velvet at this year's Critics' Circle Theatre Awards.

Adrian Lester won the Best Actor award for his performance in the new play Red Velvet, which was performed at the Tricycle last year. The play, which charts the story of Ira Aldridge – Britain's first black actor of note, who worked in the 19th century – was written by Lester's wife Lolita Chakrabarti, who has also been awarded Most Promising Playwright.

Although Russell Beale did not win Best Actor, he was given the award for Best Shakespearean Performance in Timon of Athens, which played at the National Theatre.

Hattie Morahan was awarded Best Actress in A Doll's House at the Young Vic.

The Young Vic Theatre had a hand in several of the awards given today, including Best Director – Benedict Andrews for Three Sisters at the theatre – and Best Designer – Miriam Buether for Wild Swans, also at the Young Vic.

Lucy Prebble's new play The Effect, which is currently playing at the National Theatre and starring Billie Piper, was given the award for Best New Play.

The John and Wendy Trewin Award for Best Shakespearean Performance: Simon Russell Beale in Timon of Athens, Olivier Theatre at the National, London

The Jack Tinker Award for Most Promising Newcomer (other than a playwright): Denise Gough for Desire Under the Elms, Lyric Hammersmith, London

SPECIAL CONGRATULATIONS to the following - I saw these productions/performances and LOVED them!