Photo credit: http://www.dailymail.co.uk/debate/article-1280016/Sir-Humphrey-alive-Epping.html
Yes, Minister: Sir Humphrey Appleby (Nigel Hawthorne in the centre), along with Bernard Wooley (Derek Fowlds on the left), would use verbose language to bamboozle minister James Hacker (Paul Eddington on the right) in the BBC comedy.

As "Yes Prime Minister" is currently back on stage, and has also returned to the small screen, I decided to re-run my feature in praise of Sir Humphrey Appleby. So here it is again, for your delectation and delight ...

This post is dedicated to all my past and present colleagues in the Civil Service, in particular the Senior Civil Servants, the Directors, the Director Generals and the Permanent Secretaries.

A recent question posed over on GLEE @ PwC, the inclusive business network for gays, lesbians and everyone else, was the following:
As a child, what was your first dream career or job?
For me personally, it was an easy answer. I wanted to be Sir Humphrey Appleby - and yes, I was a very sad, very geeky and slightly weird child!

I grew up watching Yes, Minister and Yes, Prime Minister, with my family and we all thoroughly enjoyed the weekly machinations of Sir Humphrey Appleby, as he plotted and manoeuvred, so that by the end of each half hour episode he had completely managed to pull the wool over Jim Hacker's eyes and got his own way. For me, Sir Humphrey was a genius, a legend, a cultural icon. I therefore decided at a very early age that my lifelong ambition would be to be Sir Humphrey Appleby, and head up the Home Civil Service, walking the corridors of power at Westminster.

The obvious question is ... why did I want to be Sir Humphrey? I am going to give an honest answer.

I wanted power; I wanted to run the country. I LOVED Sir Humphrey because of his Machiavellian machinations, his ability to manipulate people, his ability to deceive and dissemble, and his power games. I LOVED his use (or, to be more accurate, his abuse!) of the English language; the way he could concoct the most convoluted sentences, where by the time he reached the end of the sentence you had forgotten the beginning and the point he was making; his use of the longest and most complex words in the English dictionary; and his general smarminess! He also seemed to have an amazing lifestyle, swanning around the corridors of power in Westminster, hanging out and drinking at all the best private clubs in London, and going to all the best parties and events. To cut a long story short, I was DESPERATE to be Sir Humphrey!

Unfortunately, this particular dream went up in flames in Summer 2011 during the London Riots! However, many of my closest friends still work in the Civil Service, some of them at quite exalted levels, and so I console myself with the thought that one of them, one day, will make it to Cabinet Secretary or Permanent Secretary ie Sir Humphrey, and then they can live this lifestyle, and I can achieve my lifelong career ambition vicariously through them!

Sir Humphrey Appleby, GCB, KBE, MVO, MA (Oxon), is a fictional character from the British television series Yes, Minister and Yes, Prime Minister. He was played by Sir Nigel Hawthorne. In Yes Minister, he is the Permanent Secretary for the Department of Administrative Affairs (a fictional department of the British government). In the last episode of Yes, Minister, "Party Games", he becomes Cabinet Secretary, the position he retains during Yes, Prime Minister.

Sir Humphrey is a master of obfuscation and manipulation, often making long-winded statements such as:
"In view of the somewhat nebulous and inexplicit nature of your remit, and the arguably marginal and peripheral nature of your influence within the central deliberations and decisions within the political process, there could be a case for restructuring their action priorities in such a way as to eliminate your liquidation from their immediate agenda."
He is committed to maintaining the status quo for the country in general and for the Civil Service in particular, and will stop at nothing to do so — whether that means baffling his opponents with technical jargon, strategically appointing allies to supposedly impartial boards, or setting up an interdepartmental committee to smother his Minister's proposals in red tape.

Throughout the series, he serves as Permanent Secretary under the ministry of Jim Hacker at the Department of Administrative Affairs; he is appointed Cabinet Secretary shortly before Hacker's elevation to the role of Prime Minister.

Sir Humphrey represents, in many ways, the perfect technocrat. He is pompous, arrogant, elitist and regards his less-well-educated minister with some contempt. He frequently uses both his mastery of the English language and even his superb grasp of Latin and Greek grammar to perplex his political master and to obscure relevant issues under discussion.

He genuinely believes that the Civil Service knows what the average person needs and is the most qualified body to run the country, the joke being that not only is Sir Humphrey, as a high-ranking Oxford-educated Civil Servant, quite out of touch with the average person but also that the Civil Service identifies whatever is 'best for Britain' as being 'best for the Civil Service'. Jim Hacker, on the other hand, tends to regard what is best for Britain as being whatever is best for his political party or his own chances of re-election. As a result, Sir Humphrey and Hacker often clash.

Sir Humphrey enjoys the finer things in life, and is regularly seen drinking sherry and dining at fine establishments, often with his fellow civil servant Sir Arnold Robinson, who was Cabinet Secretary throughout Yes Minister. Sir Humphrey is also on the board of governors of the National Theatre and attends many of the gala nights of the Royal Opera House. His interests also extend to cricket, art and theatre.

Let us give it up for Sir Humphrey! Here are the links to the Radio Times features on the new incarnation of Yes Prime Minister:

After a 24 year hiatus, Jim Hacker is back in power:
http://www.radiotimes.com/episode/tn4kj/yes-prime-minister--series-1---1-crisis-at-the-summit

How does the new Yes, Prime Minister measure up?:
http://www.radiotimes.com/news/2013-01-15/how-does-the-new-yes-prime-minister-measure-up

The Stage version has just finished its run in the West End and will shortly embark on a nationwide tour. All the details can be found on the official website here:
http://www.yesprimeminister.co.uk/ 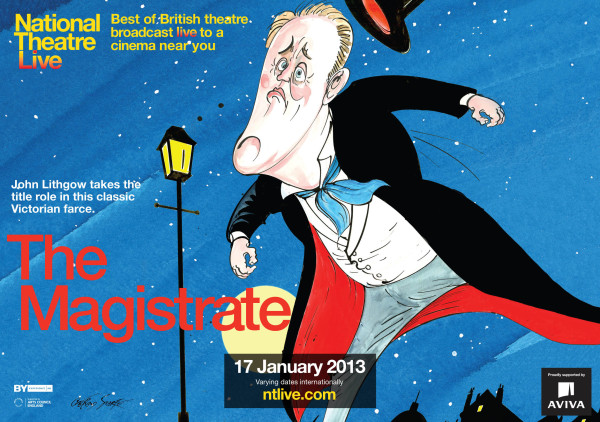 The Magistrate gets its NT Live today, so it will be broadcast live from the National Theatre into cinemas across the UK and around the world.

The Magistrate
by Arthur Wing Pinero

With his louche air and a developed taste for smoking, gambling, port and women, it’s hard to believe Cis Farringdon is only fourteen. And that’s because he isn’t. Agatha his mother lopped five years from her true age and his when she married the amiable Posket.

The imminent arrival of Cis’ godfather sends Agatha incognito to the Hôtel des Princes to warn him of her deception. But it’s also where her son has cajoled his otherwise staid stepfather into joining him for a binge.

High-spirited carousing leads to a police raid and a night of outrageous mishap as the trapped guests make desperate attempts to conceal themselves from the law and from each other. Indignities escalate at court the next day where Posket, the police magistrate, must preside.

John Lithgow takes the title role in this fast, furious, brilliantly plotted farce set in Victorian London; he is joined by Nancy Carroll.

The NT Live website, where you can find out more information about the production and also find your nearest cinema showing NT Live, is here:
http://microsites.nationaltheatre.org.uk/45462/home/national-theatre-live-homepage.html

Comedy and, more than that, farce is not really my cup of tea and is definitely not my favourite genre by a long long way. However, One Man, Two Guvnors completely took me by surprise and it proved to be one of my favourite shows. It is a show that I still recommend to visitors to London who are looking for a good old-fashioned fun night out. I therefore went along to see The Magistrate on Saturday 22 December with a completely open mind.

To start with the positive. The set design on this production is, quite simply, outstanding - it is breath-taking. The costumes are amazing. Joshua McGuire plays Cis Farringdon and he was just excellent as always (I first saw him live in Posh and he was fab in that too). Joshua definitely deserves a special mention for his performance which is bang on the money.

However, for me, having seen the production I just left the theatre feeling very empty and disappointed. It is a farce, a romp, but there was no meat for the brain, nothing that would make you stop and think. It had no substance. I think the National Theatre is, and should be, so much better than that.

For that reason, one viewing was more than enough and I will be giving this NT Live a miss (the first one I will have missed in ages). Sorry National Theatre.
Collapse