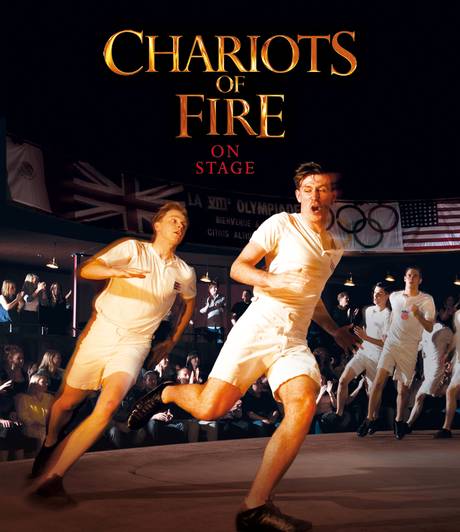 I am re-running this feature because Chariots of Fire was, in my humble opinion, one of the best things I saw on the stage last year. It closes this Saturday so this is your last chance to see it!

Cut and pasted from the Chariots of Fire Website:

FOR COUNTRY, FOR HONOUR, FOREVER

Adapted from the legendary Oscar-winning movie, this spectacular and ingenious retelling of Eric Liddell's and Harold Abrahams' quest to become the fastest men on earth is an electrifying and immensely moving tale of two men's rivalry, and their unwavering determination to conquer the world in the face of prejudice, immovable beliefs and overwhelming odds.

Adapted for the stage by award-winning writer Mike Bartlett and featuring the original, hugely iconic Vangelis score and a magnificent ensemble cast under the direction of Edward Hall, Chariots of Fire brings alive the incredible true story of two British athletes whose honour, sacrifice and courage brought them glory and immortality on the greatest sporting stage of all.

Follow the link below for the full production details and to book tickets:
http://www.chariotsoffireonstage.co.uk/ "The Theatrical Event of 2012". I fully agree with this statement and I am backing the production 100%.

I have now seen it four times and it totally and utterly blows me away. I think it is one of the most amazing things I have ever seen at the theatre. It makes my heart race and stop dead at the same time! In a nutshell, mind-blowing and amazing. Truly exceptional.

I originally booked to see this purely because London is hosting the Olympics this year. I am not going to a single London sporting Olympics event (I will be watching at home on my telly, like most people, or at All Souls on the big screen). But I booked to see this as this was my way of paying tribute to the fact that London is hosting the Olympics this year. It is the closest I am getting to the London Olympics! If you are not able to get the Olympic tickets that you want, I highly recommend coming to see this as an alternative; being a theatre not a sports fan, I would argue that this is way better!

The first thing I wanted to talk about was the staging. I can honestly say that I think the staging is quite simply the best I have ever seen. Over the course of the show, the stage becomes many things, including the closed and closeted world of Cambridge, and all the settings are 100% believable and convincing. The staging totally transported me to that time, that place and that world, be that Cambridge, Scotland or Paris.

There is a great prologue to the piece with the actors all on stage, warming up. Stretching, preparing, jogging, running around the track, all set to music. I loved that!

Which brings me onto the second thing that I wanted to talk about, the actors. The acting across the whole ensemble was exceptional. It is unfair to single people out but I am going to give a special shout out to a few of the actors who spoke to my heart. Jack Lowden. I have never seen him before in anything and he just blew me away. He really conveyed a young man, torn between his passion for running and his family/family duties and responsibilities, who was steadfast and resolute in standing his ground and sticking to his principles ("I won't run on the Sabbath"), even in the face of pressure from HRH Prince of Wales. James McArdle was excellent. He played Agathon in Emperor and Galilean and so, like all the actors associated with that production, will always have a special place in my heart. Finally Sam Archer, who I have seen many times in a range of productions for New Adventures, was also exceptional; he always is.

The energy and excitement that the actors put onto the stage was phenomenal. This was especially true of all the "races" that were shown, right from the dash around the College Quad to the 100m and the 400m at the Paris Olympics. The staging is such that the track snakes right round and through the audience so that the actors are running at full tilt right by you as an audience member. This is a real thrill! And the constant firing of the starting gun never failed to make me jump every time it went off, even though I was expecting it!

There is a lot of music, singing and dancing in the production, which I was not at all expecting. James McArdle can sing very well! The music was usually live and all of it was fun and energetic. The music and dance ranged from waltzes, to "Three Little Maids", to Scottish music and dancing!

I really felt a part of the piece, I was totally involved and engaged from the off, and actually I was desperate to get on the stage and join in! (don't worry, I didn't!). The audience in this show are part and parcel of the piece, they create the specific energy of the show on the night that they are seeing it.

The finale with both the Chariots of Fire theme tune and Jerusalem playing really spoke to me, bringing a tear to my eye and tugging at my heart. It really meant a lot to me. (I joined in singing Jerusalem; I couldn't resist; it is my favourite hymn of all time! Then again I used to join in with reciting The Lord's Prayer at the end of Emperor and Galilean!).

In a nutshell, mind-blowing and amazing. Truly exceptional.