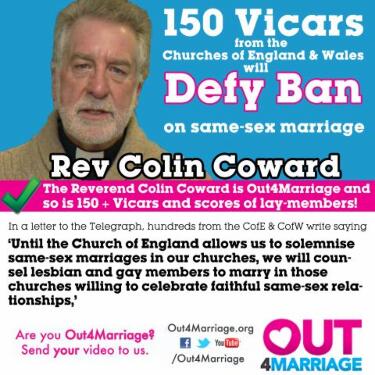 Telegraph:
Anglican vicars threaten to defy gay marriage ban
Vicars are threatening to bypass the ban on same-sex weddings in the Church of England by blessing homosexual marriages performed in other churches.
Leading Anglican campaigners have warned that Government plans to exempt the Church from the new legislation will lead to hundreds of homosexual clergy and worshippers marrying in Quaker and Unitarian services and then returning to the Church.
http://www.telegraph.co.uk/news/religion/9747449/Anglican-vicars-threaten-to-defy-gay-marriage-ban.html

Pink News:
Anglican vicars say they will defy equal marriage ban on Church of England
Vicars from the Church of England have threatened to find a way of bypassing the ban on the church performing same-sex weddings in upcoming marriage equality legislation, by blessing ceremonies held in other churches.
http://www.pinknews.co.uk/2012/12/16/anglican-vicars-say-they-will-defy-equal-marriage-ban-on-church-of-england/