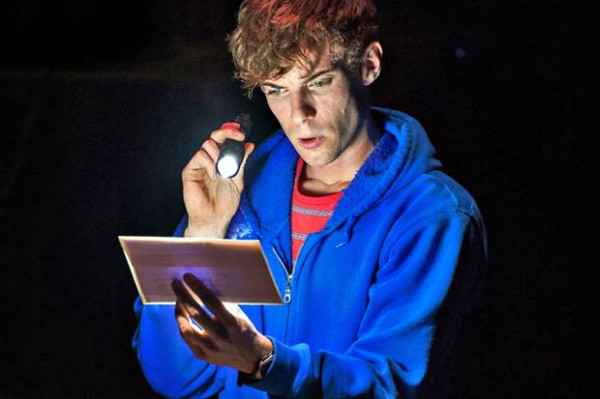 Luke Treadaway in The Curious Incident Of The Dog In The Night-Time, National Theatre (Cottesloe)
Photo credit: http://www.standard.co.uk/arts/theatre/the-curious-incident-of-the-dog-in-the-nighttime-cottesloent--review-8005279.html

The Evening Standard Theatre Awards 2012 Shortlist was revealed last Monday (12 November) and they will be awarded this Sunday (25 November) in a ceremony taking place at the Savoy Hotel.

Belatedly here are the shortlisted candidates that I am backing:

The National Theatre has a total of 8 shortlisted nominations.

The full list of awards and shortlisted candidates can be found here:
http://www.standard.co.uk/arts/theatre/evening-standard-theatre-awards-adrian-lester-and-his-writer-wife-lolita-chakrabarti-shortlisted-8306478.html
http://www.officiallondontheatre.co.uk/news/latest-news/article/item161695/husband-and-wife-make-standard-shortlist/ 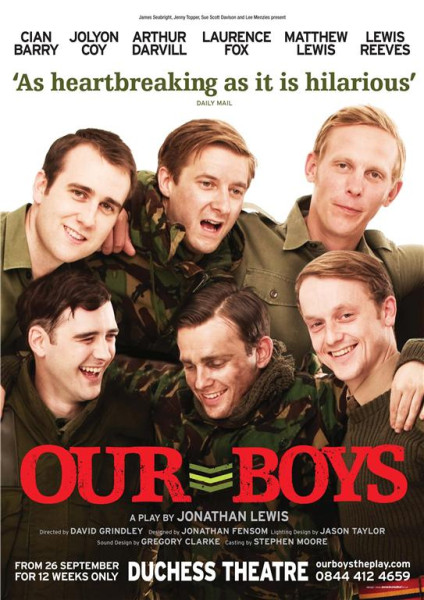 Our Boys, Duchess Theatre
Runs through to Saturday 15 December

This searingly honest and explosively funny play is based on the author's own army experience.

Six young soldiers are killing nothing but time as they recover from injuries incurred in the line of duty. Suddenly, the joshing banter and easy camaraderie of this unlikely band of brothers is jeopardised. A dangerous incident and an act of betrayal result in charges of misconduct looming – and as accusations fly, the fighting really starts.

Fired by anger at the neglect of our wounded heroes and set in 1980s Britain, Our Boys remains as relevant now as it was in 1993, when it won a Best New Play award for its premiere production.

Follow the link for all the production details and to buy tickets:
http://www.ourboystheplay.com/

See the cast talking about the play: 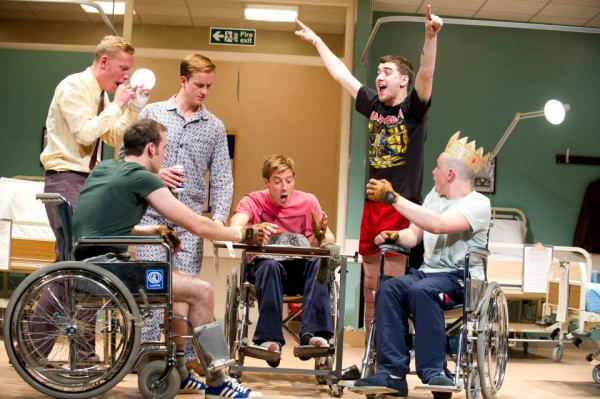 I have seen this twice - for the first time on Tuesday 9 October as part of the Whatsonstage Group Outing and for the second and last time on Saturday 17 November.

I would be being very remiss if I didn't go all out to promote this play and this production to everyone I know.

Obviously the play is right up my street. An all-male cast, and subject matter that covers male friendship and bonding, masculinity, the Army, War and its aftermath, post-traumatic stress disorder (PTSD), physical and mental health and well-being, loyalty, betrayal, and what happens to friendship and comradeship when the chips are really down.

The ensemble cast conveyed very strongly the strong bonds that develop between soldiers in a unit or, in this case, wounded soldiers in a hospital bay. The strong friendships that are built; the close-knit "family" atmosphere of being in the Army; and the over-riding importance of looking after your mates - your comrades - first and foremost; of having their back. How putting anything over and above this is the worst and most heinous crime you can commit, the most shocking form of betrayal.

All six actors are excellent but I am going to single out Laurence Fox playing Joe and Lewis Reeves playing Ian. Laurence as Joe managed to capture a very real dichotomy - someone who is caring and compassionate and looks out for, and after, all of his comrades, and yet is capable of the most extreme and savage acts of violence and anger - moments when he just "loses it" - someone you love and fear both at the same time. Laurence nailed the part and I thought his performance was quite simply off the scale. Lewis as Ian, over the course of the play, goes from being a "vegetable", a near write-off, to a fully recovered soldier, ready to return to duty. To be able to pull that off, convincingly, especially for such a young actor, is a remarkable achievement.

Again, what I loved about the play and this production was that it was all about the acting. One set, no tricks or effects, six actors. The whole focus is the characters and the interactions between them - that is the sort of theatre that I value and respect and enjoy above all else. One very small aspect that I loved about this production - having the stage hands dressed as male nurses. That really worked for me!

The play has two powerful, moving and shocking endings - the one which takes us to the interval and the one which closes the play, both scenes of pain (one physical, one emotional). The scene that closes the play is when Joe tells his story in his own words of how and why he came to be in the hospital - what happened to him and how he sustained his injuries - mental more than physical. The scene is powerful, moving and, ultimately, heartbreaking. Although Joe appears to be the one who is the nearest to full recovery, the reality is that he is so traumatised by his experience, and its long-term effects are so long-lasting, that he is the one soldier who is probably the least likely to ever be fit for any form of work ever again - his mental scars are just too great.

The play destroyed me both times I saw it and there are a few moments in the play which are literally unbearable to watch. One reason for the long gap between my viewings of the play was that it is very hard to sit through the play a second time when you know what it coming at the end.

The play brought out very strongly that for these young men the Army, and being a soldier was everything; as one of them says the Army is his home, his marriage and his mistress. In fact, one of the six soldiers commits the ultimate act of betrayal and turns his friends in just to ensure that his own position in the Army is guaranteed. The play gave a very real sense that if the Army discharged these men because of their mental and/or physical injuries, ie dispensed with their services, it would be like throwing them onto the scrapheap, and this is what they would feel and how they would view it. This is a reality - those discharged from the Army are more likely to have broken marriages, or end up homeless, or in prison, because they are unable to adjust back to civvy street; there is nothing else for them.

The play is set in the 1980s and is speaking about British soldiers serving in Northern Ireland. For me, the play is even more powerful and pertinent today, because of the large numbers of British soldiers serving in Afghanistan and Iraq right now. How we can ask our young soldiers to go out there and put them through this is beyond me. I don't think it is fair or right for us to ask them to serve in those areas, and to inflict this kind of mental, psychological and physical damage on them, which will stay with them for the rest of their lives.

Jonathan Lewis: "You only need to scratch the surface to find out that they're as vulnerable as anybody else".

I LOVED this play, which is even more relevant and pertinent now than when it is set in the 1980s. This production was outstanding, with an excellent ensemble cast. The play has moments of high drama and tension, laughter and tears; and its close is emotional, moving, powerful and shocking. I like plays that cover serious issues in depth and that set me thinking - this play got me thinking about PTSD in the Army and, more importantly, about the very real and long-lasting effects of war on the emotional and physical well-being of young British soldiers serving out in the Middle East today. Highly recommended - an absolute must-see. 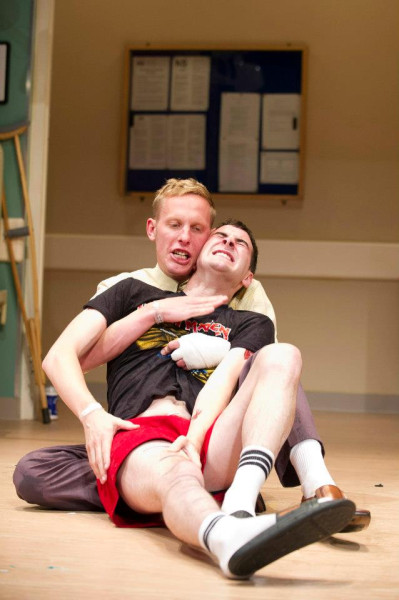