The Royal British Legion: Shoulder to shoulder with all who Serve

The Royal British Legion is the UK's leading Service charity. We provide practical care, advice and support to serving members of the Armed Forces, veterans of all ages and their families.

Find out all about the Royal British Legion and its work here:
http://www.britishlegion.org.uk/

From a letter from The Royal British Legion:

Many people associate Remembrance Day with the soldiers of World War I and II, the heroes of D-Day, or the Battle of Britain. Some people think of the deeds of the SAS during the Falklands conflict. Or, of course, Flanders Fields from World War I, carpeted in poppies growing where so many men lost their lives.

But in the last few years Remembrance has also been about the nation showing its support for the soldiers returning injured and traumatised from current conflicts. If any of them are wounded out there, they're going to need the support of charities like The Royal British Legion. 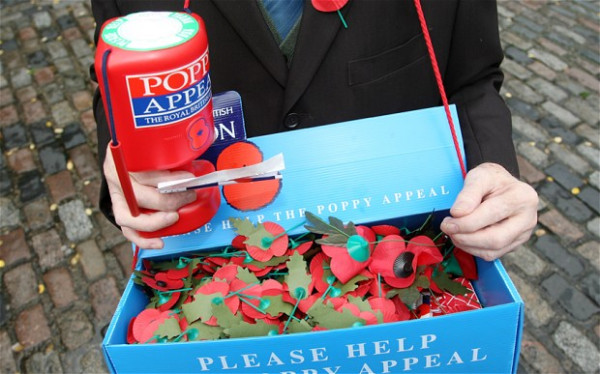 Each year the nation expresses its unequivocal support for The Royal British Legion's work through the Poppy Appeal.

The Appeal is the Legion's biggest fundraising campaign and runs year-round. Lapel poppies are available to buy in shops, supermarkets, pubs and clubs from the last week of October until Remembrance Sunday, or 11th November, whichever is later in the calendar.

It takes 350,000 volunteers and staff to organise the Poppy Appeal each year. Money raised goes to support our welfare work for the Armed Forces community.

Times are hard. But, if you can spare some money, please do consider a donation to The Royal British Legion. It will make a real, immediate difference, helping brave men and women who may be at their lowest point and in desperate need of your support.

You can make a donation to The Royal British Legion and its Poppy Appeal here:
http://www.britishlegion.org.uk/support-us/how-to-give

Thank you for listening and please observe the two minute silence at 11am on the 11th day of the 11th month (ie today!) to remember our courageous Service men and women, past and present.
Collapse