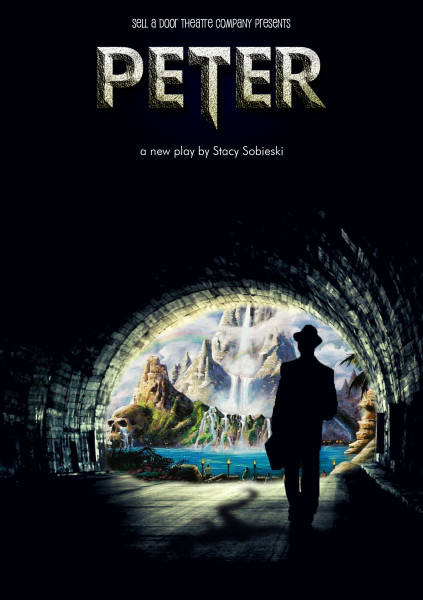 Yesterday (Tuesday 6 November) I went to see Peter at the Lost Theatre, presented by Sell A Door Theatre Company.

Peter Llewelyn Davies was just an infant in his pram when he served as inspiration for J.M. Barrie’s most famous creation, Peter Pan. With the story proving to be an immediate smash hit, a reluctant Peter found himself thrust into the media spotlight. But then one day, Peter did the unthinkable ... he grew up!

Picking up where Finding Neverland left off, we follow Peter Davies from his carefree childhood to his troublesome adulthood. As Peter struggles to form an identity of his own and to separate himself from what he describes as “that terrible masterpiece”, he begins to spiral into deep depression. As the walls come crashing down around him, Peter searches desperately for that elusive glimmer of hope, which had once shone so brightly in his boyhood. Will he find it, or do happy endings only exist in fairytales?

Follow the link for the full production details and to buy tickets:
http://www.losttheatre.co.uk/index.php/whats-on/11-current-shows/53-peter

Sell a Door Theatre Company present this new play by up and coming writer Stacy Sobieski.

I was really keen to see this play as, although I am very familiar with the novel Peter Pan, I know next to nothing about the real Peter (Peter Llewelyn Davies) that the character was based on. I was interested to find out what effect having such a famous creation named after you had on you as a person and on your future life.

The play very much focused on the difference between Boys and Men and what being a Man really meant. One view you could hold of Peter Pan was not that he was having fun, living the life of riley, and never having to grow up or take on any adult responsibilities, but to view Peter as a sad lonely little boy, with no parents or family. Someone who failed to grow up, not because he was having so much fun and did not want to grow up, but because he was actually incapable of real mature adult love. A central aspect of being a Man, as brought out in this play, was that you were capable of a real adult relationship, based on real adult love.

I really enjoyed the play because I loved learning about the real family that Peter Pan, the novel, was based on, and discovering each of their real-life stories and histories (of which I was totally oblivious until tonight).

There were certain aspects of this production that I loved and that are worth a mention. The children were played by adults playing children, and that really worked very well. One of the "boys" was actually played by a woman and that - to my surprise - worked very well too. I liked the ladder up to the window being used to symbolise the ladder up to heaven/afterlife; one by one each of the real characters ascended the ladder and entered heaven/afterlife.

What really worked for me was that in the second half they had a Peter Pan, dressed exactly as you would imagine Peter Pan to be. I think the reason for the device was to show that the real Peter was increasingly haunted and plagued by the fictional Peter, and the fictional Peter was casting an increasingly dark shadow over the real Peter's life. It was great to see this played out on the stage.

To summarise, I really enjoyed this production; it really brought this period to life for me; I was very interested to learn about the personal stories and the histories of the Llewelyn Davies family; I loved having the fictional Peter increasingly haunt the real Peter towards the end of his life; and I thought the whole production was excellent. Recommended.

But the production closes this Saturday (10 November) so, if you want to see it, you need to get your skates on and book your tickets now!

Having seen the play, I wanted to find out more about Peter Llewelyn Davies. You can learn all about him here:
http://en.wikipedia.org/wiki/Peter_Llewelyn_Davies
When you read his Wiki, you realise how true the play is to his real story.

And finally, this is a very quick plug for the Lost Theatre. I really love this theatre. It is very much on my doorstep (or at least as "on my doorstep" as any theatre in London will ever be!) as it is a 5-10 minute walk from Stockwell tube station. It is a small modern theatre with steep tiered seating so that everyone has a clear view of the whole of the stage - there is not a single "bad" seat in the House. To me, as a regular theatregoer, that is THE most important thing and you will be surprised how many of the big name West End venues fail that basic test. Also great bar with the full range of drinks, including cocktails, and all the snacks you could wish for - great prices too. And to top it off, first-rate personalised friendly service. All in all, VERY HIGHLY RECOMMENDED!