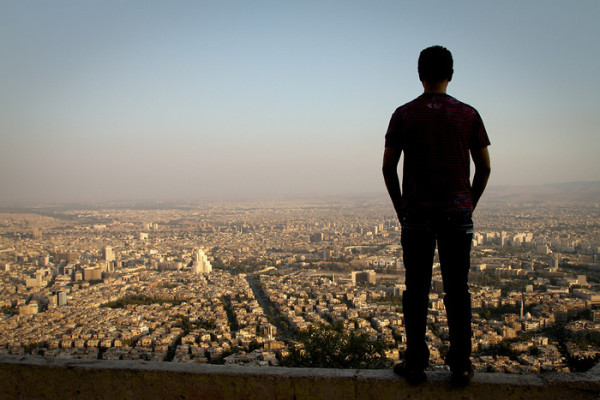 Photographer and copyright: Bradley Secker
Photo credit: http://www.bradleysecker.com/
Bisam looks out onto Damascus from a mountain surrounding the city. He is tired of waiting to hear news from the UNHCR regarding his resettlement application. Since June 2011 Bisam has been living in Turkey to escape increased danger in Syria's political uprising. The process of registering as a refugee and asking for resettlement has begun again.

I went to the Press Launch of "Kütmaan" on Monday 5 November at the Leighton House Museum, hosted by Peter Tatchell. I loved the exhibition so I decided to post about it and spread the word!

Cut and pasted from the Nour Festival of Arts Programme:

Exhibitions:
‘Kütmaan’: Exploring the realities of Lesbian, Gay, Bisexual and Transgender (LGBT) lives and culture in the Middle East

‘Kütmaan’ is the Arabic for the act of hiding or concealing.

This exhibition forms part of a five-year photographic project documenting the realities of life for some LGBT individuals in the Middle East between 2010 and 2012. The images in this exhibition tell diverse personal stories and relate the experiences of those LGBT people who are forced to claim asylum based on their sexuality or gender identity.

The exhibition highlights the circumstances of gay Iraqi men who have since 2010 been forced to leave their homes due to homophobia and seek asylum in Syria and who are then displaced or resettled into Turkey.

The exhibition also explores LGBT Kurdish identity in south eastern Turkey and documents how these communities are seeking legal equality and acceptance.

Other important themes considered include the prolonged wait of Iranian LGBT refugees in central Anatolia before their resettlement in Europe or North America.

Taken from the Information provided at the Exhibition:

All the individuals in these images have been displaced due to their sexuality and/or gender identity, and are applying for asylum on these grounds. The individuals are from Iran, Iraq, Syria and Turkey. They are all at different stages in the resettlement and asylum process.

Bradley Secker is a British photojournalist and documentary photographer who works around themes of identity and human rights. His work has been published widely in TIME Magazine, the New York Times and The Guardian amongst others. He is currently based in Istanbul.

Follow the link to a CNN feature on the piece:
A life in hiding: How gay men survive in Middle East
http://edition.cnn.com/2012/10/23/middleeast/gallery/middle-east-gay-bradley-secker/index.html

The Exhibition runs until 30 November.

If you want to know more about the Nour Festival of Arts, it has its own website which is here:
http://www.nourfestival.co.uk/

Peter spoke about the experience of LGBT people in Iraq, the Islamist death squads and the mass killings that were now taking place there. He had heard stories of these mass killings a number of years ago but it was only now that the story was being covered in the mainstream media, for example Newsnight. He spoke about how Bradley's photographs gave a human face to the people living under the threat of death. He spoke about how important it was to tell these personal stories and the histories of LGBT people and their lives in contemporary Iraq.

Bradley spoke about how, with his photographs, he wanted to break down stereotypes about LGBT people in the Middle East. He wanted to give them a face and a voice - the exhibition is a collection of photographs but in the main Exhibition room you can also hear the voices of the LGBT people that Bradley photographed telling their stories. Bradley was bringing these stories to a wider audience in the West. He was hoping that this would raise awareness of the plight of LGBT people in some parts of the Middle East.

My favourite photo in the exhibition was of Dani, 23, from Tehran in Iran. It is a photo taken of him in his room, and in the background is a poster of the Istanbul Pride Event in Turkey in 2012. The writing accompanying the piece said "Life for Dani was difficult in the Islamic Republic, although he says the gay community are strong in its capital, Tehran". Something about the photo and Dani completely captivated me - it was a beautiful work of art.

I was also struck by the photograph that I have chosen to use below - the letter that all refugees and asylum seekers dream of receiving.

The key thought that this exhibition prompted in me was the importance of home and belonging. I have faced many difficult times, but I have always been grounded by my home - London, England - and the support network of family and friends that I have around me in this one place. For LGBT people in the Middle East, fleeing persecution and even death, this is the one thing that they do not have. They are constantly moving around and being displaced until they may be lucky and be granted asylum. During that time, they will not have a support network of family and friends, in fact it could be highly dangerous for them to contact family and friends. That brought home to me how difficult their day to day lives would be, in a foreign land, not knowing how long you would be there for, with no family or friends to support you.

The Exhibition gave me an insight into the lives of LGBT people in the Middle East today - a window into their world. In summary, striking, beautiful, moving, powerful, educational. Recommended. 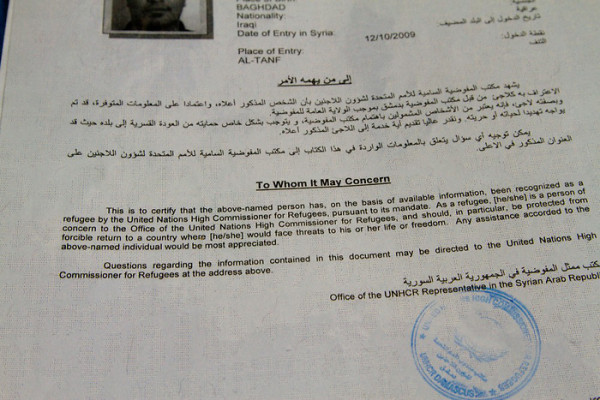 Photographer and copyright: Bradley Secker
Photo credit: http://www.bradleysecker.com/
Mahmoud's refugee certificate provided by the UNHCR. This document has no legal standing to the Syrian authorities, who do not officially recognise it.
Collapse