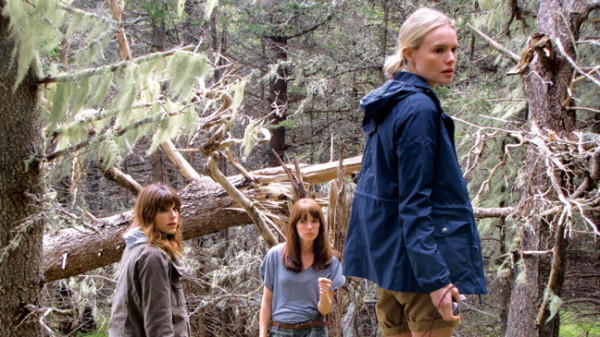 I saw Black Rock on Friday 19 October at Vue as part of the London Film Festival.

Black Rock
Three young women fight for their lives when their camping holiday is invaded by three maniacal ex-soldiers.

In an attempt to iron out a rift between her two childhood friends, Sarah plots a camping trip to a remote island where the trio grew up, hoping that memories of the good old days will be just the thing to bring them back together. As the women begin to reconnect, the burgeoning harmony is shattered by the arrival of three maniacal ex-soldiers, and soon the girls’ weekend retreat turns into a terrifying fight for their lives. Working from a screenplay by indie stalwart Mark Duplass, director Katie Aselton’s survival-horror tale is a hugely exciting thrill-ride, buoyed by the genuine strength of the female characters. The naturalism of the dialogue and performances highlights the mumblecore origins of Aselton and Duplass, building a sense of history between the three women that makes their ultimate descent into terror all the more nailbiting.

Director statement by Katie Aselton
Black Rock was a project that I was incredibly excited to make. Inspired by male-driven thrillers like Deliverance, I loved the idea of exploring the thriller genre – obeying the rules, keeping it brutal and bloody, but at the same time holding it beautiful and strong, with honest performances and powerful cinematography. My first film, The Freebie, was all improvised. Black Rock was fully scripted, but what I wanted to maintain from The Freebie was that feeling of creative collaboration. I come to filmmaking as an actor and I love exploring scenes while we are in them. Actors I work with are encouraged to open up the dialogue within a scene. What I believe in first and foremost as a filmmaker is finding that through-line of truth in a heightened situation, and that often is found in those moments of freedom among the actors. It is the inner strength of the women of Black Rock that really intrigued me. They are women who a thousand years ago were killing beasts to feed their children, but in today’s world are killers in a different way – in the virtual wilderness, and in their personal lives. Now, when push comes to shove and their lives are on the line, they call on that strength that is within each of them, and they fight back. And the idea of making this film about strong women by strong women – a female director, cinematographer, producer and three kick-ass actresses – was truly the most exciting aspect.

I wanted to see this film because I LOVE thrillers. However, women are very rarely the protagonists in thrillers. This film is the exception to the rule!

The central story basically revolves around what happens when a fun camping trip with your two best girlfriends, designed to allow you to remember the good old days when you were all young girls growing up and to bond and reconnect, turns into your worst nightmare. The nightmare involves attempted rape and murder.

The film is raw, uncomfortable and unflinching. It is also very exciting and really got my pulse racing!

As the film unfolds the women go from being the hunted (prey) to seizing control of the situation and becoming the hunters.

The chases and the ensuing violence in the film are very real, and so the film is almost unbearable to watch in places. However, on the plus side, this also makes the film thrilling and exciting and, because the women fight back, empowering too.

There are three women who begin the journey but only two who emerge at the end. The two who are left standing actually have a real issue with eachother, based on something that happened between them in the past. This film shows that women are able to overcome their issues and differences and bond and work together as a team/fighting machine when they are in extreme danger and are required to do so.

The survival instinct within these women is very strong. "I will survive" - and they do!