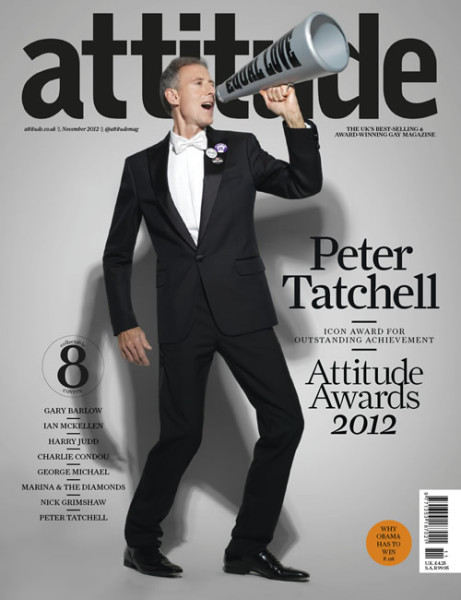 My Director, Peter Tatchell, picked up the Attitude Icon Award for Outstanding Achievement on 16 October 2012.

Peter Tatchell, Lady Gaga, George Michael, Will Young, Gary Barlow and Sir Ian McKellen were among the winners at the inaugural Attitude Awards in London.

Peter Tatchell, the Director of the Peter Tatchell Foundation, won an Icon Award for Outstanding Achievement in recognition of his 45 years of LGBT and human rights campaigning.

Peter Tatchell expressed “huge thanks to Attitude”; saying he was “honoured and humbled” to receive the Icon award:

“I dedicate my acceptance of this award to the heroic LGBT movement in Nepal; in particular to Sunil Pant and the Blue Diamond Society. During civil war and dictatorship, they forged one of the developing world’s most successful LGBT movements. Although much remains to be achieved, activists in Nepal have shown what can be achieved for LGBT rights in the global south. I salute the courageous human rights defenders in Nepal, and in all countries, who are battling for LGBT freedom in adverse circumstances of poverty and tyranny. Their amazing efforts are my inspiration.

“I express my heartfelt thanks to the many thousands of people who have been part of the struggle for LGBT human rights in Britain. Together, in just over a decade, our campaigns against prejudice and discrimination have swept away nearly all of the UK’s homophobic and transphobic laws. In the process, we’ve transformed Britain into a more tolerant and liberal society, which has benefited everyone - LGBT and straight.

“It is such an honour and privilege to have been a small part of one of the truly great social emancipation movements in history - the movement for queer liberation.

“One simple idea has guided my human rights activism: Don’t accept the world as it is. Dream of what the world could be - and then help make it happen."

The Attitude feature (synopsis version) can be found here:
http://www.attitude.co.uk/viewers/viewcontent.aspx?contentid=3041&catid=events&subcatid=attitudeevents&longtitle=ICON+AWARD+-+LIFETIME+ACHIEVEMENT

It makes me happy when deserving people receive awards. I know how hard you work, and what long hours you put in, working tirelessly and relentlessly on behalf of others.

As always, you pay tribute to others and deflect the credit away from yourself. Very inspirational and something to aspire to. Truly humbling.

Finally, these are the highlights of the Attitude Awards ceremony: