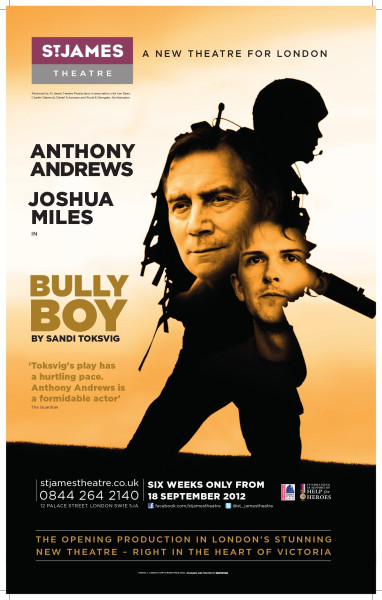 I booked to see this because it was about War, and the Army, and Mental Health - all issues of key concern to me! And I also wanted to check out one of the newest theatres in London's West End - the St James. 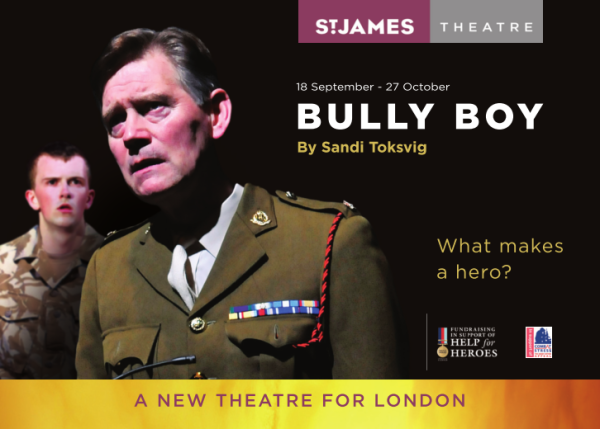 Cut and pasted from the St James Theatre Website:

Major Oscar Hadley is investigating allegations of gross misconduct within a self-styled ‘Bully Boy’ unit of the British army. When young squaddie, Eddie Clark, from Burnley is interrogated, Oscar begins to discover that ‘truth’ in a modern insurgency can be a point of view rather than a fact. Bully Boy tackles the challenging moral issues of contemporary military occupation and its effect on the mental health of serving soldiers. In this ferociously gripping story, Sandi Toksvig, nationally known and loved as a comedian, author and broadcaster, writes with startling insight and tenderness about the minds of soldiers.

Follow the link to the full production details and to buy tickets:
http://www.stjamestheatre.co.uk/events/bully-boy/ 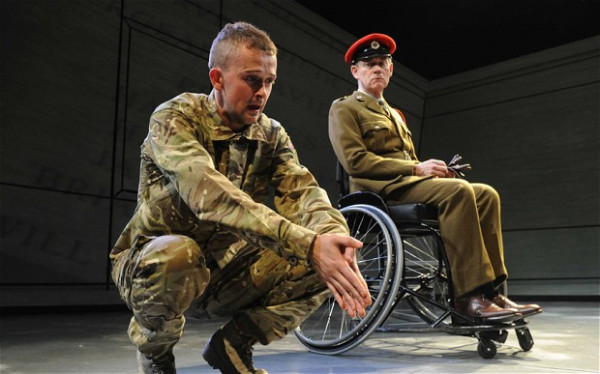 I saw this yesterday - Tuesday 23 October. It was the first time I had seen this play and my first visit to the St James Theatre.

I thought that the production was excellent - I really enjoyed it. It got a standing ovation from pretty much the whole of the audience. This was very well deserved and was a powerful testament to the quality of the acting which was superb.

There are only two actors in the play, and both Anthony Andrews and Joshua Miles were exceptional. I expected that from Anthony Andrews (although I think this is the first time that I have seen him live on stage) but Joshua Miles really held his own and put in an outstanding performance.

The play runs for 1 hour 40 mins with no interval. I prefer it when a play runs straight through, building the characters and the story; in this the pace never lets up and the story and the tension builds to a fitting climax. The play takes you on a journey with no distractions and no interruptions. The atmosphere in the theatre was, at key points, electric.

There was no "set" as such - although images were projected onto a backdrop so this suggested where the action was taking place - these projections were very powerful and very effective. There were also minimal props - just one table and a couple of chairs. They made excellent use of sound effects - the occasional sparse use of gunfire and bombs had people literally jumping out of their seats!

I love theatre when it is stripped to the bone, as it was here. It is what I call "raw theatre" and that is actually my theatre of choice. What this means is that it is all down to the two actors, their acting, their interactions, and the energy that they create on the stage (in this case, the energy on stage at certain times was amazing). In this particular case, both the actors were on top form, and were just outstanding.

Oscar (Anthony Andrews) is a typical upper-class highly educated English officer. Despite this, Anthony Andrews was able to convey that this was a real human being, with a heart and a soul, a caring and compassionate person, who wants to get to the truth and to ensure that justice is done. Eddie (Joshua Miles) is a typical Squaddie, who has not had the benefit of a good education, but has joined the army because it is a career that is open to him, and his Unit has become his surrogate family to whom he is fiercely loyal.

One of the most interesting aspects of the play to me was the interactions between Oscar and Eddie, from completely different worlds, two opposing ends of the military hierarchy and the British class system. The comradeship that they developed for eachother through their shared experience was deeply touching. I liked the exploration of their budding friendship and their deepening understanding of eachother and their opposing worlds.

For me, the key theme of the play was the effect of conflict/war on young soldiers sent to distant lands to fight for King and Country - the effect on their mental health and well-being and on their psyche. These effects are not just during the conflict but can remain with soldiers many years after they return from conflict/war and have devastating effects much later on in life. The play explored the whole issue of post-traumatic stress disorder in an insightful and intelligent way - the way people have to suffer in silence, the devastating and long-lasting effects it can have on your life, and how it can disable you and even destroy/kill you.

The ending is moving, powerful, heartbreaking and realistic. It has true integrity.

One tragic fact that gets you in the guts - in relation to the Falklands, more British soldiers killed themselves (suicides) following the conflict, than were killed in combat/in action duing the conflict.

This closes this Saturday (27 October) so if you want to see it you are going to have to get your skates on!

This was the first time I had been to the St James theatre. I loved it; I would highly recommend it; and I would definitely go back again.

It is in a covenient great location - just by Victoria station, away from the traditional "West End Theatreland" - something I actually preferred. It is geared up to serve its audience so it has a restaurant and a bar.

The main theatre has approximately 300 seats, which makes it a fairly intimate space. It is a brand new modern state-of-the-art theatre. It has proper tiered seating so that every seat in the House has a clear and unobstructed view of the stage - there are no restricted views. As a regular theatre-goer, this is by far and away THE most important thing to me. Prices, for a theatre that receives no public subsidy are reasonable, starting at £20 (there are special deals available too).

So, all in all, I am more than happy to recommend the St James Theatre - Having been once, I would definitely go again.
Collapse