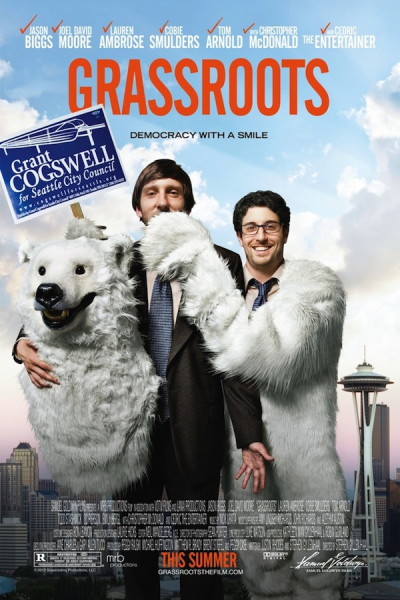 I saw Grassroots today (Monday 15 October) at the Rich Mix Cinema as part of the London Film Festival.

Grassroots
A pertinent and hilarious political comedy set in Seattle.

Seattle, 2001, and jaded journalist Phil Campbell has just lost the job he hated on a freesheet paper. Disheartened, he meets with his pal Grant Cogswell, an unemployed music critic with a penchant for dressing up as a polar bear. Inspired by the city’s iconic monorail, Grant has discovered an idealistic fervour, announcing he will stand against long-term incumbent Richard McIver in upcoming City Council elections. Campbell reluctantly becomes his friend’s campaign manager, only to witness Cogswell’s rhetoric and manner appealing to the hipsters and dreamers of Seattle previously disillusioned with the system. Cogswell becomes an unlikely hero who might just change the city, even the country, for the better; so long as politics don’t change him first.

Stephen Gyllenhaal’s adaptation of real events documented in Campbell’s book Zioncheck for President is a pertinent and hilarious political comedy.

Director statement: Stephen Gyllenhaal
‘Laugh. Cry. Vote for the little guy.’ That's our slogan for Grassroots, and from the beginning I’ve had a gut instinct that this story might deeply move other people feeling alienated from democracy by the mega-politics of super PACs, secret deals, and perfectly coiffed candidates. Is it possible that this one funny, true Seattle story could reverberate across the years and have an effect on the 2012 election? I truly hope so. That’s why in every city, starting when the film opens – where else? – in Seattle, we'll set up an informal chat between a real local candidate and audience members. Nothing scripted, no handlers, no pre-packaged stump speech. We’ve learned Grassroots, the movie, generates lots of hope, laughter and talk. Follow us across the street into your local coffee house after the credits roll, and we’ll open up any can of worms you like. Then maybe you’ll feel hopeful, you’ll feel like you can make a difference, you’ll feel part of the process again. And your talk can become action, and your action can effect real change. GRASSROOTS!

Totally unexpectedly, I connected with this film very deeply, as it featured a lot of themes that I have personally been working through in my own life in recent times.

This is a film about politics - how, even in this day and age, you - the little man - can make a real and tangible difference in the big bad world of politics, even when it is dominated by big corporates and high finance, with tons of money behind them. It talks about direct action, community and grassroots activism, and the end result was that it made me very excited about politics again. It made me believe that you can make change happen, even in today's world, if you have a vision and you really believe in what you are saying and what you stand for.

Very early on in the film when Phil is challenged by his girlfriend on why he is continuing to act as the campaign manager for his friend Grant, when he has a real possibility of proper paid employment, Phil says because he has to do what he believes in. This is something I myself have felt very strongly over the past 6 months, when I have been torn between my voluntary/charity work, and becoming a wage slave again, and at the moment I have also decided, like Phil, to run with focusing and working on things that I really believe in, am passionate about and committed to.

One aspect of this film that really struck home was that it depicts the moment in time when 9/11 happened and the effect of that terrorist atrocity on everyone in the US, as represented by the characters in the film. I also vividly remember 9/11 and what I felt, and what my friends and family felt, at the time. It mirrors the reaction of the characters in the film. We felt shocked, upset, gutted, and traumatised. 9/11 stopped the world on that day. I think this film is one of the best I have seen in terms of depicting the effect of 9/11 on the hearts and minds of ordinary US citizens on the fateful day itself.

To summarise, I really enjoyed this film - I thought it was excellent, and I would thoroughly recommend it to anyone disillusioned with the current political status quo, who is looking to effect change on a particular issue or at a local level, and who wants to be inspired and excited about politics again. It definitely fired the blood in my veins!
Collapse