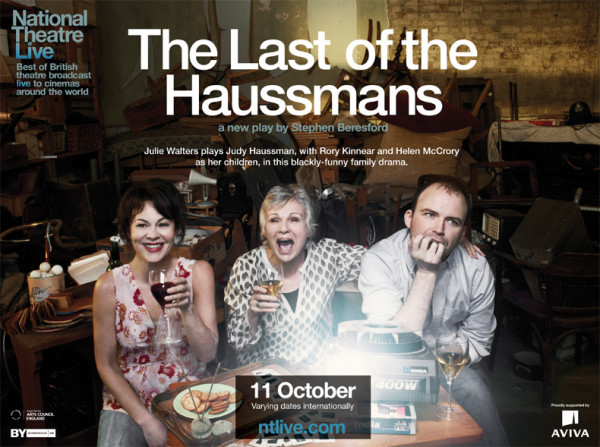 The Last of the Haussmans gets its NT Live today, so it will be broadcast live from the National Theatre into cinemas across the UK and around the world. As per usual, I will be at the Brixton Ritzy to see this.

The Last of the Haussmans
A new play by Stephen Beresford

The National Theatre's smash hit new production of Stephen Beresford's new play The Last of the Haussmans will be broadcast live to cinemas across the UK on 11 October.

This live broadcast is the final performance of the production's sold-out run at the National, so if you haven't yet been able to see it, this is your last chance to experience this savage, funny play and its acclaimed performances.

Anarchic feisty but growing old, high society drop-out Judy Haussman remains in spirit with the Ashrams of the 1960s while holding court in her dilapidated Art Deco house on the Devon coast.

After an operation, she’s joined by wayward offspring Nick and Libby, sharp-eyed granddaughter Summer, local doctor Peter, and Daniel, a troubled teenager who makes use of the family’s crumbling swimming pool. Together they share a few sweltering months as they alternately cling to and flee this louche and chaotic world of all-day drinking, infatuations, long-held resentments, free love and failure.

Stephen Beresford’s The Last of the Haussmans examines the fate of the revolutionary generation and offers a funny, touching and at times savage portrait of a family full of longing that’s losing its grip.

The NT Live website, where you can find out more information about the production and also find your nearest cinema showing NT Live, is here:
http://microsites.nationaltheatre.org.uk/45462/home/national-theatre-live-homepage.html
Collapse