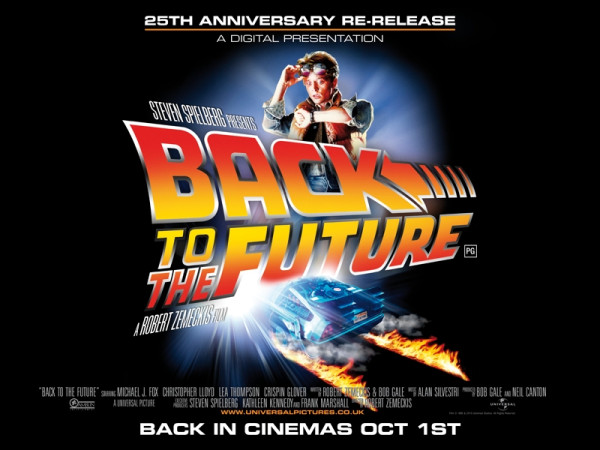 I was lucky enough to see "Back to the Future" - another of my top three films of all time - today on the big screen at Ravenscourt Park.

I love Back to the Future with all my heart and soul and it was a real joy to be able to see it on the big screen again and to share my love of the film with so many others. It is very easy for me to articulate why I love the film - it is positive, upbeat and uplifting - and whenever I watch it it puts a real smile on my face and a spring in my step. I love the concept that you make your own destiny and the thought that "if you put your mind to it, you can accomplish anything". I back and endorse that statement 100%.

Back to the Future is a 1985 American science fiction adventure comedy film. It is directed by Robert Zemeckis, written by Zemeckis and Bob Gale, produced by Steven Spielberg, and stars Michael J. Fox, Christopher Lloyd, Lea Thompson, Crispin Glover and Thomas F. Wilson.

The film tells the story of Marty McFly, a teenager who is accidentally sent back in time from 1985 to 1955. He meets his future-parents in high school and accidentally attracts his future mother's romantic interest. Marty must repair the damage to history by causing his parents-to-be to fall in love, and with the help of scientist Dr. Emmett "Doc" Brown, he must find a way to return to 1985.

Back to the Future was released on July 3, 1985 and became the most successful film of the year, grossing more than $383 million worldwide and was met with critical acclaim.

Back to the Future celebrated its 25th anniversary in 2010 and was re-released into cinemas at that time. This is the trailer for the re-release into cinemas:


If you have never seen it - what are you waiting for? - see it now! Available to buy from Amazon for under £3:
http://www.amazon.co.uk/Back-To-The-Future-DVD/dp/B000BVK82I
Collapse