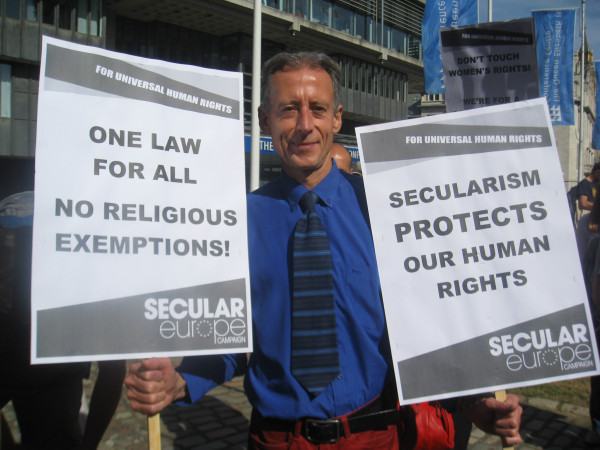 Peter Tatchell carrying my favourite banner for the March "One law for all. No religious exemptions".
Photographer: Rakshita Patel

Cut and pasted from the National Secular Society Website:

The Secular Europe Campaign promotes:
- freedom of religion, freedom of conscience and freedom of speech
- state neutrality in matters of religion and belief
- women's equality and reproductive rights
- equal rights for LGBT people in all the European Union
- one law for all, no religious exemptions from the law
- a secular Europe – democratic, peaceful, open and just, with no privilege for religious or belief organisations

This is a personal write-up of my experience on the march and the rally.

I decided to join the campaign for a Secular Europe's march and rally because, although I am a Christian, I do not believe that religion should have a privileged place in State and Society. State and religion should be separate; they should not be intertwined. I believe that is very important if we are to have a flourishing Western liberal democracy.

Some Campaign slogans that I enjoyed chanting:
"What do we want? A Secular Europe! When do we want it? NOW!"
"2-4-6-8 Separate Church and State". I found out about the March and the Rally because my boss, Peter Tatchell, was speaking at the event. I am biased but, having heard Peter speak live at a number of events now, I sincerely believe him to be one of the most impressive public speakers I have had the privilege of seeing/hearing. He emphasised the need for everyone to be equal under the law; that there should be no religious exemptions. I fully back and support this. Peter also made the valid point that a secular Europe is one of the most powerful guarantors of religious freedom. I agree with that statement. Finally, I appreciated the fact that Peter was one of the few speakers to acknowledge and recognise the fact that people of faith do proactively campaign for human rights and to progress equality and diversity.

I was disheartened to see and hear how anti-religion and anti-faith many of the speakers and the protesters were. I can see things from both sides - I was a committed atheist for 41 years and I have been a committed Christian for 18 months. In my Civil Service job, whilst I was a committed atheist, I did a lot of work with the whole range of faith and non-faith organisations. I wanted to make one point - a high proportion of people of faith are passionate about human rights, equal rights, equality, inclusion and diversity. That fact should have been recognised on the march and at the rally but it was not.

One final thing. One message is beginning to grate with me. A White woman spoke about how she found the Hijab and the Niqab offensive and an affront. She claimed that men (fathers and husbands) were dictating to Muslim women what they can and can't wear in public and that this illustrates the oppression of women in Islam. I have had enough of this argument!

And on that note, I am signing off!

The Twitter hashtag for this March was #SecularEurope.
Collapse