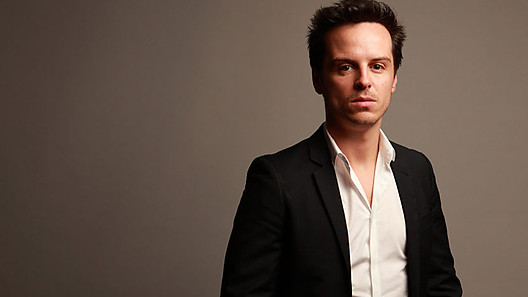 The new Andrew Scott drama, The Scapegoat, screens today on ITV1 at 9pm.

Set in 1952, as England prepares for the coronation, The Scapegoat tells the story of two very different men, John Standing and Johnny Spence, who have one thing in common - a face. Almost exact replicas of each other they meet by chance in a station bar, each at a crossroads in their life: one setting out on a walking tour after losing his job as a teacher; the other avoiding home after a disastrous business venture.

The charming and charismatic Johnny wines and dines his new acquaintance but when John wakes the next morning with a hangover he is alone and a chauffeur is standing outside his room, waiting to take him 'home'. Despite his protests, John finds himself sucked irresistibly into another man's life.

Stepping literally into his double’s shoes, the inexperienced schoolmaster is suddenly responsible for a crumbling stately home, a failing business and a dog who doesn’t recognise him. Literally Lord of all he surveys, he is master of nothing and, for the first time in his life, has to deal with women, specifically a distraught wife, a drug taking mother, a sister who despises him, an eccentric daughter and two mistresses, one of whom happens to be married to his younger brother.

Although he tries at first to escape, John finds himself increasingly attracted to this disparate and dysfunctional group of women and slowly his presence starts to alter the chemistry of the household. Just as he seems to be making progress, John finds himself falling in love. Then his nemesis Johnny returns in secret to the house with evil intent ...

Filled with Du Maurier’s trademark elements of suspense, dark humour and unexpected twists, The Scapegoat is an atmospheric story in the tradition of the writer of Don’t Look Now, Rebecca and The Birds.

The 100 minute single film is written and directed by Charles Sturridge and produced by Sarah Beardsall and Dominic Minghella's production company, Island Pictures.