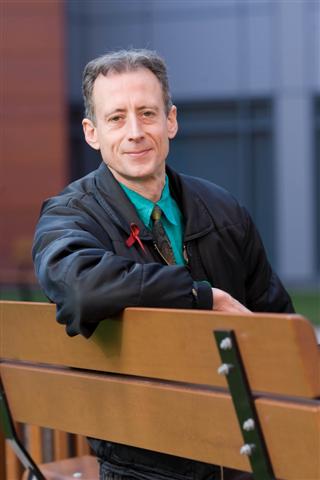 This is my write-up of Peter's talk. Enjoy!

Peter then recalled the day when he and three other members from Outrage! tried to effect a citizen's arrest on Robert Mugabe when Mugabe was in London to do some Christmas shopping in Harrods. Peter and the other activists had the evidence they required to make the arrest, based on documented evidence of Mugabe sanctioning torture. Peter really knows how to tell a good story! The tale was engaging and funny, but he also managed to convey how nerve-wracking and terrifying it was for the activists involved to attempt such a thing. The outcome was that it was Peter and the Outrage! activists who got arrested and spent the night in police cells whilst Mugabe got a police escort to and from Harrods. I think that story illustrates perfectly how Justice is often not being done in the world, and how those holding positions of high state can literally get away with murder in some cases. The one positive outcome was that the attempted citizen's arrest generated a lot of media coverage which served to highlight the human rights abuses occurring in Zimbabwe at the time; something that the more peaceful and traditional forms of protest had failed to achieve. What worried me and, if I am honest, scared me, was that for Mugabe to have got away there would have had to be collusion from the British Labour Government at the time, including the Prime Minister and the Foreign Secretary. This appalls me.

Another example of someone who could be seen to be "getting away with it" was Henry Kissinger, and more broadly the US Government, for their carpet-bombing of Cambodia.

A very recent example of others "getting away with it", and one that is very close to my heart and very personal for me, is George Bush and Tony Blair and their illegal war on Iraq.

Peter argued very convincingly that double standards were at play - that there were some nations/leaders who had committed human rights abuses and violations, and they would be allowed to get away with it because they were simply too powerful to be brought to court/trial eg Bush, Blair, Kissinger. But the fact remains that no nation, and no individual, should be seen to be above the law.

Peter argued very strongly that there should be universal human rights laws, which had worldwide jurisdiction, and that these laws should be backed up by some form of permanent enforcement agency - the laws had to be seen to be upheld, otherwise there would be no incentive for states or dictators to abide by the laws.

Peter had a positive view on progress and said very clearly that he felt that over the years consciousness on these issues had been raised and momentum for change had been building. The current laws were a very good starting point, they were a statement of good intentions, but the challenge now was how to make that statement of intent a reality?

Peter then talked about how he had been working with some colleagues in the Green Party to develop a Global HR Index. This would allow the international community to measure nation states and rank them in terms of how well they were doing on human rights issues. It would enable you to look at the trends, ie were things getting better of worse in a particular country? Interestingly, when this exercise has been piloted, the US is not at the top of the table as you would expect, but only somewhere near the middle of the table. Finally, it would ensure that there was a real momentum and a moral pressure on nation states to improve their human rights records, as they would be being named and shamed if they violated human rights in their countries.

Peter had a very optimistic view - he felt that people from the future would look back at us now and ask how could these people sit back and do nothing whilst all these human rights abuses were taking place across the world? He was clear that, over the years, progress was being made on human rights issues, and that we were in a better place now than we had been in the past, and that things would improve in the future. That was a very positive and uplifting way to end the talk.

Overall, I loved listening to Peter speak. I thought he was a very impressive speaker, and he managed to be engaging and interesting on a topic (international human rights law) which could have been very dry and boring. He livened up his talk with his personal stories and anecdotes and I loved that. I would definitely go and hear Peter speak again! Highly recommended.

An audio of the whole talk has now gone up online, so if you want to listen to it you can find it here:
http://poddelusion.co.uk/blog/2012/09/01/peter-tatchell-human-rights-vs-human-wrongs/
Collapse