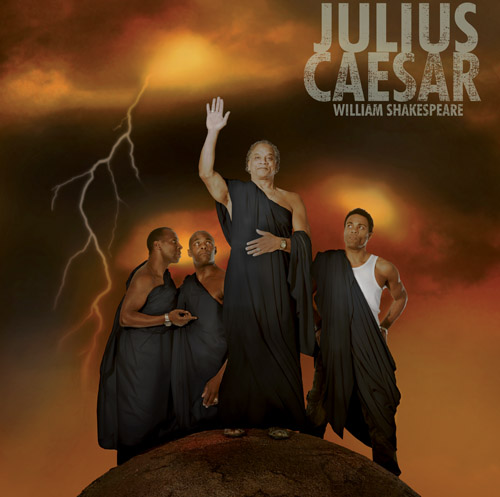 There is a real wealth of production information on this production here:
http://www.rsc.org.uk/whats-on/julius-caesar/

You can view the trailer here:
http://www.rsc.org.uk/whats-on/julius-caesar/trailer.aspx

You can buy tickets here:
http://www.delfontmackintosh.co.uk/Tickets/JuliusCaesar/JuliusCaesar.asp

I saw this on Saturday 18 August.

Firstly, I thought the relocation of the story to Africa, and a contemporary modern Africa, worked really well. The production felt authentic, modern, real, "now". For me anyway, it added to the potency of the piece. The story is, of course, something that is happening in many places across the world, right here, right now, including in Africa.

I loved the live band and the live music who were on stage early to provide a prologue to the play. I thought they did an excellent job at setting the scene and creating the right mood. I really appreciate these prologues that sometimes occur before the formal start of a play, but I wish theatre companies would give you an advance warning so that if you want to come and see them you know they are on and you can get there a few minutes early!

The assassination scene in this Julius Caesar is one of the most powerful, brutal and moving assassination scenes I have ever seen in Julius Caesar (and I have seen my fair share!). It really brought home to me the severity, and the sheer horror, of the crime that the conspirators had committed, and it served to reinforce my firm belief that murder in cold blood can never be justified (this is something I have been thinking about recently!). 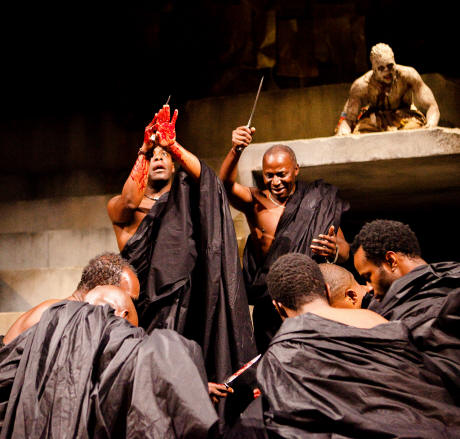 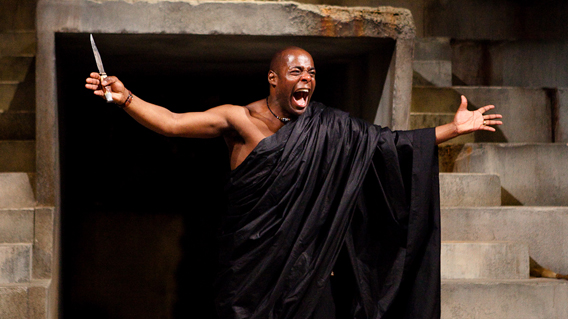 Whilst this is by no means the best Julius Caesar I have seen, it is unique because of its African setting and its all-Black cast. It also features two towering tour de forces, from Paterson Joseph as Brutus and Ray Fearon as Mark Antony, both of whom give powerful mind-blowing performances. I have been a Paterson Joseph fan for many many moons, but I became a Ray Fearon fan overnight! On the basis of these two towering performances, I would say that this production is a must-see. I am highly recommending it - go and see it now! 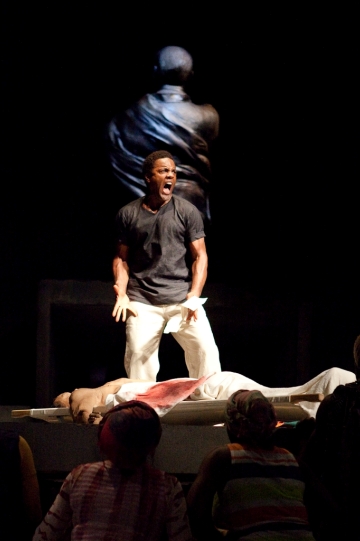 Finally, something that the RSC did on the night that I, as a regular theatregoer, really appreciated and valued. I had bought a cheaper seat in the Grand Circle as I prefer to see a larger range of plays by going for the cheapest seats in the House, rather than a much more select range of plays by going for the most expensive seats in the House. When I got there, as it was a quiet night, I found that the RSC had decided to close the Grand Circle and they had upgraded me to the Stalls. I thought this a brilliant idea and I really appreciated it. Much better for both the actors and the audience. I only wish more London theatres operated a similar policy! Rat, Wedding, Bow - the words that hint at the themes for each of the next three Sherlock episodes have been revealed. But what do they mean?

Rat, Wedding and Bow were the three words revealed by Steven Moffat and Mark Gatiss at the Edinburgh TV Festival Sherlock Masterclass, supposedly hinting at the themes of each of the third season's episodes. But what could they mean?

The first thing that springs to my mind when I hear the word Rat in relation to a Sherlock Holmes story is The Boscombe Valley Mystery, in which a young man is implicated in his father's murder, the key to which is the true meaning of a dying reference to "a rat".

Next we have Wedding, which immediately suggests the marriage of Dr Watson to Mary Morstan, the heroine of The Sign of Four. Could this mean wedding bells for John? And if so, who might be the lucky lady?

Everyone's favourite lab geek Molly Hooper currently has a major crush on Sherlock, but some have suggested she might transfer her affections to John in the future. The argument goes as follows: Molly has a cat called Toby. Toby is the name of the bloodhound used by Holmes to track the villain in The Sign of Four. The Sign of Four is the story that introduces Mary Marston. Mary Marston later married John Watson.

Are these early clues left by Gatiss and Moffat for eagle-eyed fans to discover? Are they coincidences? Or are they the writers' cheeky attempts to throw us off the scent? I don't know, but I could have a good guess...

Finally, we have Bow, and this is the clue that could suggest we won't be seeing any more of Sherlock after series three. Is it a reference to bow-ties? We know from Doctor Who that Steven Moffat has a penchant for them. More likely, that's the wrong pronounciation and we're looking at His Last Bow, Holmes's final case, which sees the ageing detective - codenamed Altamont - going up against German spies as part of the British First World War effort.