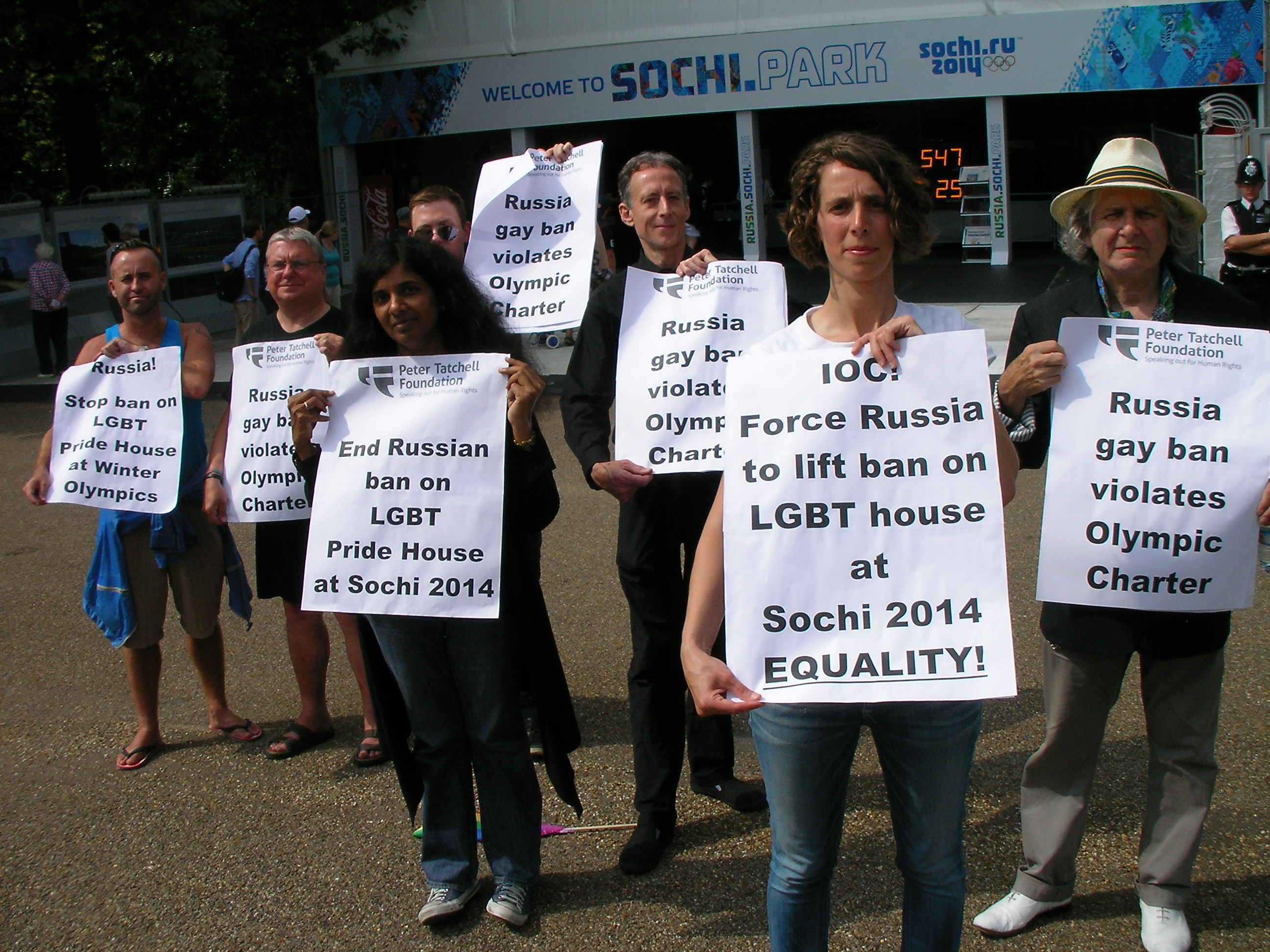 “Russia must drop its ban on a LGBT Pride House at the 2014 Winter Olympics in Sochi. The IOC should enforce the Olympic Charter and compel Russia to allow a Pride House for lesbian, gay, bisexual and transgender (LGBT) athletes.”
This appeal comes from protesters who picketed the Sochi 2014 Winter Olympics Exhibition in Kensington Gardens, London, on Thursday 9 August.

“London 2012 has a LGBT Pride House but Russia won’t allow one at Sochi. This ban is part of a wider crackdown on LGBT communities and visibility in Russia. It is an attack on freedom of expression and association, and coincides with new laws in several parts of Russia that ban so-called homosexual propaganda,” said Peter Tatchell, Director of the Peter Tatchell Foundation and coordinator of Thursday’s protest.

“We have written to the IOC, urging them to intervene. Russia’s gay ban is contrary to the equality and non-discrimination provisions of the Olympic Charter. The IOC is duty-bound to require Russia to permit a LGBT Pride House,” he said.

Other participants in the protest echoed Mr Tatchell’s concerns.

Rakshita Patel, from the Peter Tatchell Foundation, added:
“It is really important for LGBT athletes to have a safe, welcoming space - with their friends and family - especially in countries like Russia where the atmosphere is currently very homophobic.”

Megan Worthing-Davies of Pride Sports (UK), said:
“The laws being used to forbid Pride House in Sochi are immoral, unfair and archaic. We call on Russia to repeal this ban.” 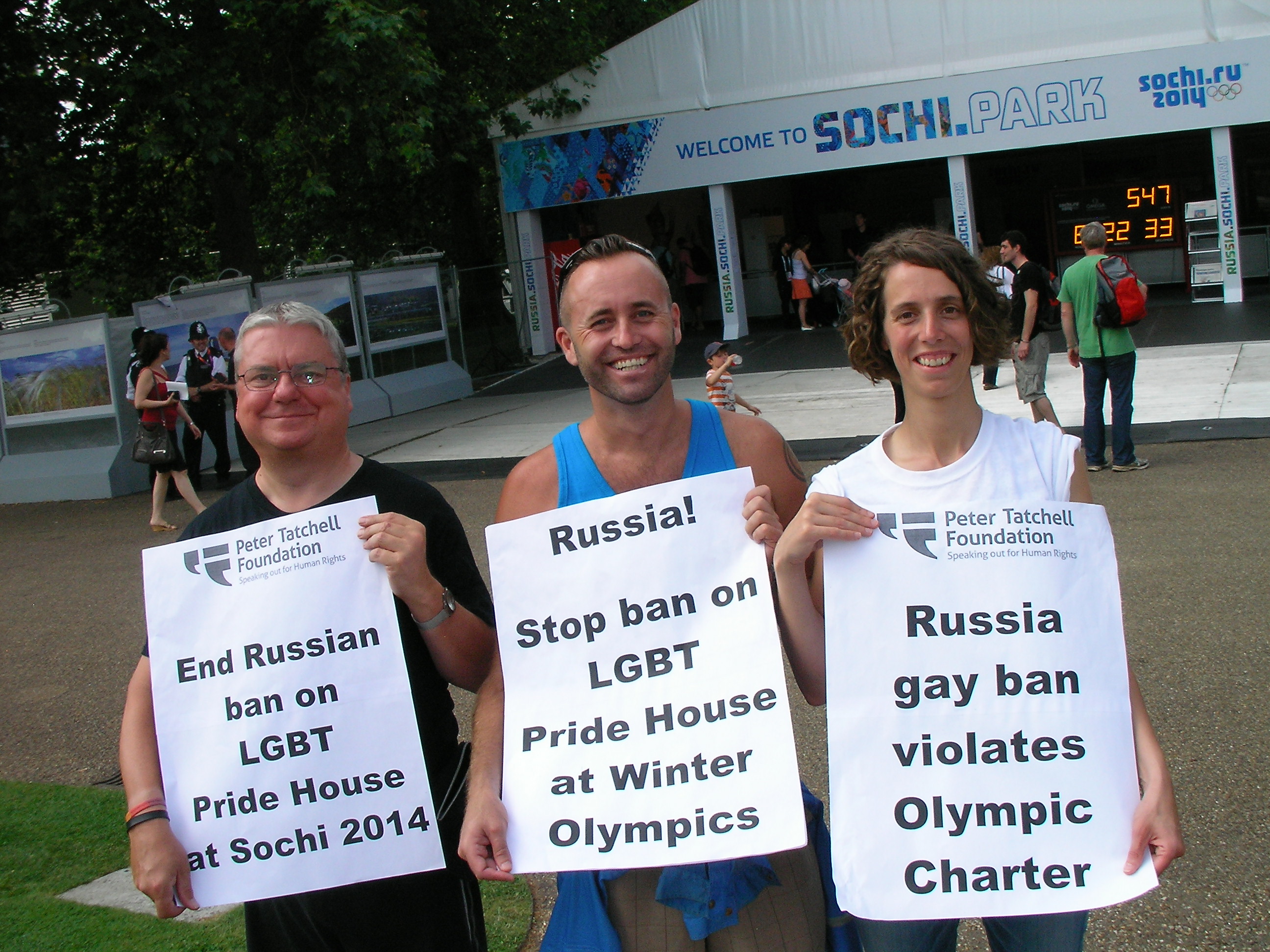 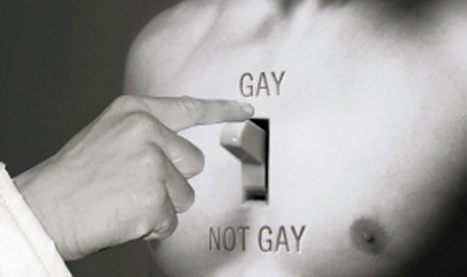 The next gay "cure" sessions are on their way to Australia and the UK! But we know that our plan to stop these dangerous quack treatments is working. We need to ensure we keep up the pressure as these harmful "cures" are being sold around the world.

For more than 30 years a powerful group of religious extremists claimed they were able to cure homosexuality. But the leading organization behind these horrible practices has publicly acknowledged that they were a fraud. These extremist anti-gay groups teach that people who feel same-sex attraction should stifle it - they should smother it so deeply that they don't recognize or love themselves. We have a unique opportunity to give the final blow that will end "gay cures" for good.

They're coming to the UK. This Sunday, an extremist religious group is holding workshops for gays and lesbians on how to hate themselves for who they are. These types of "therapy sessions" collect cash for one purpose only: to sell the idea that people who are not straight should stifle it. And it's not a small fee. These "treatment" sessions can cost up to £525.

But we know our plan is working. The French government has launched an investigation into these false treatments. And in Argentina, the scheduled "cure" session was shut down after our campaign made national news.

We're setting off a global domino effect to shut down these sessions and ban "gay cures" for good. Will you call on the British government to stand against gay "cures"?

These dangerous practices pretend to "cure" people's sexuality when they actually inflict serious psychological harm. The upcoming session planned for London is part of a global tour of gay "cures" that All Out members have been following around the world. We have no time to lose - the next session starts on Sunday. Sign today.

TO: HEALTH MINISTERS AROUND THE WORLD

For the past 30 years, gay "cures" have pushed thousands of gay and lesbian people around the world to self-destructive behavior and even suicide. This needs to stop.

The leading organization behind these gay "cures" has publicly acknowledged that they were a fraud. But one major splinter group, Desert Stream, is refusing to bring this lucrative business to end.

We call on you to denounce and ban these gay "cures" now - and prevent Desert Stream from doing more harm.

Please also tweet the following:
#Gay "cure" sessions are coming to a church near you - and they're making millions! Take action & shut them down: http://www.allout.org/en/actions/endgaycures
Collapse