They are excellent value for money - a small bag is £4 and a large bag £6.

And can be bought here:
http://www.fortnumandmason.com/c-652-fortnum-and-mason-jubilee-bag-for-life-jubilee-gifts.aspx

I never recommend things that I don't buy myself. I have bought these for myself, for my friends, and for my family. So far, they have gone down a storm! Coriolanus, directed by and starring Ralph Fiennes, is now out on DVD.

A clever contemporary adaptation of Shakespeare's play of political power and intrigue, directed by and starring Ralph Fiennes.

An impressive, muscular version of Shakespeare's sometimes overlooked play about power and political pragmatism. The setting - 'a place calling itself Rome' - is a recognisably modern Balkan warzone, and writer John Logan skilfully adapts the Bard's words for more contemporary phrasing. Fiennes takes the role of Coriolanus, the war hero turned politician whose abrasive and autocratic personality does not endear him to the masses. Striking a fine balance between action and political intrigue, Coriolanus is a clever contemporary adaptation, and a most accomplished debut. 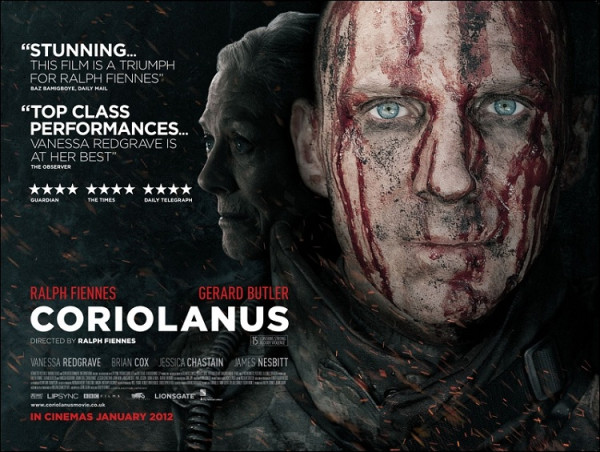 I have been championing this film ever since I saw it as part of the London Film Festival in 2011.

Embarassingly, for someone who claims to know a bit about Shakespeare, I have only ever seen two versions of Coriolanus, and that includes this one. Both versions have had Ralph Fiennes in the title role! The last time I saw Coriolanus was when Ralph Fiennes played the title role in the Almeida's "Shakespeare in Shoreditch" Season, way back in 2000.

Of the two versions (one I am clearly recollecting from over a decade ago) I much much much prefer this film version. Having it set in contemporary Serbia, really brought the play alive for me and I connected with the play in a way that I had not done the last time. Bringing Shakespeare up to date and placing it in a contemporary setting can really make it very powerful indeed IF it is done correctly, and you stay true to the text's intentions. You know that when Ralph Fiennes is in charge (this is his Directorial debut) Shakespeare is in very safe hands. Ralph Fiennes, for me, is by far and away the leading Shakespearian actor of his generation. No contest! This film is a masterclass in how to set Shakespeare in the contemporary world, to fully convey its power and meaning, without compromising at all on artistic integrity.

Ralph's verse speaking is, as always, exceptional. You can easily follow the meaning of the text, and the verse is so beautiful when he speaks it, he really brings out the poetry in it to the full. The verse speaking across the whole of the cast is outstanding; there is real beauty and poetry there; and you can really learn how to use Shakespeare's language to its most powerful effect through watching and learning from the actors here. A surpise for me was James Nesbitt. I have never seen him do Shakespeare before and he really was excellent - off the back of this, I would now love to see him as the lead in a Shakespeare play, either on stage, on film, or on the telly.

For me, one of the key learning points, was how easy it can be to manipulate a mob. They may start off believing one thing, but all it takes is a few strategically and tactically placed phrases, and you can turn the mob and make them believe the complete opposite. And then when the mob have turned and are baying for blood, even the most respected and rational person cannot make them change their minds. That is how easy it is to turn the mob against someone, so that they go from being an admired and revered leader to a hated and detested dictator. Yes, Coriolanus is arrogant, but he by no means, and in no way whatsoever, deserves to be humiliated and banished in the way that happens in the play.

To summarise, I loved this and took it straight to my heart. In a nutshell, this film is a masterclass in how to place Shakespeare in a contemporary setting and not lose one iota of authenticity or compromise a sliver on fidelity to the text. My favourite film of last year, the best film of 2011, towering head and shoulders above the rest, was Coriolanus.

If you want a taster, you can watch the official UK trailer here: Frankenstein
a new play by Nick Dear, based on the novel by Mary Shelley

Frankenstein enjoyed a sell-out run at the National Theatre, and went on to win awards including the 2012 Olivier Award for Best Actor for Benedict Cumberbatch and Jonny Lee Miller.

In cinemas for a limited season from June.

First broadcast to cinemas in 2011, don't miss your chance to catch Danny Boyle's electrifying stage production as screenings take place nationwide and around the world.

Jonny Lee Miller and Benedict Cumberbatch alternated the roles of Victor Frankenstein and the Creature throughout the show's run at the National Theatre - cinemas will offer the chance to see both of these versions.

All the information you need, including the trailer, can be found here:
http://www.nationaltheatre.org.uk/69499/productions/frankenstein-encore-screenings.html

I am using the opportunity to have another look at the Benedict as Creature version of Frankenstein and I will be watching it at my usual NT Live venue, the Brixton Ritzy.

I am tipping this purely on the basis that it is one of my favourite plays. I try and get along to see each and every new version of it! For more details and to book tickets follow the link:
http://www.youngvic.org/whats-on/a-dolls-house

I am tipping this purely on the basis that it is by Neil LaBute. I love his work and I try and get to all of his plays! Mirror, mirror on the wall, if I don’t like what I see I’ll murder them all. Revenge, twisted logic and righteousness mix in this paradoxically gleeful look at taboos and murder. Three separate short plays by world renowned playwright Neil Labute explore whether evil underlines us all, or merely disguises itself frighteningly well in a few.

For more details and to book tickets follow the link:
http://www.offwestend.com/index.php/plays/view/7426

On Sunday 3rd June, as Her Majesty Queen Elizabeth II sailed down the Thames in the Jubilee River Pageant, she received a unique salute from the National Theatre, in association with Handspring UK, culminating in an appearance by Joey from War Horse. Video of National Theatre Jubilee Salute to the Queen with Joey from War Horse:
http://www.youtube.com/watch?v=75blE32JgoU
Collapse