"Chasing Cotards" the short film Andrew Scott was in, and which had a premiere at the IMAX Cinema in Waterloo, is now available to watch online.

It costs £1.49 to rent and will be streamed straight to your computer. Once rented it is available to be watched five times in a thirty day period, (sorry if I've got this wrong, it is explained in the FAQ's on the site).

It is beautifully shot, and has to be seen. Andrew is simply brilliant in it. There is no dialogue, and his facial expressions are heart wrenching.

Below should be the link that will take you to the site.......fingers crossed!

Go watch it......you will not be disappointed.

Ever since Sherlock Series 2 started airing, hits on the community have increased dramatically. However, all records were broken today by Nick Curtis's article in the Evening Standard, where he argued that the Time Lord had been eclipsed by a very modern Holmes, played by Benedict Cumberbatch. 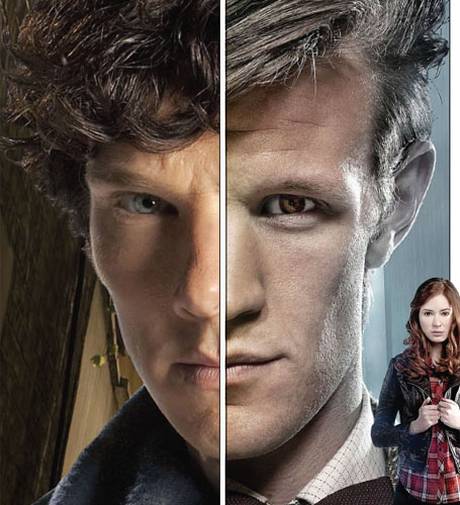 One of the reasons for its success could be the sheer number of tags it has, or it could be the stunning photo above!, or (let's be honest) its more likely to be the quality of the content in the article. Whatever the reason, congratulations Nick Curtis!

The post that broke all records is here:
http://mycroft-brolly.livejournal.com/218409.html "The door opened and Professor Moriarty stood before me", The Final Problem

“His career has been an extraordinary one. He is a man of good birth and excellent education, endowed by nature with a phenomenal mathematical faculty. ... But the man had hereditary tendencies of the most diabolical kind. A criminal strain ran in his blood, which, instead of being modified, was increased and rendered infinitely more dangerous by his extraordinary mental powers. Dark rumours gathered round him in the university town ..."

“He is the Napoleon of crime, Watson. He is the organizer of half that is evil and of nearly all that is undetected in this great city. He is a genius, a philosopher, an abstract thinker. He has a brain of the first order. He sits motionless, like a spider in the center of its web, but that web has a thousand radiations, and he knows well every quiver of each of them".

These passages on Moriarty are some of my favourite in the entire Canon. And there is no way I could finish this post without posting a photo of one of the most recent, and in my humble opinion, one of the best incarnations of Moriarty ever, Andrew Scott (and yes, I admit, I am a trifle biased!). Continuing the series of The Umbrella Organisation bringing you only the BEST articles and features on Sherlock, today I am running an excellent interview with Steven Moffat in Digital Spy. The interview is fab; there are some real gems in there and you can really hear Steven's "voice".

Selected highlights, cut and pasted from the Digital Spy website:

The genius crime-solver Holmes is forced into a deadly confrontation with his arch-foe Moriarty, but will either man survive the Reichenbach fall?

To mark this year's momentous finale, Digital Spy caught up with series co-creator Steven Moffat to chat about Moriarty, the possibility of a third series and the future of John and Sherlock's relationship ...

First of all, how long did it take you to come up with the resolution to series one's cliffhanger?

"It became such a big deal that we actually had to do something - the most unexpected thing. I remember the three of us - Mark [Gatiss] and I and Steve Thompson - were out one night and just thought, 'What if the phone rings?' It's ridiculous, it'll be funny. I mentioned this to Sue [Vertue] - my wife, the producer - and she'd just heard the funniest story about a funeral where the service started, and someone's phone started playing 'Stayin' Alive' - I said, 'That's the one!' I'm very proud of it. Of all the things that people had been wondering about for over a year, I don't think they expected the Bee Gees!"

Did you feel any pressure this year after the enormous success of series one?

"Coming back to a second series of something that's been so beloved - there's pressure, because there's always pressure - but it's incredibly exciting. There's a new spring in the step of the show, I think, particularly with Benedict. As brilliant as he was, suddenly he knows he's a star. Same thing happened with Matt Smith - you saw it in last year's [Doctor Who] Christmas special. It was the first time Matt had played the Doctor knowing that he was a hit. You're seeing Benedict flourish into it, and just being such a star."

And were you nervous about tackling the most iconic stories in the Holmes canon?

"We're fanboys of Sherlock Holmes, so we can't wait! Someone asked [myself and Mark] what we do when we disagree, and we realised - slightly chillingly - that we never do! We can barely get the sentence out before the other's completing it. I swear, he could take over this interview and you wouldn't know the difference, except I'd suddenly have become better looking and better dressed!"

"We're very, very old friends, so we're having about as much fun as we could ever imagine having! I remember once, back in [BBC Wales studio] Upper Boat, you had the TARDIS in one studio and the next studio was 221b Baker Street. Mark grabbed my arm and said, 'It's like a map of our brains!'"

Having been a success, was it easier to forget the likes of Basil Rathbone and Jeremy Brett, and write your own take on Holmes?

"To be honest, I don't think we ever really forget them, because we love them. I still watch Sherlock Holmes films, if anything with more excitement, because I've been there."

"But at the very beginning, we had a moment of trying to decide how Sherlock would talk in the modern world. You can't make him talk like a completely modern person, so how far do we go? But I think Sherlock's shifted slightly this year - I think he's shifted slightly more Victorian, just a little. We were always very cautious in the first series that he never sounded like he's giving a lecture, but Benedict's got that beautiful voice and you sort of want him to give a lecture! So we've shoved him a little bit that way. It's really only a matter of phrasing. I mean, I don't believe that a modern young man would actually say 'Elementary' - I just don't. But I believe that he would say something equivalent."

Moriarty returns in force this week. This show's take on the character is rather unusual...

"It's an odd one with Moriarty. I think with Sherlock and John, we've actually stayed quite close to the original, but just modernised them. The scenes with Moriarty in the original are brilliant, but every single super-villain who's ever in comics or novels or movies ever since has been an imitation of him. If we did Moriarty that way now, he would look like a hoary old take-off of a super-villain. So we just thought, what would really scare Sherlock Holmes?"

"Andrew Scott became a star - which he absolutely deserves to be - on the basis of being in the last three or four minutes of Sherlock. His screen-time was tiny but it's a measure of that man's extraordinary talent that he's become such a big deal so quickly. He's a genius."

Are you planning to make a third series of Sherlock?

Follow the link to read the full article:
http://www.digitalspy.co.uk/tv/s129/sherlock/interviews/a359357/sherlock-steven-moffat-interview-holmes-might-not-survive.html
Collapse